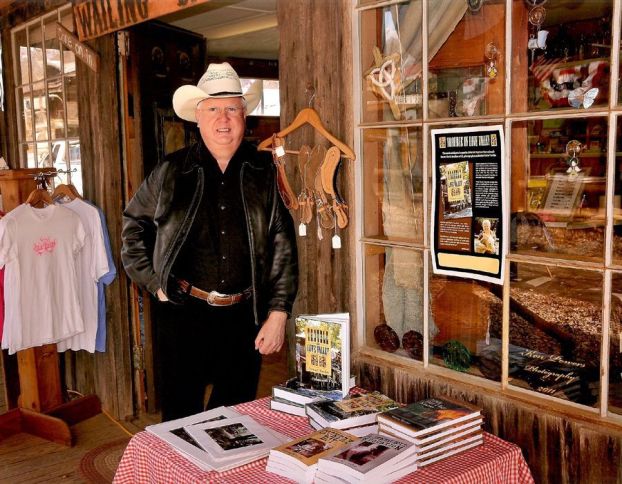 A couple of weeks ago I wrote about Cotton Ketchie’s expertise as an artist and photographer. Although I’ve known him for only a few months, he’s so warm and friendly, writing about him is like writing about an old friend.
Cotton has always loved to draw, but it wasn’t until 1975 while taking lessons through Mitchell Community College at the War Memorial Center in Mooresville that his work as an artist began to mature.
Encouraged by his instructor, the late Don Chapman, and fellow art students to give watercolors a try, Cotton discovered not only a love for the art form, but a talent. After much practice and a growing fan base, Cotton eventually opened the Landmark Galleries on North Main Street in Mooresville. Always taking photos for his sketches, he didn’t become a professional photographer until everything went digital.
There’s no doubt being talented as an artist and photographer would be enough for most people, but Cotton’s talent doesn’t stop there. Also gifted as an author, writer and musician, before Cotton took up painting he used to write songs.
Composer and musician friend Tim Brown of Salisbury helped write the song, “Oh, My Jesus.”
“I would be hard-pressed to find that sheet music now,” Cotton said, “but years ago that song was sung by local churches at Easter time.”

Even today with a busy lifestyle, Cotton still finds time to play the guitar and sing. Enjoying a jam session with songwriter friend Stephen Brooks, from time to time, Cotton admits Stephen’s the professional. In reference to his own ability as a singer, Cotton said, “We only had one Singer in our family and it was a sewing machine.”
As an author, Cotton has published two autobiographies and two novels. Based loosely on a fictional artist from Mooresville, his latest novel centers around the town known to many as the Cowboy Capital of North Carolina, Love Valley.
By contrast, his autobiographies are steeped in truth and honesty of what it was like to grow up as a country boy in rural North Carolina, during the middle of the 20th century. A photo of Cotton as a little boy at about the age of 3 or 4 is on the cover of each autobiography. In one photo, he’s in overalls standing at the back door of his house, while in the other, he’s on a tricycle wearing shorts, suspenders and a T-shirt.
Born in 1944 and named after his dad, Millard Vincent Ketchie, by the time Cotton was 3, he already had a “cotton top,” so thus his nickname. Preferring Cotton to the given name of “Millard,” Cotton said, “That name was too much of a burden for any little boy to carry.”
Cotton’s autobiography, “A Country Boy’s Education,” gives the reader a behind the scenes look of family life post-World War II. Cotton was by no means abused, but he said his dad did know how to pull off a belt and use it when necessary. In other words, there’s no denying Cotton’s education consisted of not only what he learned at school, but also what he learned at home from a mom and dad who believed in “sparing the rod, spoiling the child.” One must wonder how mischievous Cotton really was when he says, “I deserved every whipping I got.”

Recalling the rule of no running in the house, Cotton figured out the reason for that rule quickly enough when he cut a corner too close, hitting the edge of a table with his mouth. The accident, or incident, depending upon perspective, happened while chasing his sister. Losing a tooth in the mishap, Cotton said, “That was one tooth my dad didn’t have to pull. Come to think of it, I not only lost a tooth, but I got a whipping to boot.”
“Memories of a Country Boy,” contains even more stories of that day and time, including one of Cotton watching his daddy shave.
“My daddy had a big, Old Spice mug with a cake of Old Spice soap nestled in the bottom,” Cotton recalls. “I’d watch him wet his brush in the sink that was filled with hot water, swish it over the cake of soap, and then brush the lather all over his face. It was fun watching him shave as he made clean pats up and down his face with his trusty Gillette razor … When the last of the shaving soap had been cleaned off his face, Daddy would splash on a little Aqua Velva after-shave lotion to complete the ritual. I can still remember that smell.”

Since most country boys and girls have some kind of watermelon story, this next one’s for you.
Cotton writes: “Ice-cold watermelon was one of my favorite treats during the ‘Dog Days’ of summer … I vividly remember an incident that took place in my life when I was about 9 or 10. One day, I stealthily sneaked into Uncle Frank’s nearby watermelon patch. He had some of the biggest watermelons I had ever seen. I had been watching them grow all summer and already had one picked out. I felt it truly belonged to me. After all, I was the one who had been coveting that watermelon for months. It was so big I couldn’t even lift it off the ground …
“I never was a rocket scientist and didn’t know much about physics, but I figured I could roll that sucker through Uncle Frank’s little patch of woods and hide it behind Grandma’s barn in the haystack. That worked out well, but by the time I accomplished all the manual labor, it was late, and I had to go home …”
Not knowing his dad had seen him hide the watermelon, imagine Cotton’s surprise the next day when he discovered his watermelon was gone. Revealing he knew all along about the watermelon, Cotton’s dad said the punishment was an apology to Uncle Frank. Being one of the hardest things he ever had to do, Cotton was grateful his uncle was a forgiving man, reminding him to ask first the next time he wanted a watermelon.

Cotton shares his thoughts — the good, the bad and the ugly — with 6,000 followers on his Facebook page each morning.
When I started following Cotton about four months ago, amazed at the detail he includes, I soon learned he gets up as early as 3:30 a.m. to write his daily thoughts. They’re sometimes funny and sometimes inspirational. It’s almost like sitting down with a friend over a cup of coffee, except instead of coffee, it’s the computer screen.
One recent post included thoughts about the crazy weather we’ve been having this winter.
“I don’t want to wish my life away, but I’m ready for spring,” Cotton said. “I’m almost scared to watch the weather forecast anymore because I’m afraid it’s going to snow again and they’ll call spring off all together. That crazy groundhog has really done it this year. Somebody should tell that rodent enough is enough.”
I’m with you on that one, Cotton.

North Carolina is lucky to have a talented man like Cotton who not only cares about others, but cares about leaving a legacy behind of preserving landmarks and everyday events through photographs, art and the written word.
Knowing he’s blessed, Cotton sprinkles references to his faith throughout his work, including a reference to one of his favorite poets, Robert Frost, and his poem, “Birches.” About climbing trees, the end of the poem especially speaks to Cotton’s heart, reminding him even on bad days or when having to make difficult decisions, that God is in control. A willing vessel, just like the canvas he paints on and the blank page he writes on, Cotton knows he’s still a work in progress.
Little did Cotton imagine as a country boy growing up just outside of Mooresville what an inspiration he would be to others someday. Then again, like Robert Frost inspired him, he, too, is inspiring others. And, for that, Cotton Ketchie, we’re forever grateful.

Your daily look at late-breaking news, upcoming events and the stories that will be talked about today: 1. ANALYSIS LEADS... read more