Michigan hangs on to advance to Elite Eight 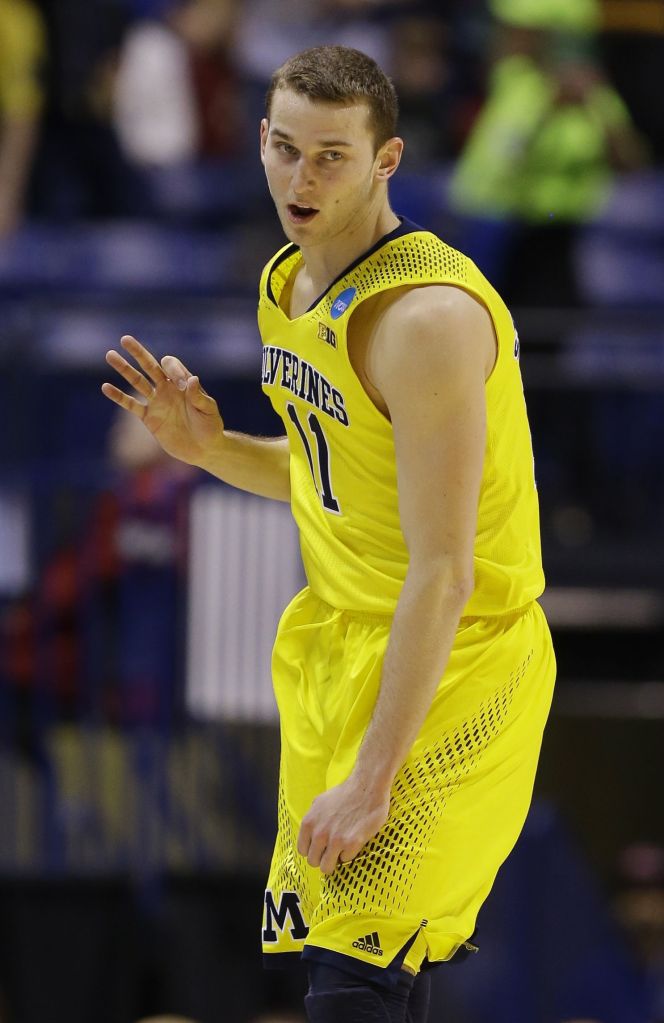 INDIANAPOLIS — Jordan Morgan scored 15 points and Nik Stauskas had 14 including a key free throw to help Michigan hold on for a 73-71 victory over Tennessee in Friday’s first Midwest Regional semifinal.
The second-seeded Wolverines now play either Louisville, who they lost to in last year’s national championship game, or 2012 national champion Kentucky Sunday.
The Wolverines (28-8) led by 15 with 10:55 to go, but committed four turnovers in the final 97 seconds. Tennessee (24-13) cut the lead to 72-71 and had a chance to take the lead, but Jarnell Stokes was called for an offensive foul with 6 seconds left.
Stauskas then made 1 of 2 free throws and Tennessee’s long desperation heave was off the mark.
Jordan McRae scored 24 to lead the 11th-seeded Vols.
For most of the first 36 minutes, Michigan was in firm control.
Then came a stunning turnaround by Tennessee, a bubble team that had to win a first round game just to get into the round of 64.
When Stauskas, the Big Ten player of the year, knocked down a 3-pointer with 3:37 to go, the Wolverines led 70-60 and looked like they would cruise.
Instead, Tennessee gave up just one more basket and steadily took advantage of Michigan’s miscues. When McRae completed a three-point play with 1:56 left, the Vols trailed 72-67. Richardson’s layup made it 72-69 with 24.6 seconds left and when the Wolverines threw away the ball on the next possession, McRae’s layup cut Michigan’s lead to 72-71.
Another turnover on an inbounds play gave Stokes the chance to put Tennessee ahead.
But Stokes, who contended he did not commit the foul, was called for the charge and the Vols’ comeback was over.
Michigan should be getting used to these sorts of finishes in Indianapolis.
Two weeks ago when they were in Indy for the Big Ten tourney, the Wolverines had to hang on twice after seemingly having comfortable leads against Illinois and Ohio State. Eventually, they wound up losing to Michigan State in the title game.
Their inability to put a team away nearly did them in Friday.
It sure didn’t look like it would come down to the final shot when Michigan shot 61.5 percent from the field in the first half and led by as much as 13. Or even in the second half when they led by as much as 15.
But Tennessee buckled down defensively and rallied to cut the lead to six with 6:41 to play before the closing rally.