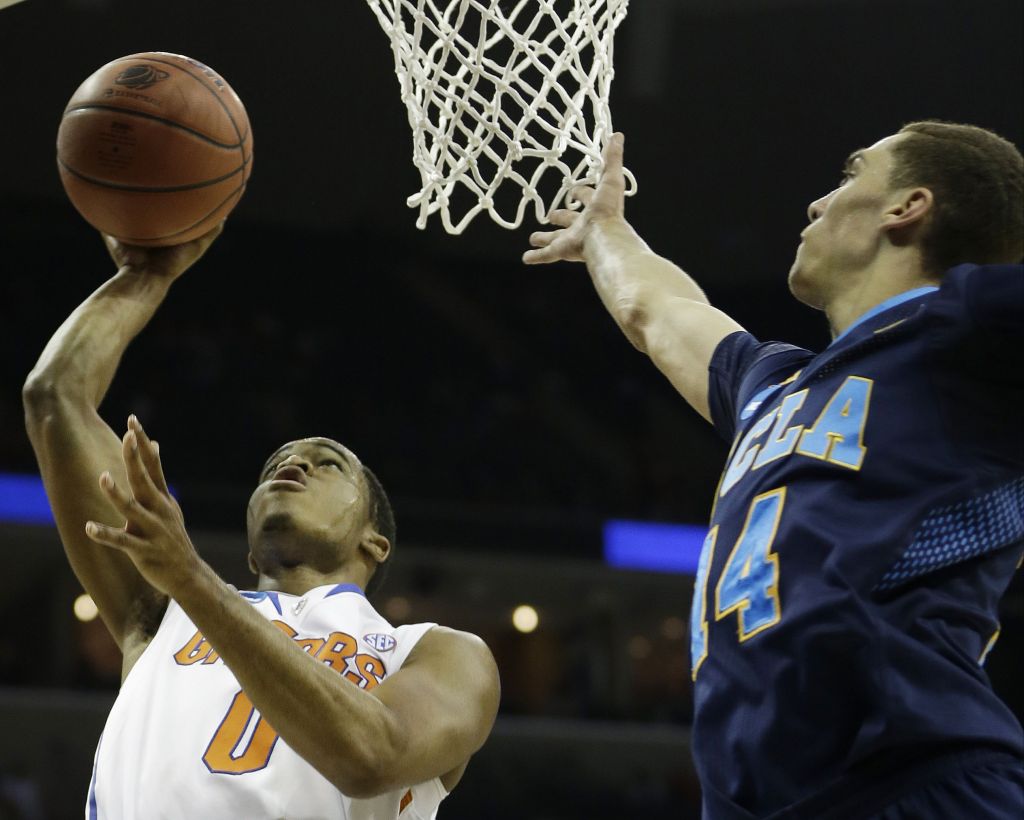 MEMPHIS, Tenn. — Florida is back to where its last three seasons have ended.
Michael Frazier II hit five 3-pointers and finished with 19 points as the Gators beat UCLA 79-68 Thursday night to reach its fourth consecutive NCAA regional final.
The Gators (35-2) also extended the best winning streak in school history to 29 straight in reaching the South Regional final. The tournament’s overall top seed will play 11th-seeded Dayton on Saturday night for a trip to the Final Four.
Scottie Wilbekin added 13 points for Florida. Casey Prather had 12 points, and Dorian Finney-Smith had 10. Kasey Hill had 10 assists.
UCLA (28-9) was back in a regional semifinal for the first time since 2008 under first-year coach Steve Alford. But the Bruins just couldn’t match Florida’s physical defense or outshoot the Gators.
Florida shot 50 percent for the game (29 of 58), including 59.3 percent in the second half. UCLA finished 42.2 percent (27 of 64) shooting in only their fifth game scoring under 70 points this season. The Bruins were a cold 1 of 12 beyond the arc in the second half.
Jordan Adams led the Bruins with 17 points, Kyle Anderson had 11 and five assists with nine rebounds. Travis Wear added 14.
Frazier showed off the Gators’ shooting skills. He had hit only 3 of 13 beyond the arc through the Gators’ first two tournament wins but went 5 for 6 against UCLA.
The Gators led 36-30 at halftime and clicked on a different level in the second half. They hit their first six shots and eight of their first 10. Every time UCLA tried to make a run, Florida answered. First, it was Frazier hitting consecutive 3-pointers as UCLA pulled within 43-39.
When the Bruins pulled within 56-55 on a layup by Norman Powell midway through the half, Finney-Smith hit a jumper for the first of 10 straight points. The Gators had UCLA running up and down the court so much that Adams couldn’t even hit the rim with a jumper despite having an open look at the basket.
Wilbekin finished off the run with a three-point play that had the Gators solidly in control, up 66-55 with 5:34 left.
For all the talk of Florida’s stingy defense, UCLA opened the game blocking the Gators’ first two shots. The Bruins only blocked two more shots the rest of the game.
The Bruins came in as one of the nation’s best scoring teams, averaging 81.5 points a game. Florida showed early it could shoot too, hitting 5 of 8 beyond the arc in spurt that turned a 14-11 deficit into a 20-16 lead. Back-to-back 3s from Frazier put the Gators ahead to stay.
Every time Anderson got the ball near the UCLA basket, he found himself with at least two Gators trying to smother him.