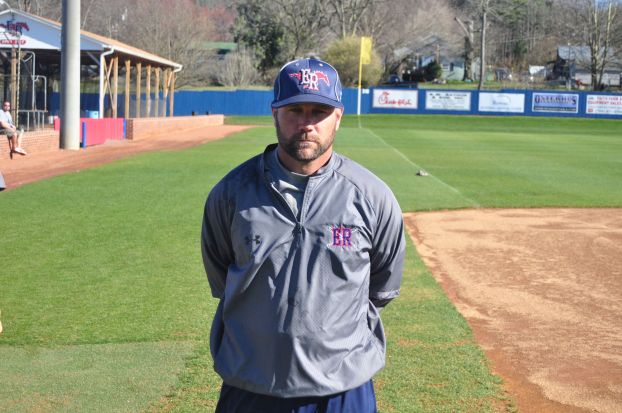 GRANITE QUARRY — A game between the first and last place teams is not supposed to be this close but for the second night in a row it was just that.
East Rowan squeezed past Northwest Cabarrus, 2-1 Thursday night at Staton Field to complete a sweep of their South Piedmont Conference regular season series. The win kept East (8-2, 8-5) on top of the SPC standings, beating the last place Trojans (0-8, 1-9) by a single run on consecutive nights.
Without question, the difference was Mustang lefty Connor Johnson. The senior pitcher improved his record to 5-0 on the season in a spectacularly efficient manner, allowing four hits, no earned runs and striking out nine.
He walked no one, faced just two over the minimum and retired 11 of the last 12 batters he faced. Yet this one was far from a cakewalk as the Trojans battled to the last at-bat, stranding the tying run at second in the top of the seventh.
“I try not to think about that (a tight game) too much”, Johnson said after his 75 pitch performance that relied primarily on his fastball. “I just deal with each batter as they come and don’t worry about runners or other things.”
Johnson was at his best in the seventh with the 2-1 lead when he struck out the leadoff man then gave up a double down the right field line to Adam Barrows. But he got both Wyatt Taylor and Max Barrios to go down swinging to end the game in an unusually speedy one hour and 10 minutes.
“Johnson was good tonight,” East Coach Brian Hightower said in the understatement of the year. “He just put it in cruise control after we got ahead. And he is only going to get better as we go along because that is what he is all about.”
The two teams crammed all of the scoring into the second inning as the Trojans went up 1-0 on a Taylor single and a pair of East throwing errors on consecutive plays.
The Mustangs responded in the bottom of second with some creative baserunning to claim the lead for good. Luke Setzer singled, Scott Sapp doubled in the gap then Sam Wyrick tied the scored with a single that dropped into center. With runners on the corners, Wyrick broke for second and drew a throw. When the ball bounced in front of second base, Sapp sprinted home from third with what amounted to a double steal.
“I saw the ball go past the pitcher and I just took off,” Sapp stated. “I just read it but I didn’t think about it being the winning run because it was so early in the game but it ended up getting the job done.”
Neither team truly threatened after the second as Johnson and his Trojan counterpart Phillip Faggart battled pitch for pitch in the latter innings. Johnson was dominant but Faggart was nearly as impressive as he shut the Mustangs down over the last three innings on two hits. The senior righthander effectively scattered eight East hits for the game, striking out two and receiving an error free effort from his defense. But it was not enough to overcome Johnson and the Mustangs.
“We are playing as hard as we can and are really getting after people,” veteran NWC Coach Joe Hubbard stated. “I am not dissatisfied. We are playing great but we have just got to have that one guy step up at the right time and make it happen.”
The win for East, coupled with South Rowan’s loss to Carson last night, gives the Mustangs sole possession of the first place in the SPC for now. But they face a big series next week with West Rowan starting Tuesday night at Staton field.