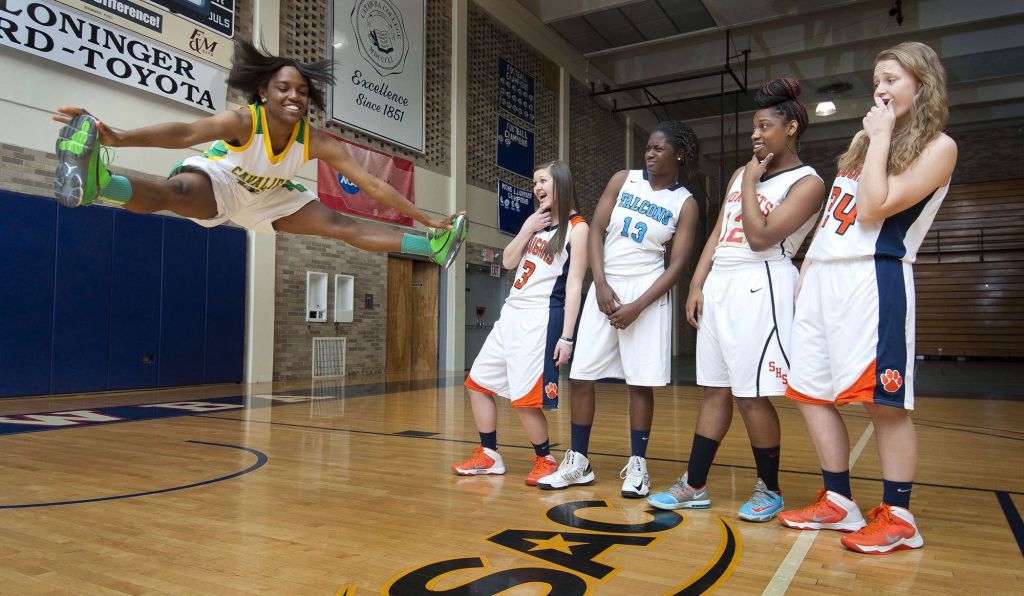 SALISBURY — Here’s a trivia question for those of you who follow Rowan County basketball closely.
Who’s the only four-time all-county player, boys or girls, on this year’s team?
The correct answer is … North Rowan guard Nycieko Dixon, who made the team three times as a West Rowan Falcon before playing her senior season in Spencer.
South Rowan junior Avery Locklear, the player of the year, is a three-time honoree and will be a four-timer next season as well as her school’s all-time leading scorer — assuming she stays healthy.
Brielle Blaire obviously would’ve been a four-timer and would’ve been a player of the year candidate had she been blessed with health, but her senior season ended in North’s eighth game.
East Rowan senior Karleigh Wike is all-county for the third time. North junior Demeria Robinson, South junior Cassidy Chipman and West Rowan sophomore Khaila Hall are honored for the second time.
The team:
Avery Locklear, South, Jr. — The county’s leading scorer at 20.2 points per game. She scored 20-plus in 14 of her 21 games. She’s had three straight 400-point seasons and is South’s single-game record-holder with a 43-point outburst.
Karleigh Wike, East, Sr. — The Richmond signee scored in double figures 20 times this season, and East went 19-1 in those games. Her 13.4 points per game told only part of the story. Besides 1,170 career points, she had 1,291 rebounds and 477 blocked shots. Wike was named SPC Player of the Year.
Alex Allen, Carson, Jr. — Allen played sort of a point forward for the Cougars and was the team’s best scorer, rebounder (9.6 per game) and passer. She averaged 16.0 ppg. and her 416-point season was the third-highest in Carson history. She’s on track to reach 1,000 points next season.
Cassidy Chipman, South, Jr. — Chipman can bury 3-pointers (a county-leading 61), and the rest of her game improved dramatically. She was a key defender in South’s press with 83 steals and averaged double-digit rebounds. She scored in double figures in 22 of 28 games. She had outings of 30 and 32 points, and while she dealt with an injury late in the season, she still averaged 15.9 ppg.
Khaila Hall, West, So. — Hall’s jumpshot is a work in progress, but she can run and jump with anyone and she carried the Falcons frequently. She had a 29-point outing this season and two 28s and was in double figures in 21 of 25 games. She averaged 16.4 points and is on track to reach 1,000 points as a junior.
Nycieko Dixon, North, Sr. — Very quick, the Christmas tournament MVP piled up points with a mix of 3-pointers and transition layups. She scored 1,343 career points and was in double figures 21 times in North’s 23 games with a high of 30. She made 45 3-pointers and averaged 15.5 ppg.
Kelli Fisher, East, Jr. — Fisher just missed all-county each of the last two years, but she was an easy pick this time as East’s leading scorer. She was hard to keep off the offensive board and pulled down 9.7 rebounds per game. She shot 53 percent, scored 20-plus points six times and averaged 15.3 ppg. Fisher has 908 career points.
Demeria Robinson, North, Jr. — Robinson is small, but she’s the engine that makes North’s offense and defense go. She had team highs of 68 assists and 82 steals. After an early shooting slump, she scored in double figures 14 times, including 26-point and 23-point efforts. She averaged 11.7 ppg. She’s also headed for 1,000 points. She finished the season with 835.
Kate Cole, Carson, Sr. — Cole hit 42 3-pointers on her way to averaging 12.1 ppg. She showed a lot of leadership for a young team, made many clutch free throws in Carson’s 13 wins and was one of the county’s most improved players.
Monifa Angle, Salisbury, Sr. — Angle was Salisbury’s leading scorer at almost 12 ppg. and was in double figures 15 times. She had a season-high of 25 in a win against Carson.
Taylor Martin, West So. — An undersized bundle of energy, she contributed 32 minutes of relentless hustle and averaged a surprising 11.3 ppg. on a combination of 3-pointers and layups. She scored in double digits 15 times in 22 games, including the last two after she returned from a concussion.
Lynsey Corriher, South, Sr. — Corriher is the only player on the team who didn’t average double-digit points, but her return from a torn ACL was a huge part of South’s strong season. She averaged 7.4 points and 7.4 rebounds, led South in blocks and shot a solid 49 percent from the floor.