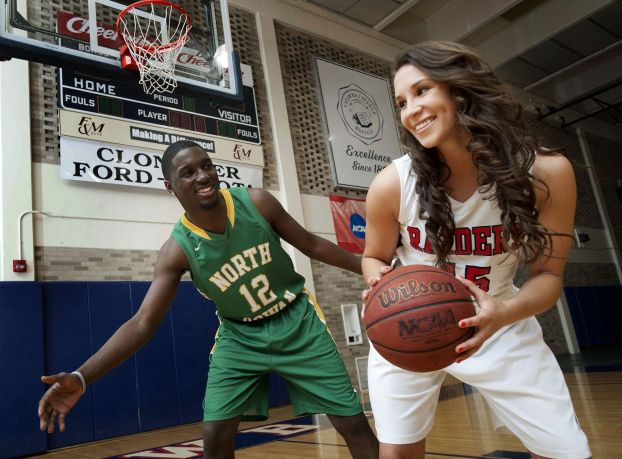 SALISBURY — The South Rowan girls program reached unexpected heights this season, enjoying its most successful run in 15 years.
At the center of the resurgence was do-everything, all-around-scorer Avery Locklear.
Locklear, who poured in 20.2 points per game to lead the Southern Piedmont Conference and Rowan County, capped her stellar junior season by garnering county player of the year honors.
“It’s awesome,” she said with a smile. “We’re in a great county with awesome players. Looking around, there are a lot really good players, so this really means a lot. You have [East’s] Karleigh [Wike] going to Richmond and other girls who can play Division I basketball in the county, so it means a lot. It’s really exciting.”
Locklear led the Raiders to an 18-10 mark on the year, which included an 11-4 record in the rugged SPC, and a berth in the third round of the 3A state playoffs. The run ignited the community as South girls’ contests became one of the hot-ticket games in the area every week.
“We had a really good season. We had a great team; a really unique team. We weren’t the tallest, but we played hard every single game,” Locklear explained. “This is the best team we’ve had in a long time here. We were able to pull together.”
“We had those huge crowds at the end of the season and the student section of the Lady Raider Rowdies, so it was really fun,” head coach Jarrod Smith added. “It was exciting because the girls were having a great time and got used to winning. And that’s something that is the hardest thing to teach no matter how talented you are. We finally got there where we got used to winning and didn’t expect to lose.
“It meant a lot for our community,” he continued. “We had a lot of people go with us to the Freedom game (in the third round); we had a student bus up there, which probably isn’t something that’s happened to girls basketball in a long time. It was very exciting to see happen.”
And leading the charge was Locklear.
“She had a great season,” Smith said after collecting his thoughts. “She’s the ultimate teammate. She works harder than almost anybody. When she’s not practicing with us, she’s practicing with her AAU team. She’s worked very hard to get to where she’s at now.
“And the best news about her, she’s just a junior.”
Her crowning achievement came just six games into the year when Locklear sank a free throw to break the 1,000-point mark, becoming just the ninth player in program history to accomplish the feat. She was also one of seven county players to hit the milestone this season.
“Scoring 1,000 points has always been a goal of mine,” she said. “And to be able to reach that, especially in my junior year, is really exciting.”
But it wasn’t all roses for the junior this year, however, after a broken bone in her hand forced her to sit out seven games.
“It was hard having to watch those games,” she admitted. “My teammates were really supportive the whole time. Once I came back, I wasn’t even out of rhythm. I still practiced the whole time, even though I had to only practice with one hand.”
“We struggled a little bit without her and that showed how important she was to the team,” Smith added.
After returning from the injury, Locklear and the Raiders won seven of their last eight to close the regular season in second place behind East. South advanced to the SPC tournament championship before losing to the Mustangs.
The Raiders’ run continued in the playoffs, notching an easy 71-57 victory over Southern Guilford in the first round for the first postseason victory since 1999. South then edged rival Carson before losing to Freedom in the third round.
“The best season since the 1990s ­— that was pretty awesome,” Locklear said. “We knew everybody’s dedication was there coming into the season. Everybody wanted to play and do well, so that helped us a lot.”
Locklear was at her best on the biggest stage, averaging 26 points per game in the playoffs, including a season-high 29 against Southern Guilford.
“She’s a gamer,” Smith said. “You always know what you’re going to get out of her. You’re going to get 15-25 points, 5-7 rebounds, a few assists and a few steals. You never walk into the gym wondering if you’re going to get a game out of Avery.
“I probably have one or two colleges every few days calling about her,” he continued. “She’s a special player: she can score in any way, shes’s got a lot better defensively and rebounding, her assists have gone up and she broke the 1,000 point mark about five or six games into her junior season…I guess she’s going for the record now.”
And that record is in serious jeopardy, as is the legendary 2,000-point mark. Locklear finished the year with 1,300 career points, only 229 shy of front-runner Jill Cress’ mark of 1529.
With preparations for next season already gearing up, South will have a bullseye on its back heading in with a roster loaded with talent and experience.
“We’re only actually losing one senior (Lynsey Corriher) from the team, but I’ll think we’ll be able to come together,” Locklear said. “We’ll have nine seniors next year, so you’ll basically see the same team next year.”
“We’ll miss Lynsey, she did a lot for us. I think we’ll find a way to replace her stats, but we’ll just have to find a way to replace her leadership,” Smith added. “Obviously expectations will be high, but we can’t sneak up on anybody now because everybody knows that we have two of the three leading scorers (Locklear, Cassidy Chipman) in the conference coming back, two of three leading scorers in the county coming back. The higher expectations are great and they’ve earned those expectations.
“It’s exciting,” he continued. “And it’s been a while since South Rowan has been excited about the girls basketball season next year.”