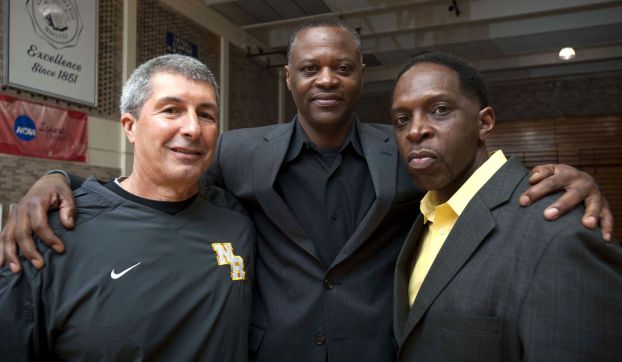 SALISBURY — In six years as a high school basketball coach, Andrew Mitchell has been named Rowan County Coach of the Year five times.
Twice as the coach of the Salisbury girls where he went 58-3 and was 2-for-2 on state championships, and now three out of four years as the driving force for North’s boys where his his teams have gone 100-19 with one state title (2011), a state runner-up finish (2014) and three regional appearances.
“He’s the smartest, most passionate guy I’ve ever known,” North assistant Tim Bates said. “He gives his heart to coaching and to these kids, and I can’t tell you how much it means to the North community to have him building up these young men. He gives them confidence they’ll need to succeed in life.”
Mitchell has unusual powers of motivation and communication, but he’s quick to point out that good players make good coaches.
He’ll also tell you that North’s assistant coaches, led by veterans Bill Kesler and Bates, have been instrumental in North’s success. Bates was Mitchell’s teammate back to their high school days at North. Kesler was one of Mitchell’s coaches when he played for the Cavaliers in the 1980s.
“We don’t make the run we made without the assistants working as hard as they do,” Mitchell said. “With the HUDL technology we can watch film of any opponent. All three of us study that video and all three of us see different things. We’ve got a great working relationship, and we prepare our guys. We don’t always agree on everything, but we always find common ground.”
Pregame, Kesler gives North’s players the scouting report on the opponent’s offense and defense. Bates analyzes individual strengths and weaknesses. “Can’t go to his left” or maybe “Great shooter. Got to make him put it on the floor.”
As far as game management, Mitchell can focus on either an opponent’s offense or its defense, with Kesler studying the opposite side. Bates tracks fouls and charts North’s shots to see where on the floor the Cavs are scoring — or not scoring. Bates also tracks rebounds and assists, so if anyone’s not getting it done in those categories, they can expect to get an earful from Bates at halftime.
Mitchell is a player’s coach, but if they need chewing — such as after North’s dismal performance against Mooresville early this season — he’s not gentle.
“There are times I’ve got to be hard on the players, but I’ve got assistant coaches who will explain to a player why I had to get on them,” Mitchell said. “If I’m hard, the assistants can be soft. There are other times, when the assistants can be the tough ones, and I can be the soft one because you don’t want to be that ugly guy all the time.”
Mitchell said Kesler is one of the most knowledgeable X’s and O’s minds around.
“He’s got two sons and one graduated from UNC and one from Duke, and he’s worked camps for both schools,” Mitchell said. “He knows Dean Smith stuff and he knows Coach K stuff. One of the first things I did when I was hired at North was tell them I really needed Bill as an assistant coach.”
North (21-6) won the Christmas tournament and shared the CCC regular-season title with a 9-1 record, but it did face some adversity. There were back-to-back, draining losses to Winston-Salem Prep and Concord at one point.
“We just had to understand that we were still a good team,” Mitchell said. “Those were great teams we lost to, and with a few more free throws we win both games. Then the CCC tournament championship game at Lexington, we put it all together. When we got into the playoffs, our plates were full, one great team after another, but we made a great run together. To see our guys still standing out there in the state championship game against Kinston, still fighting for each other and their school, I can’t tell you how much pride I felt.”
Mitchell’s 2A state runner-up medal didn’t stay around his neck long. He immediately handed it to wheelchair-bound Michael Ranson, who is North’s biggest fan.
“That’s Andrew Mitchell,” Bates said. “If he ever wins a million dollars, he’ll still be broke because he’s going to give you the shirt off his back. He’s a guy kids love to play for. A guy like that, you’re proud to always have his back.”