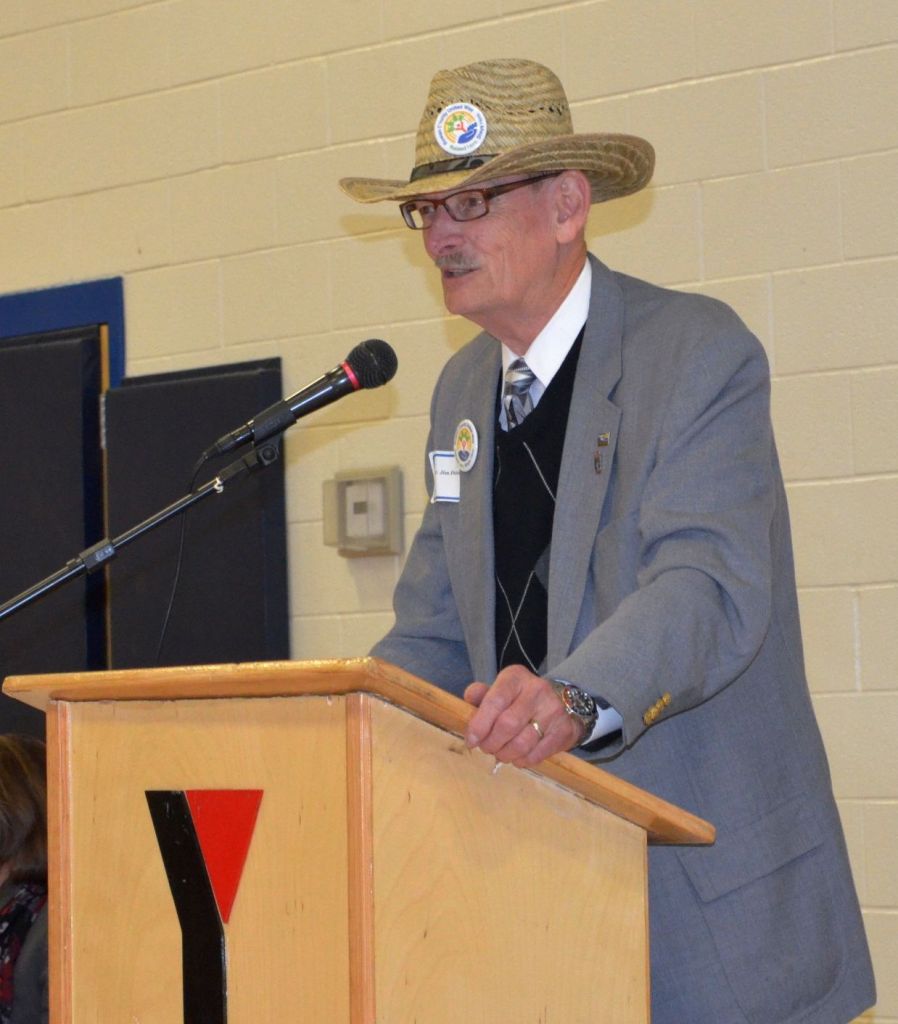 SALISBURY — Supporters and friends of the Rowan County United Way gathered Wednesday for the agency’s annual meeting, held at the J. F. Hurley Family YMCA.
With the 2013 fundraising campaign goal of $1.825 million met, the local United Way and its 15 member agencies are now looking ahead to the challenge of 2014.
Alan King, outgoing United Way president, shared a quote from a United Way volunteer: “When we help others, we make our life stronger.”
The luncheon meeting included honors for the volunteers, board members and officers who make the annual fundraising drives successful.
“What amazes me about Rowan County is the caring attitude that sees us throughout our campaign,” King said.
He said many Rowan County residents love to give, and those employees who make the least money sometimes give most generously.
Dr. Jim Duncan, 2013 campaign chair, donned a straw hat — a reference to the “Raised Here, Stays Here” theme of this past year’s fund drive.
“You did it,” Duncan said to the audience. “… I know you work hard, I know you care for our community.”
Funds raised by the United Way support member agencies in the community.
The United Way also serves the community through grants, programs and activities that improve residents’ quality of life and meet local needs.
Among these programs was the 17th annual Day of Caring, held Sept. 12.
More than 600 volunteers from 50 different agencies and schools, and over 45 companies and community groups, took part in projects throughout the community, according to the Rowan United Way’s 2013 annual report.
Other outreach efforts included the re-establishment of the Christmas Bureau — a collaboration among local agencies under United Way leadership to collect toys and gifts for Christmas 2013.
“That allowed us to serve 2,591 individuals this holiday season,” Duncan said.
Among the urgent local needs that United Way helped support within the past year were two that impacted local agencies.
The Community Chest Fund offers emergency assistance for member agencies and acts as a “safety net” when unforeseen circumstances arise.
Laurie Ward, human relations and development director for the Rowan County YMCA, said that a Community Chest Fund grant, plus an agency award, helped local YMCA branches upgrade lifts that provide access for injured and disabled individuals.
Without that support, Ward said, “we would not have been able to provide service for citizens.”
Renee Bradshaw, executive director of the Family Crisis Council, said the Community Chest Fund helped her agency deal with frozen pipes and heating system problems this winter.
Those funds helped insulate the attic at her agency’s facility, Bradshaw said. “And, for all of you who helped raise these funds, thank you,” she said.
Mike Williams, newly elected president of the Rowan County United Way, sees signs of hope in the year ahead. Williams said that improving economic reports, and some new hiring at local businesses, were reasons to hope for more growth in 2014.
His goal, Williams said, will be to help communicate the importance of United Way to more local residents and workers.
“The need is there,” Williams said. “We’re going to maintain a high level of enthusiasm, and year-round awareness of who we are and what we’re funding.”
The 2014 campaign’s fundraising goal will be announced later in the year, once the new campaign cabinet has met, United Way spokesperson Jackie Harris said.
The 2013 Helping Hand Award was presented to Brian Miller, a three-term member of the United Way board of directors who has held numerous leadership positions.
The Rowan County United Way also honored businesses and agencies for their support.
Fidelity Bank received the Most Improved award for a 318 percent in employee giving.
Southern Power Co., of Salisbury, was presented the Best New Campaign award for raising a total of $14,775 among 28 employees, as well as proceeds from a golf tournament.
The city of Salisbury received the award for Most Employee Spirit, based on participation in the agency’s Day of Caring and other events to support the United Way.
The Campaign Chairman’s Achievement Award went to Novant Rowan Medical Center for having a 44 percent increase in employee giving, plus personal involvement by hospital President Dari Caldwell.
The award for Best Overall Campaign by a company with fewer than 100 employees was Bank of North Carolina.
F&M Bank received the award for Best Overall Campaign by a company with 100 or more employees.
Hitachi Metals received the Campaign Award for Excellence for a company with fewer than 100 employees.
Freightliner was honored with the Campaign Award for Excellence for a company with 100 or more employees.
Members unanimously approved the nominating committee’s slate of board members and officers.
Penny Greer-Link was elected board chair.
New board members for the class of 2014-16 are Gary Blabon, Greg Dunn, Linn Evans, Steve Fisher, Denise Hallett, Leslie Heidrick and Lynn Moody.
James Randolph was elected to the board for the class of 2014-15.
In addition to Williams, incoming officers include:
• Steve Fisher, vice president, planning
• Mike McCurry, vice president, allocations
• Michelle Patterson, vice president, public relations
• James Randolph, vice president, agency relations
• Brian Miller, secretary-treasurer
• Greg Dunn, campaign chairman