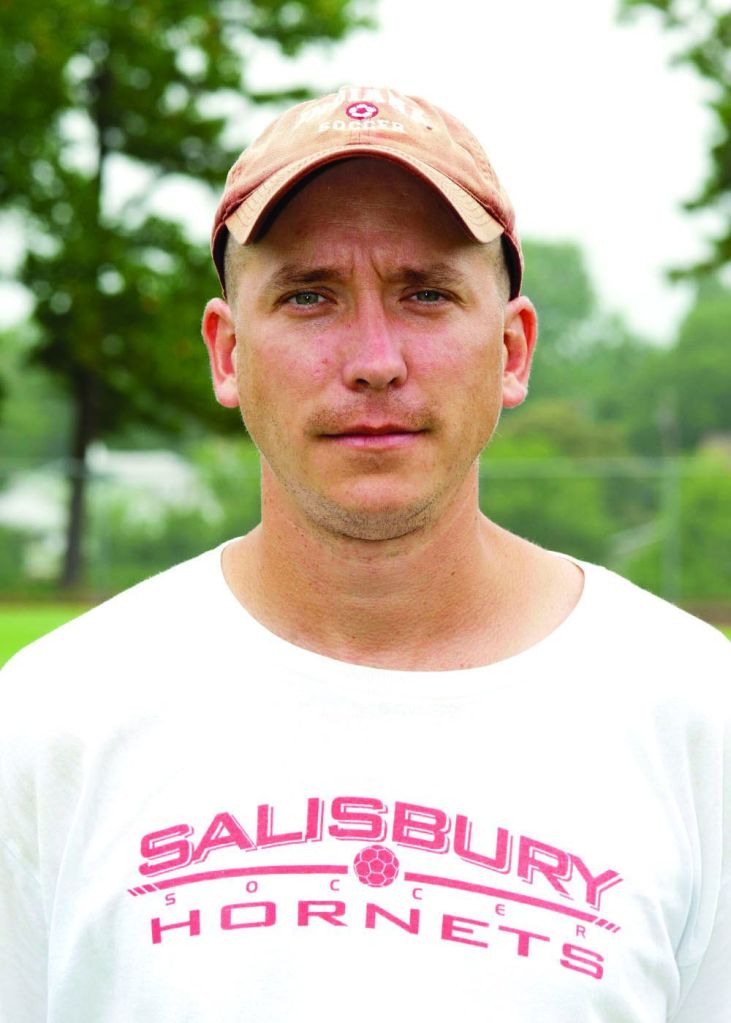 Salisbury snatched victory from the jaws of defeat in a wild 5-4 CCC overtime win on Wednesday against East Davidson.
East Davidson defeated Salisbury two of three times last season and beat out the Hornets for the CCC’s No. 2 seed behind Central Davidson, which has moved up to the 3A ranks this year.
Salisbury played very well in the first half, with Kate Grant opening the scoring on an assist from Ceci Cardelle.
The Hornets (5-1, 1-0 CCC) took a 2-0 lead 12 minutes later when Cardelle found Emma Labovitz at the top of the box. Labovitz’s shot hit the underside of the crossbar and the keeper’s fingers at the same time and ricocheted in at a backward angle.
The second half was a different story.
“We were dreadful in the second half, lost our gameplan and paid for it,” SHS coach Matt Parrish said.
SHS came out flat and conceded a goal 31 seconds into the second half to make it 2-1. Nine minutes later, ED leveled the match at 2-2 as the duo of Taylor McPhatter and Madison Hallman asserted themselves.
Salisbury regained the lead midway through the second half as substitute Adna Music found Cardelle for a goal.
East Davidson scored again with 13 minutes left, and the Hornets surrendered the lead for the first time with just over seven minutes left.
“To their credit, the girls fought through the adversity and recollected their wits,” Parrish said.
Grant knotted the match at 4-all with just over three minutes left.
The overtime period was a sequel to the first half as Salisbury took the lead on a goal from freshman Katie Bullock halfway through the first session on an assist from freshman Nellie Brown.
The remainder of the overtime session was more of the same as Salisbury surrendered only one shot on goal in the combined 20 minutes.
“I was proud of our resiliency, tenacity, and thoroughness,” Parrish said.
“The talk between the regular and overtime periods was the first time some of the girls have seen my crazier side,” Parrish said. “Again to their credit, they didn’t come out flat, responded to criticism, and regained the gameplan. It was a big win for us going into conference against our first 2A team of the season.
SHS got outstanding overtime efforts from Mary Seifert, Susannah Dixon and Ashlyn Heidt.
“It was a perfect mix of the freshman babies growing up a bit in a meaningful game and the senior leaders fulfilling their respective positions,” Parrish said.
SHS plays traditionally strong Trinity tonight at home.
• Carson stayed undefeated with a 4-1 SPC win against Northwest Cabarrus on Wednesday.
Scoring goals for the Cougars (6-0, 5-0) were Sarah Safrit, Cierra Josey, Katie Barringer and Cassie Howard.
Freshman Mia Trexler keyed the Carson defense.
Carson won 6-3 against Concord in SPC tennis played on Wednesday.
Marshall Wood, Graham Purcell, Casey Lucas and Matthew Martin won in singles for the Cougars.
Wood-Lucas and Purcell-Grayson Haff won in doubles.
• Salisbury got singles wins from Spencer Storey, Abraham Post, Chris Derrick, David Derrick and Hunter Carlton in an 8-1 CCC win against East Davidson on Wednesday.
Clint Comadoll-Post, Storey-Carlton and the Derricks won the doubles matches.
Salisbury is 9-0 and takes on Thomasville today at 4:30 p.m.
• East Rowan won 9-0 against West Rowan on Wednesday to stay unbeaten in the SPC.
Ike Emerson, Robert Gray, Jeremy Price, Evan Rogers, Addison Fry and Nikolas Pillsbury won in singles for the Mustangs (6-1, 4-0).
Emerson-Gray, Rogers-Price and Fry-Pillsbury racked up doubles wins.
East is in action again today at home at 4 p.m. against Concord.

West Rowan won 12-2 against Central Cabarrus in SPC action on Wednesday.
Michael Ball drove in six runs and Noah Teeter knocked in four for the Falcons (5-2 SPC).
Ball and Harrison Baucom had two hits each.
Omar Bautista (3-2) got the job done on the bump. He struck out 10.
• North Rowan’s baseball team opened CCC play with an 11-3 win at Lexington.
North pulled away late, with two runs in the sixth and four in the seventh.
Noah Gonzalez pitched four innings for the win and struck out nine.
Chance Mazza went 4-for-5 with two doubles and four RBIs. Gonzalez went 3-for-4 with two doubles and two RBIs.
• Kameron Sherrill, Trace Hagler and Christian Griffin had three RBIs each in a 21-0 win against West Charlotte on Wednesday.
Josh Endicott had three hits and was the winning pitcher for the Wonders (6-2, 4-1). He struck out five.
The teams play again tonight in Kannapolis.
• West Davidson won 8-3 against South Davidson on Wednesday.
Tyler Willard pitched five innings for the win and struck out six.
Chandler Simerson knocked in three runs for the Green Dragons (4-4).

Salisbury-East Davidson baseball and softball were postponed on Wednesday,
Baseball was rescheduled for this afternoon.
• The Northwest Cabarrus-East Rowan baseball game at Staton Field that was scheduled for Friday has been moved up to tonight.
West Rowan-Central Cabarrus baseball also has been moved up to tonight and will be played in Mount Ulla.
Carson-South Rowan baseball was moved up to tonight and will be played at South.
South Rowan won 8-2 against Northwest Cabarrus in SPC action to split the season series.
South overcame the loss of pitcher Logan Lowery, who was struck in the face by a line drive.
Lowery suffered some small fractures but is expected to return this season.
Samantha Kennerly was the winning pitcher.
Lowery had a run–scoring triple before she was hurt.
Abby Fields had three hits for the Raiders, while Caitlin Waters knocked in three runs. South won’t play again until Tuesday.
• Hickory Ridge scored in the seventh and beat West Rowan 6-5 in SPC action on Wednesday.
Kristine South had two hits for the Falcons.
Leah McCoy struck out four and pitched into the seventh inning.
• East Rowan won 4-0 against Central Davidson in a non-conference game.
• Carson lost to Cox Mill 11-8 in SPC action on Wednesday.
Morgan Peninger had two doubles and drove in four runs for the Cougars.
Kaycee Kennedy had three hits. Mariah Morgan had two hits and two RBIs, and Michaela White had two hits. Kayln Ellenburg and Madison Barnhardt had RBIs.
Kinsley Bean, Jana Bradshaw and Ellenburg had hits for the Cougars, who had a big lead most of the game.
Centralina Crossover West AAU Basketball has a few spots left for high school girls, junior varsity and varsity boys, 4th grade girls, and 6th, 7th and 8th-grade boys travel teams. Personal training sessions can be set up as well. Call 704 433 2197 or email coinc@bellsouth.net for information.
Salisbury Parks and Recreation is accepting registrations for youth soccer and youth baseball leagues.
Soccer is coed and is for ages 4-13. The cost is $20.
Baseball is coed for ages 4-9 and is free.
Register at Hall Gym.
Call 704-638-5289 for information.
The Kannapolis Intimidators open the season at home against Greenville on Thursday, April 3, at 7:05 p.m.
The Intimidators will again offer Senior Club memberships.
The Senior Club, now in its seventh season, provides fans 55 and older several benefits, including complimentary tickets to all Tuesday home games (nine games in 2014), for an annual membership fee of only $5.
Call 704-932-3267.
Catawba lost to Converse 7-5 in women’s lacrosse on Wednesday in Spartanburg, S.C.
Ebony Mills led the Indians (4-6) with two goals.
Southeast’s boys won 7-2 against Erwin.
Winners for the Patriots were Hunter Smith, Jailen Williams, James Ruiz, Alex Mercado and Alex Taylor.
Smith-Williams and Ruiz-Mercado won in doubles.
In the eGolf Tour’s Cowans Ford Open in Stanley, N.C., Frank Adams III shot a first-round 70 on Wednesday and is three shots off the pace. Johnny Kyger shot 71. Will Collins shot 72.
The Salisbury Police Athletic League is holding registration for the fall season on Saturday, March 29, from 11-2 at Hall Gym.
Players, coaches and cheerleaders are needed.
Contact Brian Miller at 704-754-1863 or George Miller at 704-223-0179.