Republican US Senate candidates speak out at Tea Party forum 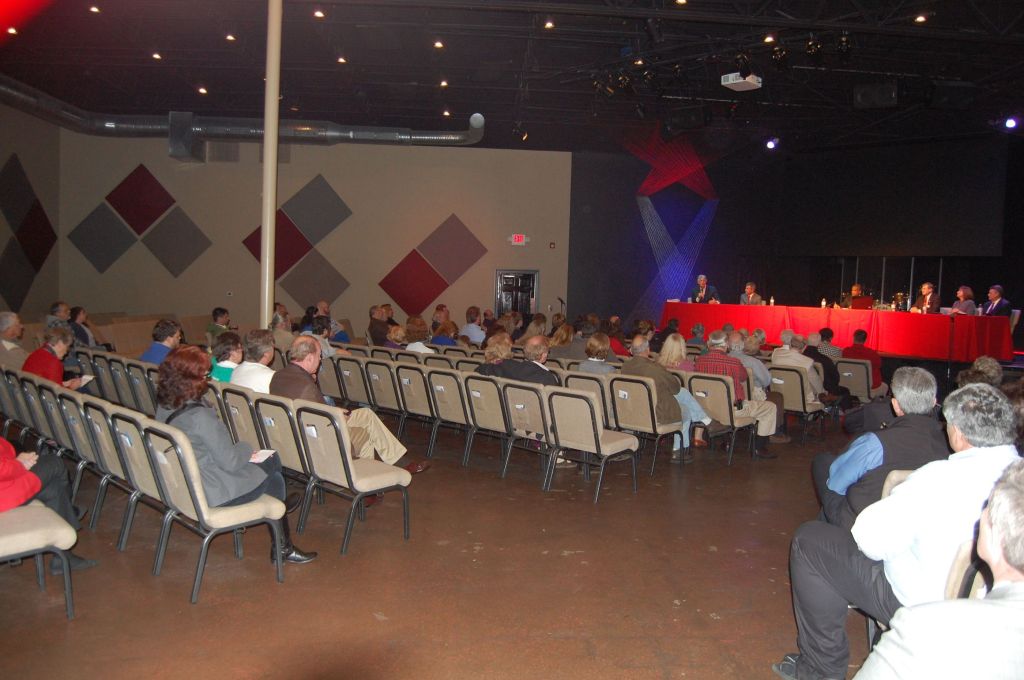 Five of the eight Republican candidates running in the primary to get a shot at U.S. Sen. Kay Hagan’s seat in November gathered Tuesday for a forum sponsored by the Rowan County Tea Party Patriots.
The event kicked off at 7 p.m. at High Rock Church West and was moderated by ex-anchor Vince Coakley, a Republican candidate in the 12th Congressional District race.
The candidates in attendance were Jim Snyder, Mark Harris, Heather Grant, Greg Brannon and Ted Alexander.
Coakley hit the candidates with a diverse series of questions, ranging from those concerning repealing Obamacare to limiting the reach of federal government to whether Republicans should abandon social issues to save the party this upcoming election.
“The problem with Obamacare is that it is unconstitutional. In Article 1, Section 8, it’s not there,” Brannon said. “It does not do what it says it does. It’s not affordable and does not have health care.”
An OB-GYN, Brannon said he has dealt with health care for 26 years and he is not bothered as a physician by Obamacare so much as a citizen.
The best thing in the world for any business is free markets, Brannon said.
“If you allow the free market to work constitutionally – the commerce clause correctly – have competition occur, that’s the answer,” Brannon said. “The patient must decide what kind of health care they want, deserve or decide. It is not controlled by a centralized top-down.”
Alexander said his top issue is the creation of jobs and getting the economy going again.
Obamacare is a job-killer and hurting many people, Alexander said.
“I think we have way too many regulations in terms of our federal government that is regulating every aspect of our lives,” Alexander said. “Any entrepreneur wanting to go into business is going to have a hard time doing that because of the regulations.”
The federal government is spending “way too much” while taking in too much, Alexander said, and the tax system needs to be reformed so it is more fair and government allows people to keep the “fruits of their labor.”
For Grant, government needs to start looking at “America first.”
“I know that sounds selfish, but the reason we are here today and we have the deficits and the problems we have is because we have stopped looking to taking care of our own and are attempting to be nice, play nice and take care of others while we don’t care what happens to our legal citizens here in America,” Grant said.
Government needs to stop the regulations that keep corporations from wanting to locate to the country and bring back their money from foreign banks, Grant said.
People who are unemployed no longer want to start up their own business, Grant said, because it “is almost impossible” to get a start-up loan.
“These are things that we have got to change, otherwise, we will not be the America that we even know today,” Grant said. “It would be horrible to see us go the way of other countries like Greece.”
Harris said he wants to be a voice bringing an end to the lawlessness that has overtaken society.
Convinced the lawlessness starts “at the top and is moving down,” Harris said it is a problem when the president takes office and determines which laws he is going to execute and which laws he will not.
“I believe that we need men and women of strength and courage who are going to be willing to stand with a backbone and call into account this administration and its leaders who are determined to continue to operate outside the framework of the United States Constitution,” Harris said. “It would send a great signal if we would call up some of these federal judges for impeachment from the bench who continue to refuse to understand their role is not to legislate from the bench.”
The system is not broken, Harris said, but rather at fault are the leaders who voters have sent to Washington, D.C., and who have misled citizens and taken the country down the wrong path.
“It is a leadership crisis that has brought on the constitutional crisis, and it comes back to you and me being willing to get over our apathy and being willing to get involved in the process and step up to bring new leadership,” Harris said.
The central issue of the 21st century for conservatives and Republicans, Snyder said, is life.
“I am sick to my stomach every time I hear that ‘this is my body and I can do with it as I shall,’” Snyder said. “It is time for conservatives in Washington, Raleigh and all over this country to (come together and) require that Roe v. Wade must end, and it must end soon.”