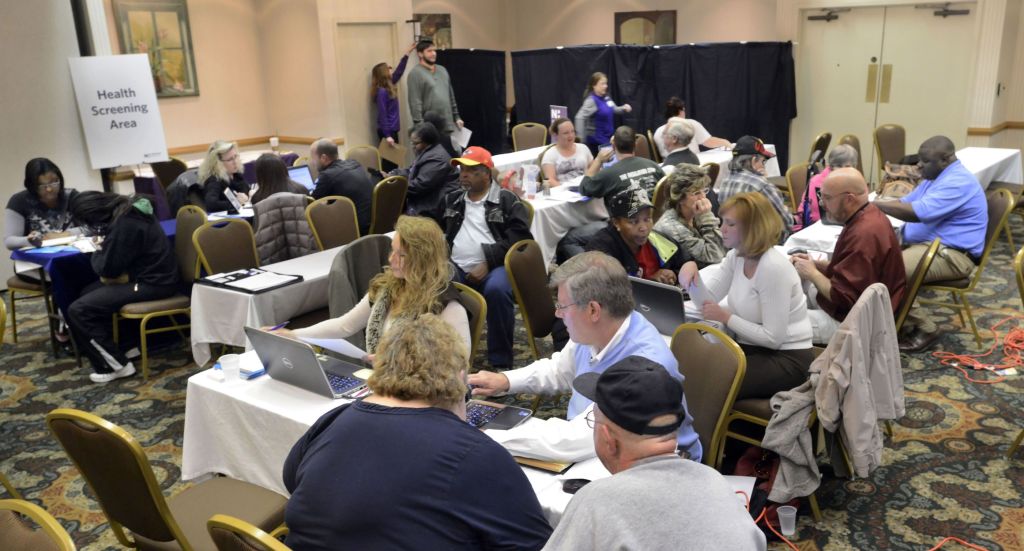 Chalk it up to human nature, but many folks are waiting until the last minute to sign up for health insurance through the Affordable Care Act marketplace. The deadline is Monday.

On Tuesday from 3 to 7 p.m., Novant Health Rowan Medical Center offered a sign-up session at the Hotel Salisbury with local insurance representatives. The agents were kept busy throughout the four-hour period as some 67 people took advantage of this opportunity.

According to Falon Nye, Novant’s marketing manager, attendees first met with Novant financial counselors at tables set up in the hotel lobby to determine their eligibility. To qualify, applicants must have income that falls between 48 percent to 100 percent of the poverty level, and have children at home.

Because North Carolina did not extend Medicaid benefits, there’s a gap which includes people who are not disabled, who do not have children at home and who do not make 48 percent of the poverty level.

The pre-screening aspect of the sign-ups was meant to point people in the right direction. Vicki Peeler of the Community Care Clinic said that two people she met with qualified for assistance. Jennifer Jacobs, also of the clinic, noted that out of some nine weeks’ worth of weekly appointments conducted by Dianna Wald, a certified navigator for Rowan and Davidson counties, only 16 people at the clinic enrolled in ACA.

Krista Woolly, the clinic’s executive director, noted that while the numbers were low, they shouldn’t be compared with sign-ups from the general public.

“Most of the people we work with are pretty low-income,” Woolly noted.

She did say she felt as if the overall number of her patients who signed up for insurance was higher because many had placed successful calls to the marketplace’s 800-number.

In the beginning of the process last fall, the Web site went down because so many people were trying to sign up. Woolly said that Wald has again found that to happening in the afternoons.

Ed Snow, owner of Snow Benefits Group, gave an overview of the Affordable Care Act and answered questions before attendees were directed to individual insurance agents. Four of Snow’s agents were working with him. In retrospect, he wished he would not have closed his office.

“When we came over today,” he said, “our phone was ringing off the hook.”

Most of the customers his agents have worked with, he said, have not had insurance. Some customers, he said, checked into whether they could get better insurance for less money, but those were the exception to rule.

Excluding qualifying events such as moving to a new state, changing jobs, getting married or having a baby, the next open enrollment period is not until November.

One woman who came with her husband to yesterday’s session said that they were totally confused about their insurance options on a low-income budget.

Yes, she admitted they had put it off. “We were just wishing it would all go away.”

Lenora Angel, who has been self-employed since 1999 and has not had insurance since then, went through the screening process and needs to bring back tax information to an insurance agent.

“I know I needed insurance, but I’ve been procrastinating,” she said. Luckily, she said, her health has been good.

James Campbell was disappointed with what he found out.

“I’m unemployed and I don’t qualify for a subsidy,” he said. “As soon as I do become employed, I can reapply and only pay a 1 percent penalty.”

Campbell said that he lost a manufacturing job in March 2013, and that his benefits were now exhausted. Still, he remained optimistic.

“I’m networking with people in the Charlotte area,” he said. “I’m hoping something opens up there.”

He wished a blessed day to everyone he met.