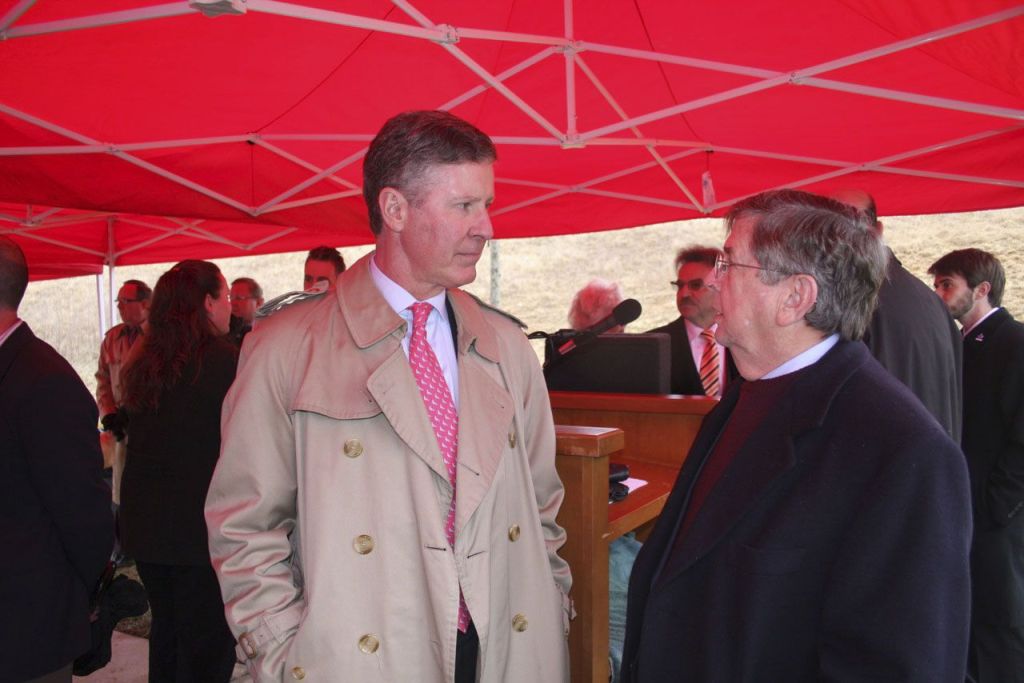 KANNAPOLIS — A cold, rainy morning couldn’t dampen Mayor Darrell Hinnant’s enthusiasm as he announced the construction of a $17 million spec building in the Afton Ridge Business Park.
The 360,000-square-foot building should be complete by December. It’s being built through a partnership between the city and Childress Klein Properties.
“All that they have asked us is to be a willing partner,” Hinnant said Tuesday morning. “We have made that commitment.”
Hinnant said that the building could bring up to 300 jobs to the area, and is an example of the city, the developer and the Economic Development Commission working together.
“This is a great day for Kannapolis,” he said.
Patrick Coughlin, the EDC’s president and CEO, said that in one day last week, his group had received inquiries about four separate projects.
“We don’t have enough inventory of existing buildings,” he said.
For its part, Kannapolis City Council is offering a financial participation package which includes a three-year tax rebate at 85 percent of the property taxes due to the city once the building is complete. The city will also provide Childress Klein with a $500,000 loan with no payments due to the city until the building is at least 50 percent leased or until it is sold. At that point, $250,000 of the loan will convert to a grant with no required payback. The remainder will be paid to the city.
Additional highlights of the building include:
• Office area, built to suit
• Immediate access to I-85 at Kannapolis Parkway
• 30-foot clear building height
• Design that saves energy and water
• 78 dock doors
• Up to 237 automobile and 100-plus trailer parking spaces
Coughlin said that industry and manufacturing opportunities are “dramatically increasing” in the country and in the region. Businesses need to quickly locate and expand — thus the attraction of a spec building.
Landon Wyatt, a partner with Childress Klein, characterizes Kannapolis as “an easy place to do business.”
The company bought the land some 10 years ago, he said. “We’ve been invested here for a long time.”
However, he said, the years 2007 to 2012 don’t count, eliciting laughter from the small crowd of City Council members, city staff, other officials and media gathered under three red tents.
The building, he said, is the largest spec building built in the region at the present time.
“That’s the level of confidence we have,” Wyatt said.
He said he hoped it would be the first of many such buildings constructed in the business park.
After the ceremonial groundbreaking with a number of city and other officials, City Manager Mike Legg said that while the building could have multiple tenants, it would probably be just one.
“The momentum is building,” he added. “The location is just perfect, and it’s close to the Triad, too. Most facilities here are here because of the equal distance between the two major urban centers.”
The hope, Legg said, is to announce a tenant by the end of the year.
“I don’t think it’ll be a difficult thing,” he said.
Wyatt said that construction on the building would start in the next three weeks. He said he hoped to have a tenant by 18 months after completion.
“There’s not a panic if not,” he said. “These things take time.”
Freelance writer Susan Shinn lives in Salisbury.