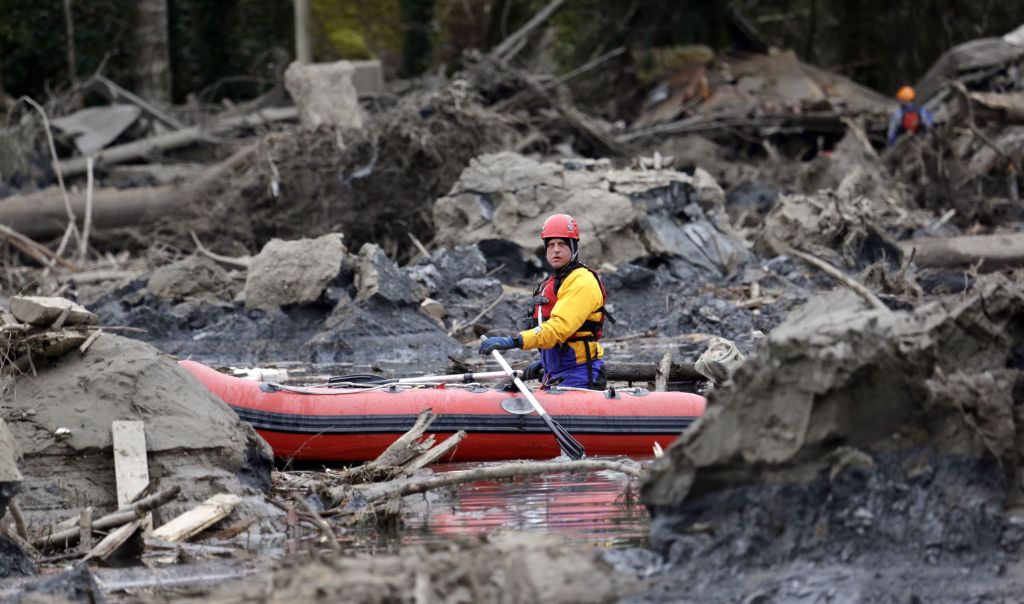 ARLINGTON, Wash. (AP) — A scientist working for the government had warned 15 years ago about the potential for a catastrophic landslide in the fishing village where the collapse of a rain-soaked hillside over the weekend killed at least 14 people and left scores missing.
As rescue workers slogged through the muck and rain in search of victims Tuesday, word of the 1999 report raised questions about why residents were allowed to build homes on the hill and whether officials had taken proper precautions.
“I knew it would fail catastrophically in a large magnitude event,” though not when it would happen, said Daniel Miller, a geomorphologist who was hired by the U.S. Army Corps of Engineers to do the study. “I was not surprised.”
Patricia Graesser, a spokeswoman for the Army Corps in Seattle, said it appears that the report was intended not as a risk assessment, but as a feasibility study for ecosystem restoration.
Asked whether the agency should have done anything with the information, she said: “We don’t have jurisdiction to do anything. We don’t do zoning. That’s a local responsibility.”
Snohomish County officials and authorities in the devastated village of Oso said that they were not aware of the study but that residents and town officials knew the risks of living in the area.
In fact, the area has long been known as the “Hazel Landslide” because of landslides over the past half-century. The last severe one before Saturday’s disaster was in 2006.
“A slide of this magnitude is very difficult to predict,” county Public Works Director Steve Thomsen told The Seattle Times, which first reported on Miller’s analysis. “There was no indication, no indication at all.”
No landslide warnings for the area were issued before the disaster, which came after weeks of heavy rain. The rushing wall of quicksand-like mud, trees and other debris flattened about two dozen homes and critically injured several people.
“One of the things this tragedy should teach us is the need to get better information about geologic hazards out to the general public,” said David Montgomery, a geomorphologist with the University of Washington in Seattle. “Where are the potentially unstable slopes? How big a risk do they pose? And what should be done to let homeowners know about that?”
Meanwhile, searchers continued to pick through the debris, warning they were likely to find more bodies. Authorities were working off a list of 176 people unaccounted for, though some names were believed to be duplicates.
The threat of flash floods or another landslide loomed over the rescuers.
Near the southern perimeter of the slide, volunteers from a logging crew gathered to help move debris with chainsaws, excavators and other heavy equipment.
Gene Karger said he could see six orange flags in the debris field, marking bodies they would be pulling out. Karger, a logger most of his life, said it was the first time he was involved in this kind of rescue work.
“You see parts of their bodies sticking out of the mud. It’s real hard. It’s that bad,” Karger said. “There are people out there we know.”
In his report, Miller said that the soil on the steep slope lacked any binding agent that would make it more secure, and that the underlying layers of silt and sand could give way in a “large catastrophic failure.”
But he also cautioned: “I currently have no basis for estimating the probable rate or timing of future landslide activity.”
In an interview Tuesday, Miller noted there are hundreds of similar landslides in Washington state each year, and this particular river valley has had three very large slides in the last three decades.
Predicting landslides is difficult, so much so that damage from them is excluded from private insurance policies, according to a study published by the U.S. Geological Survey in 2012. One challenge is estimating the probability of a slide in any particular place.
One of the authors of the USGS report, Jonathan Godt, a research scientist with the agency in Colorado, said landslides don’t get that much attention because they often happen in places where they don’t hit anything.
But with Americans building homes deeper into the wilderness, he said, “there are more people in the way.”