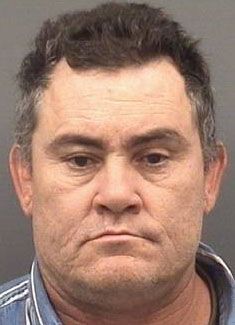 A convicted felon with a lengthy criminal history has been identified as the suspect in a violent home invasion.
Last Saturday, at 6 a.m., a 62-year-old woman was on her porch at her home near Old Beatty Ford Road, Rockwell. A vehicle driven by a white male pulled up and the man identified herself as a bondsman. He told the woman he wanted to search her house for a person. The woman refused and the man identified himself as a federal agent. The woman told him she was going to call the Sheriff’s Office.
The man then pushed the woman to the ground and stomped her head with his foot and took her cellular phone before he left in a white car. Sheriff’s CID began investigating the case and identified 49-year-old Jimmy Ray Blackwell as the suspect.
Blackwell has a lengthy criminal history dating back to 1981. Blackwell was recently released from prison on charges of home invasion-style robberies and kidnappings that involved elderly victims in 2007 in Rowan County. Blackwell pled guilty to reduced charges in 2011 and received an active prison sentence. Blackwell is now out on bond for a charge of common law robbery in Davidson County.
Blackwell is now in the Rowan County Jail under a $25,000 secured bond.
Look for further updates in Wednesday’s Post.

Symphony presentation of Carmina Burana is a spectacle to…