Bill Stanback recalls his time aboard USS Gandy in WWII 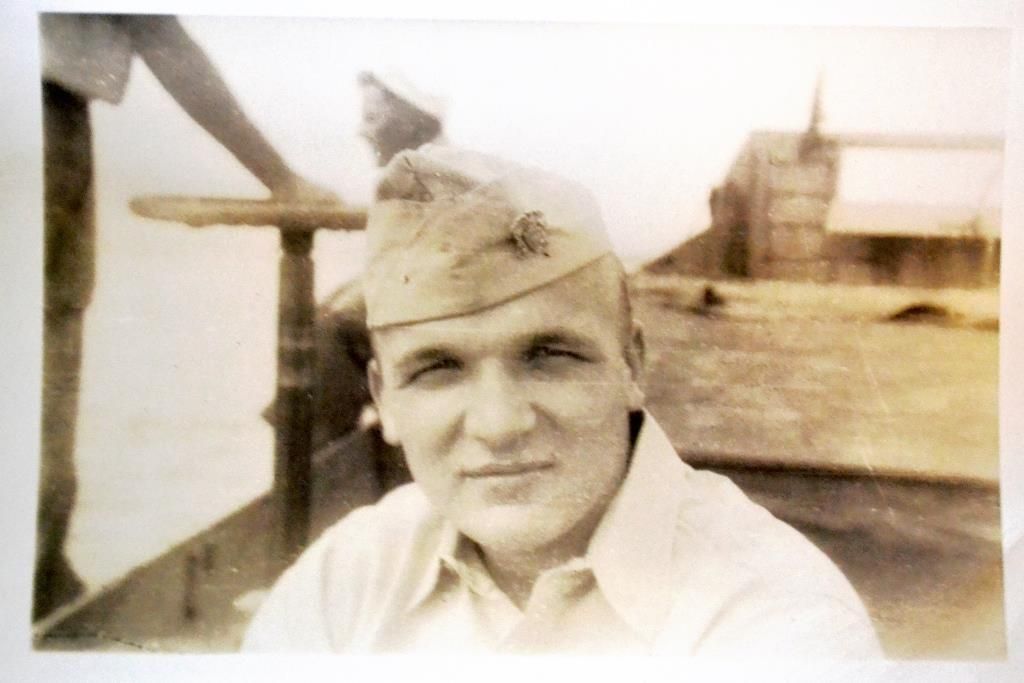 I’ve been fascinated with the personal stories of World War II veterans ever since my father told me his own war stories when I was a child. Now that World War II veterans are reaching their 80s and 90s, fewer and fewer of them are still around to share their experiences with me. I consider interviewing these men to be a privilege and an honor; it’s like looking through a window into history — a window that may not be there for us much longer.

So I was excited when I was at the Salisbury Kiwanis Pancake Supper recently and was introduced to Salisbury native Bill Stanback, who had just spent most of the morning serving coffee. A shade over 90 years old, Bill may be better known locally as the son of the founder of Stanback Headache Powders, Thomas Stanback. Balding, white-haired with a ready smile and a kind word for everyone he meets, Bill looks like you would imagine a favorite grandfather to look, full of the kinds of stories that every grandchild is eager to hear. I couldn’t resist; I asked him whether he had served in World War II.

I’ve come to recognize that look. It’s the misty look that all veterans get when they start to tell you about the most important events in their lives, the experiences that have defined who they are. Intense memories that have been seared into a man’s consciousness so strongly that 60 or 70 years later he can recall them as clearly as if they happened yesterday, whether he wants to or not.

“We rammed a U-Boat just off the coast of New York,” he finally said matter-of-factly, as if the event were minor and had taken place just that quickly. “We were under attack, and my captain’s voice came over the loudspeaker telling us to get ready for a collision.”

It was April of 1944, just before D-Day in June of that year. The Navy destroyer escort DE-764, better known as the USS Gandy, was assigned as a part of Escort Division 22 to accompany Convoy C-21, a convoy of 28 merchant ships accompanied by six destroyer escorts leaving New York bound for Northern Ireland on April 15. Captained by the seasoned Navy Lt. Commander William A. Sessions, the newly commissioned USS Gandy took the place of another ship, the USS Leopold, which had been sunk by a German submarine the previous month. The Gandy was the only Navy ship in the flotilla; all five of the other destroyer escorts in Escort Division 22 were Coast Guard ships. Two of these ships — the USS Joyce, the flagship of the Escort Division and the USS Peterson — were positioned near the Gandy as the convoy left New York.

Bill had been fascinated with boats from childhood, so joining the Navy was an easy decision for him. After his sonar specialist training in Florida he was assigned to the destroyer escort USS Gandy, still under construction at the time. Barely 21 years old, Ensign Bill Stanback’s principal duty was coordinating depth charge attacks against enemy submarines; his battle-station was on the “flying bridge” where he could relay the sonar findings directly to the captain. The flying bridge was located high above the main deck towards the bow of the ship, affording Bill and the others positioned there an unobstructed view of all areas surrounding the ship, and a front-row seat to any sea action the Gandy would encounter.

Although German U-boats were known to be patrolling the northern Atlantic at the time, the destroyer escorts accompanying convoys were specially equipped with the latest technology to hunt and kill submarines, making any attacks very risky for the Germans. Even so, the merchant ships in these convoys made tempting targets because they carried food, supplies, weapons and munitions crucial to the Allied war effort being assembled in Great Britain.

The convoy left New York’s harbor just after midnight under the protective cover of night. Just before 8 a.m. the next morning and just 70 miles south of Nantucket, disaster struck. One of the ships in the convoy was a 515-foot-long behemoth of a tanker named the SS Pan-Pennsylvania. The Pan Pennsylvania was one of the largest fuel tankers in the world at the time, and she was carrying 140,000 barrels of desperately needed 80-octane aviation fuel. Poor weather conditions had caused the big ship to lag behind the destroyer escorts, and the mistake put her squarely in the crosshairs of an enemy U-boat. The first moment anyone knew anything was wrong was when a torpedo hit the tanker on her port side, causing a huge explosion heard clearly by the men aboard the nearby USS Gandy.

“I had just finished my 4 to 8 a.m. watch and was sitting down to eat breakfast,” explains Stanback. “The explosion shook our ship. We went to general quarters and it got exciting real quickly.”

The tanker caught fire and began sinking almost immediately. When the fire reached the engine room of the SS Pan-Pennsylvania the captain ordered the crew to abandon ship. The Joyce and the Peterson circled nearby to pick up the tanker’s survivors while the Gandy patrolled the area to try to find the U-boat that had attacked the tanker.

The German U-boat’s young captain, Kapitänleutnant Klaus Hänert, had only been given command of U-550 the previous July. In February of 1944, after six months of training, the sub had been assigned to attack Allied convoys using the shipping lanes extending from the Port of New York. In order to avoid detection by the destroyer escorts, Hänert’s plan was to stay submerged near the sinking tanker as long as he could and then attempt to slip unnoticed away from the convoy. He had hoped that the other convoy ships would abandon the stricken tanker to keep up with the convoy, but when they circled back he felt he had no choice but to attempt to torpedo them as well. The torpedoes aimed at the Joyce and the Gandy missed their intended targets but the telltale wakes they left were observed by sharp-eyed sailors aboard the Gandy, and they pointed straight back to the sub concealed beneath the tanker.

Using her sophisticated sonar gear, the Joyce managed to find and bracket the German sub with 13 depth charges so accurately aimed that one actually bounced off of the sub’s hull before exploding. The severely damaged sub was forced to surface in the Joyce’s wake. Racing on the heels of the Joyce, the Gandy suddenly sighted the sub surfacing just 600 yards in front of it. German sailors spilled from a hatch on the deck and opened fire on the Gandy and the nearby USS Peterson with a battery of deck guns; sailors aboard both ships quickly returned fire.

Now under direct fire from the sub, Commander Sessions issued the order “Right full rudder, come to 320 degrees, open fire, and stand by to ram!” It was a risky move, for it would place the Gandy squarely between the Peterson and the stricken U-boat. Destroyer escorts were built with special “ramming plates” constructed for just such a situation; aiming for the still-moving sub’s conning tower, the Gandy managed to ram her diagonally about 30 feet from the stern, inflicting major damage but not putting her completely out of action. The German sailors on the sub’s deck kept firing their guns until they were cut down by withering point-blank fire from the Gandy and the Peterson. A few more bursts from the Gandy’s cannon and a shallow depth charge attack launched from the Peterson caused the remaining occupants of the sub to begin abandoning ship, and the firing ceased.

The men on the deck of the Gandy erupted in wild cheering. “You would have thought we had just won a football game!” says Stanback with a grin. The surrendering German sub captain, however, would not voluntarily give up his precious U-boat; a few minutes later there was another muffled explosion from the sub as scuttling charges blew, and U-550 sank, stern first, entombing more than 40 members of her crew in the depths of the Atlantic.

After-battle assessments showed that the damage to the Gandy was almost inconsequential; all repairs except those to a few damaged radio antennae were completed less than 10 hours later. After-battle reports show that the Gandy’s casualty list listed only four wounded and none killed. The Gandy continued on with the rest of the convoy and reached Lisahally, Ireland on April 26 without further incident.

“It was my first convoy and my first day in the war,” Stanback says, half-joking, “and I didn’t even get to eat breakfast!” Fortunately, the Gandy’s crew never had another direct encounter with the enemy for the remainder of the war. When the ship was decommissioned at Green Cove Springs, Fla., on June 17, 1946, Bill, now her executive officer, was one of only a handful of crew members who had served on her crew throughout her entire career in the service. The Gandy was later transferred to Italy under the Military Assistance Program, where she served under the name of Altair (F-591) until her retirement in 1971.

Some 20 German U-Boats are known to have been wrecked within 300 miles of the American coast. One of the last of these U-boat wrecks to be located, the wreck of U-550 was finally discovered on July 23, 2012, by a team of amateur divers in the deep water off of Nantucket. Ironically, they used advanced sonar — the same technology used by the destroyer escorts to hunt submarines in 1944 — to find the wreck.

After Bill returned to Salisbury in 1946 he used his G.I. Bill compensation to attend Harvard Business School and has been a Salisbury resident ever since, working in the family business and participating in community affairs. He has been a valued volunteer to local charities and a respected community leader, serving on the City Council and as mayor from 1973 to 1975.

Though Stanback and other World War II veterans like him rarely speak of what they went through back in the 1940s, many still bear the scars and reminders of their wartime experiences. Stanback is understandably proud of his military service to the country, but he hesitates when someone says he and others like him are America’s heroes. He says he feels that he “did no more than anyone else would do if they were in the same situation.” I asked him what he thought of Tom Brokaw’s characterization of his generation as “the Greatest Generation.” After a moment he replied, “If we were the greatest generation, it was only because we lived during a great time in our nation’s history.”

Even so, anyone who understands what was expected of the young men who manned American destroyer escorts during World War II would have to agree that they possessed a special brand of courage. And if anyone needs proof of the expert skills, selfless courage and dogged determination exhibited by the commanders and sailors of the USS Gandy, the USS Joyce and the USS Peterson, I would submit only this fact for their consideration: The SS Pan-Pennsylvania was the first — and the last — ship ever sunk by the German submarine U-550.