Miss NC US passionate about getting young people to vote 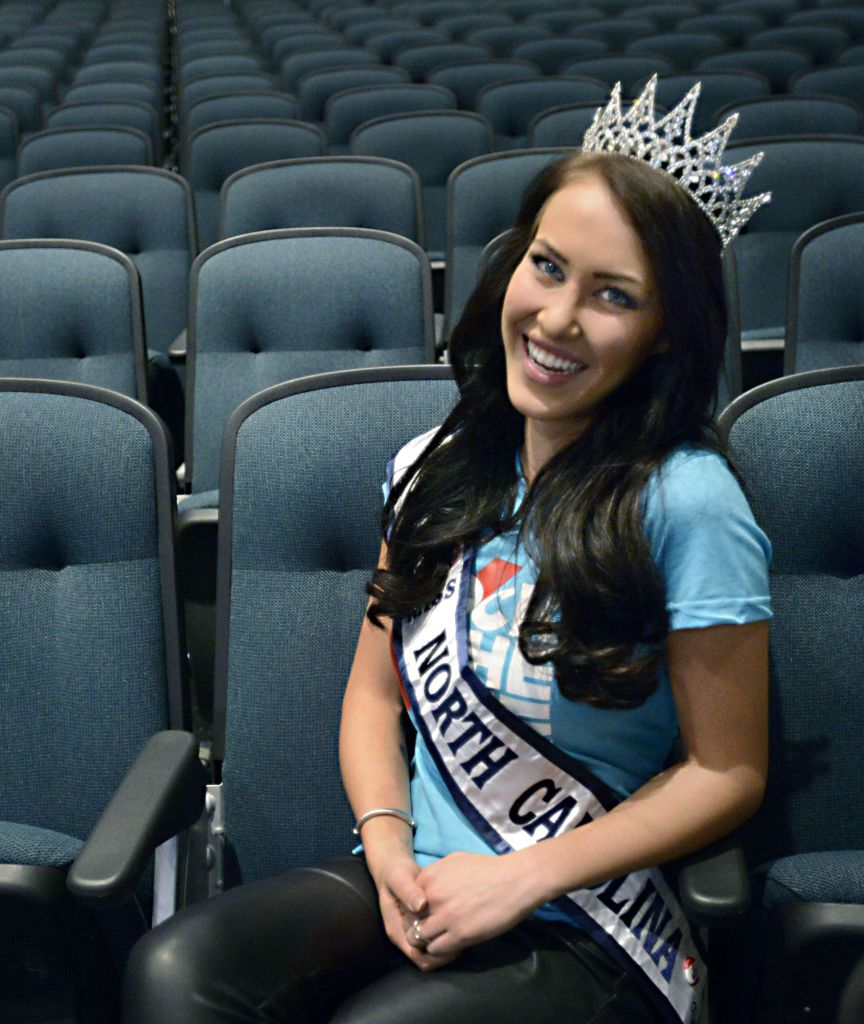 KANNAPOLIS — With her turquoise T-shirt, tight black leggings and boots with 5-inch heels, Elizabeth Safrit is not your typical beauty queen.

But she’s got the crown to prove it.

She’s also got the smarts. Elizabeth, 21, is a political science major at the University of South Carolina, graduating in May. She’s Miss North Carolina United States, and will compete this summer at the Miss United States pageant in Washington, D.C.

Her platform is voter registration — appropriate for a political science major. Elizabeth is focusing on voter registration for young people, and is working with Rock the Vote to accomplish this goal. She hopes to appear at high schools all over North Carolina, and kicked off her Rock the Vote initiative Friday at her alma mater, A.L. Brown High School.

“Any way we can encourage people to vote, I’m all for it,” he said. “Anything we can do to make sure young people vote is great.”

Rock the Vote, Elizabeth told the students, was founded in 1990 as a non-profit, non-partisan organization to encourage voter registration among young people. It uses music, pop culture and new technology — as well as young celebrities — to appeal to younger voters.

Elizabeth showed a video that noted that more people check facebook and watch the Super Bowl than exercise their right to vote.

“You can have power,” she said, “but only if you participate.”

Elizabeth then chose two students, sophomore Tyler Johnson and senior Rivers Lewis, to participate in a trivia quiz about national and state politics.

The young men knew the names of the president, the first president and the governor. They couldn’t come up with Hinnant’s name, however.

Hinnant was a good sport about it, but made an interesting point to the students.

“The city government is the closest government to you,” he said. “It’s rare we ever see anybody as young as you at council meetings, but it is your right to come.”

Hinnant won the election, he said, but only with 3,000 votes. Only 100 people age 25 and under voted for him, he added. “The only way to make a difference is to get out and vote. You have the power, if you’ll just use it.”

Elizabeth said she likes to encourage everyone she meets to vote. That includes her friends at school.

Elizabeth is the daughter of Wally and Lynne Scott Safrit. Her father serves as Kannapolis’ city attorney and her mother is president of the N.C. Research Campus, so Elizabeth has grown up in the spotlight.

And she’s loved it.

“They taught me how to voice my opinions,” she said. “They’re the best people I know. But there’s a lot of pressure. I like the pressure. It makes me want to work hard.”

She’s served as a page and already worked on one political campaign. She envisions a future of more of the same, perhaps serving as a political consultant, and mounting a campaign of her own down the road.

Elizabeth will be making school appearances on Fridays through the end of the school year. She’ll also be preparing for the national pageant competition July 1-6.

Elizabeth has only participated in the pageant circuit for the past three years.

“My very first pageant was Miss Rowan County,” she said. “I did it as a favor to family and friends. They needed one more girl. I got hooked.”

She was Miss Rowan County 2011 and Miss Archdale Trinity 2012. She was Miss Kannapolis USA 2013 and Miss Charlotte USA 2014 before switching to the Miss United States program.

Participating in scholarship pageants, she said, has covered her costs for books during school, and they paid for her brother’s books as well. Wil Safrit, 20, is a sophomore at Duke University.

Elizabeth received a scholarship to USC that she could not turn down, she said, but has applied to several schools in North Carolina for graduate school.

In the Miss United States pageant system, the interview counts for 50 percent of the competition, along with swimsuit and evening gown categories.

You have to be prepared for just about any question, Elizabeth said.

“People have this misconception about beauty pageants that you don’t have to be intelligent,” she said. “I like to prove that wrong.”

For more information about Rock the Vote, visit www.rockthevote.com.