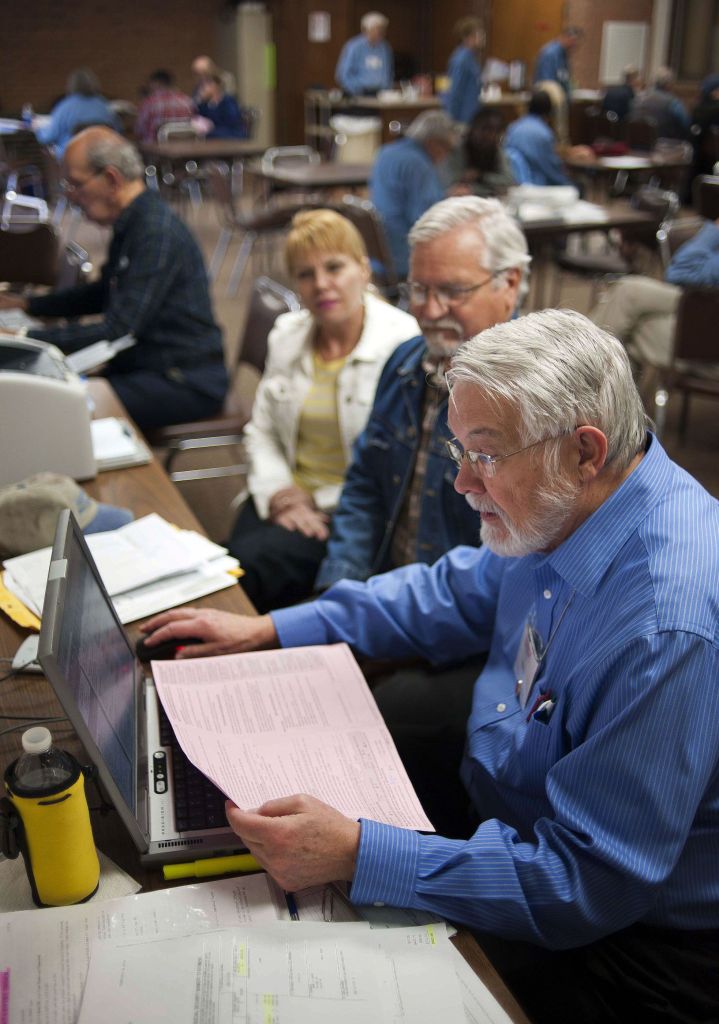 This time of year finds Bill Behrendt exactly where he’s been for the past 15 years — at Rufty-Holmes Senior Center for the AARP Foundation Tax-Aide Program.
Behrendt, a retired electrical engineer, serves as local coordinator for the popular program. Assistance takes place every Tuesday from 8:30 a.m. to 3:30 p.m. at the center, 1120 S. Martin Luther King Ave., until April 15 — which just happens to be on a Tuesday this year.
Perhaps one reason for its popularity is that the Tax-Aide Program is free.
“We take everybody,” Behrendt says, although they typically work with the senior population.
The program is advertised through word-of-mouth and announcements in the newspaper, Behrendt says. “We give clients ‘tell your friends’ cards.’ ”
Evidently, they do.
“We’ve been busy this year,” he says, “but we have a lot more volunteers this year, too.”
That way, he notes, they can help even more folks.
Behrendt’s cadre of volunteers numbers 30, and they can be seen around the large activity room sporting denim shirts embroidered with the AARP logo.
They’re not just retired engineers and accountants but come from a variety of backgrounds. They’re kind and friendly and eager to help.
They have quite an impressive array of snacks to keep them going throughout the mornings and afternoons, too. Sara Rice says she’s but one of many weekly snack providers.
Appointments are made throughout the day every half-hour. The last appointment occurs at 3:30 p.m., and the Tax Aide volunteers try to leave as close to 5 as they can, since that’s when the center closes.
Appointments can take anywhere from 15 minutes to an hour and a half, Behrendt says, so it sort of averages out through the day.
This past Tuesday was not as busy as usual. Behrendt blamed the icy weather that settled in for most of the day.
Tax Aide volunteers file returns via computer, perform a quality check, then other volunteers distribute envelopes that clients can bring back next year when they file their 2014 taxes.
The Tax-Aide program started in 1968. Today, it’s the nation’s largest free, volunteer-run tax assistance and preparation service.
This is Jerry Freeman’s first year as a volunteer. He just enjoys helping people, he says.
“I have a little expertise in this area,” says Freeman modestly. He retired a year ago after a long career in public accounting.
This is Bart Demaray’s sixth year as a volunteer. Like Behrendt, he’s a retired electrical engineer and classifies himself as a “bored retiree.” He’s one of the people who performs quality checks after a return is complete and answers questions that may arise during the process.
“I just enjoy it,” Demaray says. “I enjoy the folks.”
He comes and works each Tuesday. He says that the group’s goal is to file 100 returns a day, an ambitious one, he allows.
Phyllis Winecoff is one of the volunteers who puts everything in envelopes at the end of a session if a client owes money on their tax return.
“What we have to do is getting simpler every year,” she notes.
Years ago, Winecoff did her own taxes, and “thought nothing of it.”
Now, she brings them when she comes to volunteer, although she hasn’t brought them yet this year, she says.
“It gets me out,” Winecoff says of her volunteer work.
Like Demaray, Behrendt also serves as a troubleshooter during the sessions. On this day, he clusters around a keyboard with volunteers Vickie Turner and Mary Ann Frye.
A few minutes later, he stands up.
“The problem’s solved,” he says.
Appointments are still available for the AARP Foundation Tax-Aide Program at Rufty-Holmes Senior Center, which continues Tuesdays through April 15. Four more weekly sessions are slated. To schedule your free appointment, call Rufty-Holmes Senior Center at 704-216-7714.
Freelance writer Susan Shinn lives in Salisbury.

A year after amputation, Morgan working to encourage others…