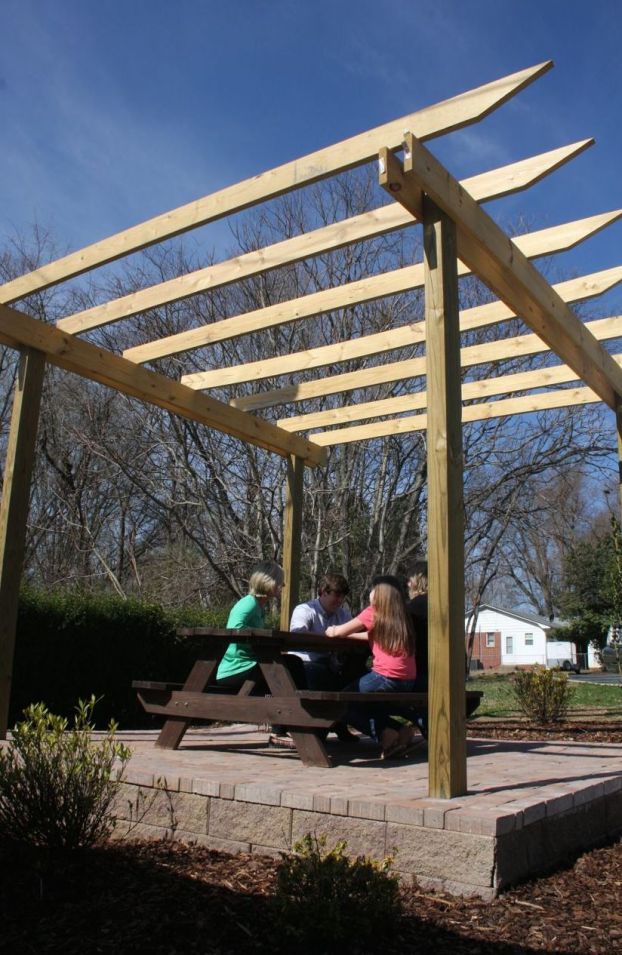 CHINA GROVE — This past weekend, Main Street Mission dedicated a new community garden area, the centerpiece of which is a pergola installed by Zane Oliphant.
Zane, 16, came up with the idea for his Eagle Scout project.
“I volunteer here at lot,” Zane said last Saturday, sitting at a picnic table under the pergola. “I felt like it needed something back here. It was boring. And the line on food distribution days can be long, and people needed somewhere to sit.”
Zane got the idea for a pergola from his mom, Hope, who’d been wanting one at their home. Zane asked David Wootten of Wootten’s Irrigation and Landscaping in Salisbury for his expertise.
Zane saw a pergola at Classic Covenant School, where he has football practice with the Cabarrus Stallions, a league for private school students. Zack is in 10th grade and a homeschooler. He plays linebacker and center for the league.
Zane went before the Boy Scout Board of Review to have his plan approved, then met with Anne Corriher, the mission’s executive director, to go over details.
One of those details, of course, was raising money for the project. Zane’s budget was $1,200, and he held a pancake breakfast at his church, First United Methodist in China Grove.
“We ended up raising it all,” he says with a grin.
A church member was kind enough to tell Zane she’d “round up” whatever he needed.
“Those were some good pancakes,” Anne says, smiling herself.
Anne was thrilled to work with Zane on the project.
“I thought, ‘Hallelujah! We’re getting something pretty back here!’ ” she says.
She’d recently added walk-in freezers in the back of the building and rounded off another part of the back for additional storage. She admits the “lumpy ground” wasn’t a very conducive gathering place.
No more.
A 12-foot by 12-foot platform, made of different-sized brick pavers, holds the picnic table and pergola. Underneath, Zane put in a retaining wall made of larger pavers to level out that lumpy ground. Wootten donated the pavers, and Godley’s Garden Shop gave Zane a break with the plants he purchased to landscape around the pergola and in between the recently paved sidewalks. Two newly planted wisteria vines will start climbing the pergola soon. Surrounding the area are kaleidoscope abelia, dwarf gardenias and skypencic holly.
Zane started planning his Eagle project in December, and executed it in February. Some 15 volunteers worked 20 hours on the project. The group included his dad, Steve, and his granddad, Steve Oliphant Sr.
Zane is a member of Troop 476 at Thyatira Presbyterian Church.
Anne thinks she’ll mulch the area beside the pergola to cut down on lawn maintenance.
“I’d love to have some blueberry bushes back here,” she says.
A plaque installed nearby calls the area “A Place of Grace.”
“It is the first thing I see when I come here in the mornings,” Anne says. “It just makes me smile every time I come in.”
Freelance writer Susan Shinn lives in Salisbury.

LINCOLNTON — Police have arrested a Lincolnton man and charged him with assault on a female after a woman said... read more