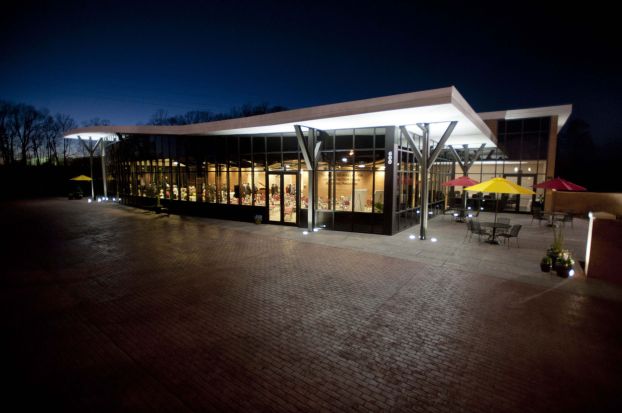 A place to break bread: Hood refectory named for Aymer

For no one can lay any foundation other than the one that has been laid; that foundation is Jesus Christ.
— 1 Corinthians 3:11

By Susan Shinn
For the Salisbury Post
What is a refectory?
Simply put, it’s a cafeteria. But it’s so much more than that.
“It is a place of community, a place of collaboration, a place of restoration and transformation,” said architect Karen Alexander, who designed the refectory at Hood Theological Seminary.
The Albert J.D. Aymer Center for Spiritual Growth and Ministerial Formation was dedicated Thursday evening at Hood. More than 100 community and city leaders, along with representatives of the seminary’s board of trustees and the AME Zion Church, attended the service of thanksgiving.
Over protests of Aymer, who recently retired as seminary president, the board went ahead with naming the $3 million facility after him. It features a 3,500-square-foot main hall, 720-square-foot conference/dining room, two patios, a garden, buffet area and full commercial kitchen. During the service, Margaret Kluttz, the seminary’s director of development, thanked each donor who gave a gift to name areas in and around the center.
Bishop Richard K. Thompson, chair of the seminary’s board of trustees, recognized Sara Cook, who with husband Bob made the lead gift.
“This is a night all of our dreams are coming true,” she said.
Builder Clay Lindsay of Summit Development said his company was honored to be part of a building so significant in the history of Hood. He noted that some 73 percent of the money spent on the building stayed local through the use of vendors and subcontractors.
When Aymer came to Hood some 20 years ago, he brought a word unfamiliar to others, Thompson said. That word was “refectory.”
It was more than a cafeteria, Aymer explained. “It’s a place where people come to be refreshed spiritually.”
Bishop George E. Battle Jr., senior bishop of the AME Zion Church — the seminary’s sponsoring denomination — also had a hard time explaining exactly what a refectory is.
“I told them, it’s where people are gonna eat and talk,” he said. “I think they got that.”
He added, “Hood Seminary is open to all people. It’s not an African-American seminary. It is a people seminary.”
Hood is home to some 15 denominations, said Bishop Leonard Bolick of the N.C. Synod of the ELCA, which is the seminary’s next-door neighbor.
And Hood embraces that diversity. The project, Bolick said, “was God’s vision that came to us through Dr. Aymer.”
“God has touched the hearts of so many people to contribute to this project,” Thompson said. “God has given us a miracle in our own time.”
The building, he said, is debt-free.
However, money is needed for furnishings, and several of the speakers — including Aymer — did not hesitate to make that need known.
Neither did Thompson.
“We sit here comfortable and proud,” he said, “but we are not at the end of the road. We still have work to do. It’s clear what we need, and what we need is money.”
In his remarks, Aymer recounted the people he had gotten to know over his decades in Salisbury. Many of the donors are good friends, as well as Alexander, the architect.
The refectory, he said, offers students and faculty the chance to break bread together and hear one another’s stories.
“This is the kingdom of God in the making,” he said.
In her remarks, Alexander noted that the refectory was designed with a commitment to environmental stewardship and sustainability, with low maintenance and energy-efficient systems.
She also noted how the gently rolling ceiling — the main hall’s hallmark — called to mind the rolling clouds, and how Jesus stepped out on the rolling waves of the sea of Galilee, displaying trust in God.
As the sun set behind the hills and the skies darkened, people remained in the main hall, its windows now aglow with interior light, to talk and enjoy fellowship with one another — using the building for the purpose for which it had been designed.
A ribbon cutting and public reception takes place today at Hood from 4 to 6 p.m.