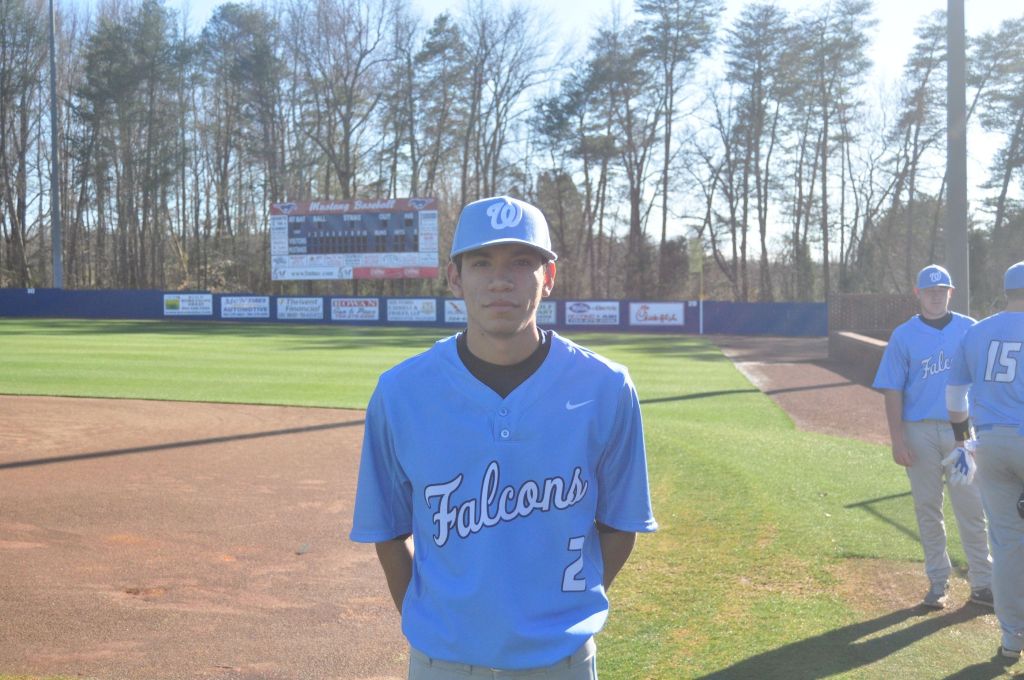 MOUNT ULLA — It’s a rare day when John Daugherty throws seven shutout innings and Carson still loses.
But the reigning county POY was outdueled by West Rowan junior Omar Bautista, who celebrated his 18th birthday Thursday by pitching the Falcons into first place.
“After the third inning he put the team on his back and started firing bullets,” winning coach Chad Parker said after vistiting West snagged a 4-3 SPC decision. “His velocity was good and he kept the ball down. He didn’t make many mistakes.”
Bautista allowed only one earned run and fanned nine batters — including five in a row during one stretch — in a complete-game 5-hitter.
“I felt amazing out there,” he beamed after West (5-2, 4-1) ascended to the top of the league standings. “I was throwing a lot of pitches they couldn’t hit. After the first two or three innings I just put my foot down and kept it there.”
West scored all the runs it would need to prevail in the top of the first against Carson starter Dillon Atwell, the cagey senior who lacked his usual command.
“We finally came out with the right approach against that guy,” Parker said. “Because he’s had our number. We swung at our pitches and we hit our pitches. We didn’t expect to knock him out of the box, but then again….”
Parker finished his sentence with a shrug, mostly because Atwell — who fired two innings of perfect relief last Friday — faced only four hitters and each scored. He was replaced by Daugherty without retiring a batter.
“Some days it’s hard to find the strike zone,” losing coach Chris Cauble said after Carson (4-3 overall) slipped to 2-3 in conference play. “He struggled and they captitalized by putting it in play and getting some timely hits.”
Perhaps the biggest was a scalding, two-run single to left by West’s Nick Collins that opened the scoring. When Atwell fell behind 3-and-0 to infielder Juan Gonzalez, Daugherty was summoned from center field.
“I wasn’t expecting that,” said Daugherty. “Dillon’s a stud pitcher who can work his way out of tough spots.”
Daugherty nearly did. He quickly worked the count to 3-and-2 before Gonzalez lined the Falcons’ second consecutive two-run base hit. All four West runs were charged to Atwell.
“I’ve played with Dillon forever — since we were little kids,” said Collins, who also doubled against Daugherty in the third inning. “I know some of his tendencies. He left me a fastball up. And once we got up 4-0, I had a feeling in my gut we were gonna win this game.”
Carson made it interesting against Bautista. The Cougars notched their first run in the last of the second when Colton Laws blooped a single into shallow right field and DH Matt Saul crunched a run-scoring double to left-center.
“That’s the only ball they hit hard against (Bautista),” Parker said. “Other than that he was in command.”
Carson tacked on a pair of unearned runs an inning later. With runners at the corners and none out, Daugherty lifted a sacrifice fly to center for one run. Another scored when Heath Mitchem crossed on the front end of a double steal.
The rest was up to Bautista, who pitched like he was conducting the Boston Pops. He braided an above-average fastball with a sweeping curve to stymie Carson’s lineup. He struck out the side in the fourth inning and retired 10 straight batters between the third and sixth.
“Mainly he got us to swing at his fastball, which was consistently low,” Daugherty said. “He had us guessing wrong.”
When Bautista rang up Ryan Bearden to end the game, he’d set down 12 of the last 13 men he faced.
“He’s a top-end player,” said West catcher Michael Pinkston. “He’s got the stuff. When he pulls it all together, he’s almost untouchable.”