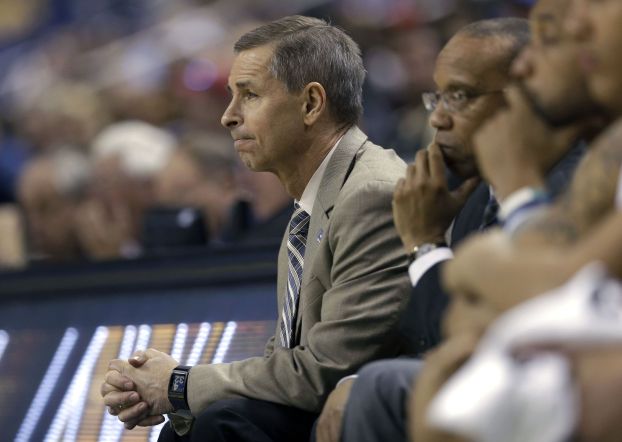 WINSTON-SALEM — The losses mounted for Jeff Bzdelik, and so did the public criticism of the Wake Forest men’s basketball coach.
The school announced his resignation Thursday after four mostly disappointing seasons.
He went 51-76 at Wake Forest with a 17-51 record in Atlantic Coast Conference play.
The Demon Deacons were 17-16 this year — their first winning season under him — but that wasn’t enough to satisfy an increasingly splintered fan base.
Some fans mounted a yearlong viral campaign for his job, taking out newspaper advertisements and purchasing space on billboards calling for his ouster.
Bzdelik, 61, did not return messages left by The Associated Press on his cellphone. But he said in a statement issued by the school that he resigned because “there needs to be a positive environment for the players to realize their potential.”
By Thursday afternoon, the trees in the campus quad had been “rolled” with toilet paper — just as they usually are after a big victory.
Athletic director Ron Wellman, who announced Bzdelik’s resignation, acknowledged that the criticism “would weigh on anyone,” but Bzdelik “never said a thing about it.”
Wellman said there is no interim coach yet, and that he is looking for “a winner” as a permanent successor but does not have a timeline because the replacement might still be coaching in the postseason.
“We are open to everything right now,” Wellman said. “Obviously, we have a list. We have a short list. We have a long list. Whether anybody on that short list emerges as our next basketball coach remains to be seen.”
Bzdelik’s resignation came one week after the Demon Deacons lost by 29 points to Pittsburgh in the second round of the ACC tournament — the second-most lopsided league tournament loss in school history.
After that game, he said he hoped for a berth to the lower-tier CBI because, “We certainly don’t want to go out like this.” But Wellman said Thursday that the school told the CBI it would not participate.
Bzdelik, a former Denver Nuggets coach, came from Colorado in 2010 to replace Dino Gaudio, who was fired after making the NCAA tournament twice in three seasons.
Wake Forest took a noticeable step forward this season under talented point guard Codi Miller-McIntyre and promising big man Devin Thomas.
The Demon Deacons swept their three in-state ACC rivals in Winston-Salem, including an upset of Duke two weeks ago in what turned out to be Bzdelik’s last game at Joel Coliseum.
Their victory total in ACC play steadily increased, going from a worst-in-league-history one in 2010 to four in 2011 to six both this year and last.
“Jeff is a man of great character and integrity who made every decision for the long-term benefit of the program and the university,” Wellman said. “Jeff felt that new leadership would help the program and allow the student-athletes to reach their full potential.”
It was an inability to win on the road — or win consistently — that frustrated fans.
Wake Forest won just two ACC road games in Bzdelik’s four years, and both of the teams the Demon Deacons beat — Boston College in 2012 and Virginia Tech this year — went on to finish last in the league.
He beat two nationally ranked teams in each of the past two seasons — only to squander any semblance of momentum that might have created.
Wake Forest followed the Duke win by losing by 13 points at Miami. The Demon Deacons knocked off then-No. 2 Miami in 2012-13 — and then lost their next three games.
Bzdelik’s rocky tenure was marked by roster attrition and head-scratching losses — a lengthy list that began with his first game at the school, a 2010 loss to a Stetson team that finished 8-23.
Part of the problem was the near-constant roster shuffling
He had just one fourth-year senior in each of the past two seasons and forward Travis McKie was the only player to last all four years under him.
Eight players transferred out during his tenure, including J.T. Terrell and Ari Stewart (Southern California), Tony Chennault (Villanova), Carson Desrosiers (Providence), Anthony Fields (Bradley) and Chase Fischer (BYU).