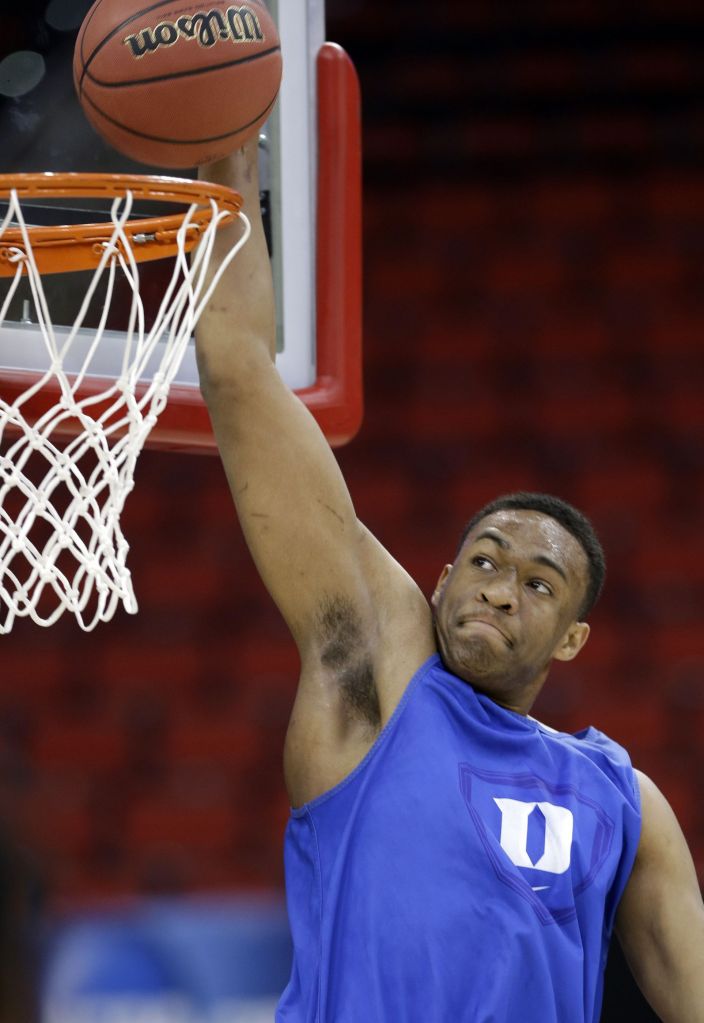 RALEIGH — There’s only one way for Jabari Parker and Rodney Hood to hang a banner in the Cameron Indoor Stadium rafters in their first — and maybe only — season playing together for Duke.
Lead the Blue Devils to a national title.
A handful of clunkers kept them from winning either the ACC’s regular-season or tournament championship.
They know they can’t afford any more — and it starts with their NCAA tournament opener against 14th-seeded Mercer.
No. 3 seed Duke (26-8) takes on the Atlantic Sun champion Bears (26-8) on Friday in the second round of the Midwest Regional.
Hood said the Blue Devils are “treating it like our last game, because if we lose, it is.”
Parker, the ACC’s freshman of the year, led the league in rebounding with an average of 8.8 and was its second-leading scorer, averaging 19.3 points.
Hood, a redshirt sophomore who transferred from Mississippi State, added 16.4 points per game.
Both have been labeled as potential NBA draft entrants, and though neither one has announced his plans, coach Mike Krzyzewski said at last week’s ACC tournament that “I wish we had him for more than one year.”
Parker said “this may be the last time we might play together with the guys on the team.”
He’s running out of chances this year to make his mark on a Duke program that under Krzyzewski has won four national titles and reached 11 Final Fours — but has only one since 2004.
Friday’s game marks the NCAA tournament debut for Hood, Parker — and for everybody in a Mercer uniform.
The Bears are in the tournament for the first time since 1985 and just the third time in school history.
They’re led by A-Sun player of the year Langston Hall at point guard. They enter the tournament on a four-game winning streak that includes a 68-60 victory over 2013 NCAA tournament darling Florida Gulf Coast.
“Obviously, most of the mid majors aren’t going to get too many top-50 recruits that are just planning on going to the NBA after one year, so I think that’s a big benefit to us,” guard Bud Thomas said.
———
Five things to know about the Mercer-Duke matchup:
A-SUN RIVALRY: Many fans remember FGCU pulling off those two upsets as a No. 15 seed and reaching the round of 16 last year. That run wouldn’t have happened had the seeds held up in the Atlantic Sun tournament — and had No. 1 seed Mercer beaten FGCU in the title game on the Bears’ home court. Forward Jakob Gollon said he had mixed feelings because he was happy for the A-Sun but, “We know that had we been the team that got the bid, we probably could have done something similar.”
EXPERIENCE COUNTS: Mercer is the only team in the country to start five seniors in every game, and with seven of them on the roster, ranks as the fourth-most experienced team in the country, according to statsheet.com. Thomas said that works in the Bears’ favor because, “We get to develop our friendship, both on and off the court, as teammates and roommates and everything, really.” He added “that helps us a lot and I think it’s shown in the past, these past couple of years especially, with so many mid majors coming in.”
HOME SWEET HOME: Duke had the shortest trip of any of its four Triangle rivals in the tournament. The Blue Devils won’t have to worry about fans from rival North Carolina booing them, either, because ACC champion Virginia is the other anchor team in the subregional. Duke is 2-0 in tournament games at PNC Arena and 32-5 in NCAA tournament games played in the state of North Carolina, but lost its last one — a 75-70 loss to 15th-seeded Lehigh two years ago in Greensboro.
NO HARD FEELINGS: Hoffman said he holds no grudges against Duke assistant Jeff Capel, who essentially fired him in 2006. Hoffman was Oklahoma’s interim coach after Kelvin Sampson’s departure and when Capel was hired as his permanent replacement, Hoffman was not retained and wound up coaching in the ABA before landing at Mercer in 2008. Hoffman said he understands the position Capel was in because “just as if I would have had the job, he got his own dudes.”
COACH K’S STATS: Krzyzewski is making his 19th straight NCAA tournament appearance and he’s the winningest coach in the history of the event, with an 82-25 record in it. No Division I team has a better tournament record than Duke, which is 99-33 in it.