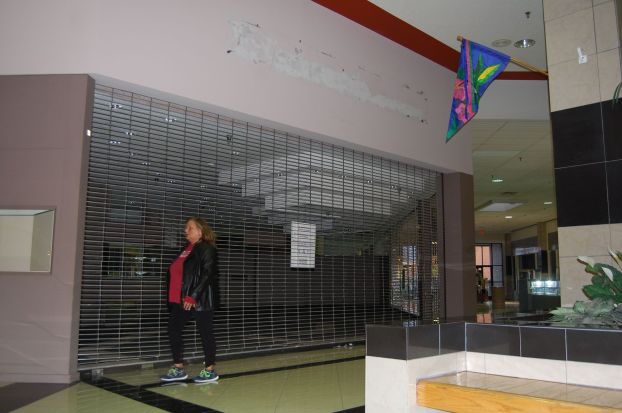 Gary Page announced this week the county’s initial plans for filling West End Plaza, and renovations are coming fast on the horizon.
The county manager said the veteran services and elections offices soon will be relocated to West End Plaza in the coming months pending approval from Rowan County commissioners.
“We wanted to put veteran services and the board of elections in there first. These are two departments we definitely knew we needed more space for,” Page said. “I’m working with a local architect, and we have identified the old Kay Jewelers store as the location for the new veteran services office.”
The new veteran services office will feature a lounge and three offices in the new location nearer to the Hefner VA Medical Center.
When commissioners meet April 7, Page and county staff will present the plan. If approved, the architect will start drawing blueprints for the new office, and Page said the location most likely will be ready by July or August.
At the same meeting, Page also will submit to commissioners plans to move the Rowan County Board of Elections to West End Plaza.
The 9,000-square-foot space located inside the mall’s second entrance hopefully will be filled by August, which will be after the primary and before the general election.
“On April 7, I’m going to the board with a recommendation to award the master plan for the mall,” Page said.
An architectural firm will be brought in to do a space needs assessment and participate in the discussions between all of the county department heads in sizing up exactly how much space is needed over the next decade to 15 years, Page said.
The mall also will serve as a business incubator for startup companies, Page said.
“I have two minority businesses, a bakery and a hair salon,” Page said. “They want to locate to the mall, and I’m looking at them as business incubator candidates.”
Page said the rent for these startups can be set to assist the owners to help cover overhead and expand, after which rent could be increased.
“The goal is for West End Plaza to be a true public-private partnership. It will not be 100 percent government or 100 percent private,” Page said.
Page said he is aiming to have three types of tenants in West End Plaza — county staff in offices, retail businesses and non-retail businesses such as a call center.
For Rowan County Board of Commissioners Vice-Chairman Craig Pierce, moving the veteran services and elections offices to West End Plaza ultimately will improve those departments.
“The two departments have been pigeonholed. At this new location, the veterans are close to the VA, and there is a bus line that goes right by (West End Plaza),” Pierce said. “They don’t have to seek transportation and stand around for two or three hours at the VA waiting. We have not done anything for our veterans to show the county is working to help them with their problems. This shows we do care about their service, and we want to give them the space we would have liked them to have all along.”
Pierce said West End Plaza has so much opportunity that commissioners would be remiss to nail down specifics unless a capital needs assessment was conducted. Then a master plan could be formulated.
“The master plan at the airport took about two-and-a-half years to produce. How are we supposed to develop a master plan immediately before we purchase a property?” Pierce said. “We saw the opportunity, and there was expandable space at a very affordable price.”
A master plan for West End Plaza has to go through an architect and doesn’t happen in 15 minutes, Pierce said.
What commissioners don’t want to do is use the space inappropriately, Pierce said.
Commissioner Jon Barber, the only one to vote against buying the mall, said he has been opposed to the use of taxpayer dollars for the purchase of a “dilapidated mall without a master plan” from the beginning.
He said “the only tangible evidence of this taxpayer purchase is the purchase price, and the rest is just on a wing and a prayer.”
“If you are working in the free enterprise system and asking shareholders to make an investment, those shareholders will not approve that investment unless they can see a return,” Barber said. “There is no difference in government. We’re talking about taxpayers and not shareholders. My concern all along is how we’re going to justify a return on investment without a master plan.”
Barber related the commissioners’ decision to purchase the mall to the city’s decision to move forward with Fibrant.
“They did so without citizen input,” Barber said. “Right now, there is no plan in writing and nothing to reassure taxpayers this was a wise investment.”
Despite the criticism, Barber said he plans to work to make the project successful and get citizens involved.
“I want to see it be a path toward success and not failure,” Barber said.