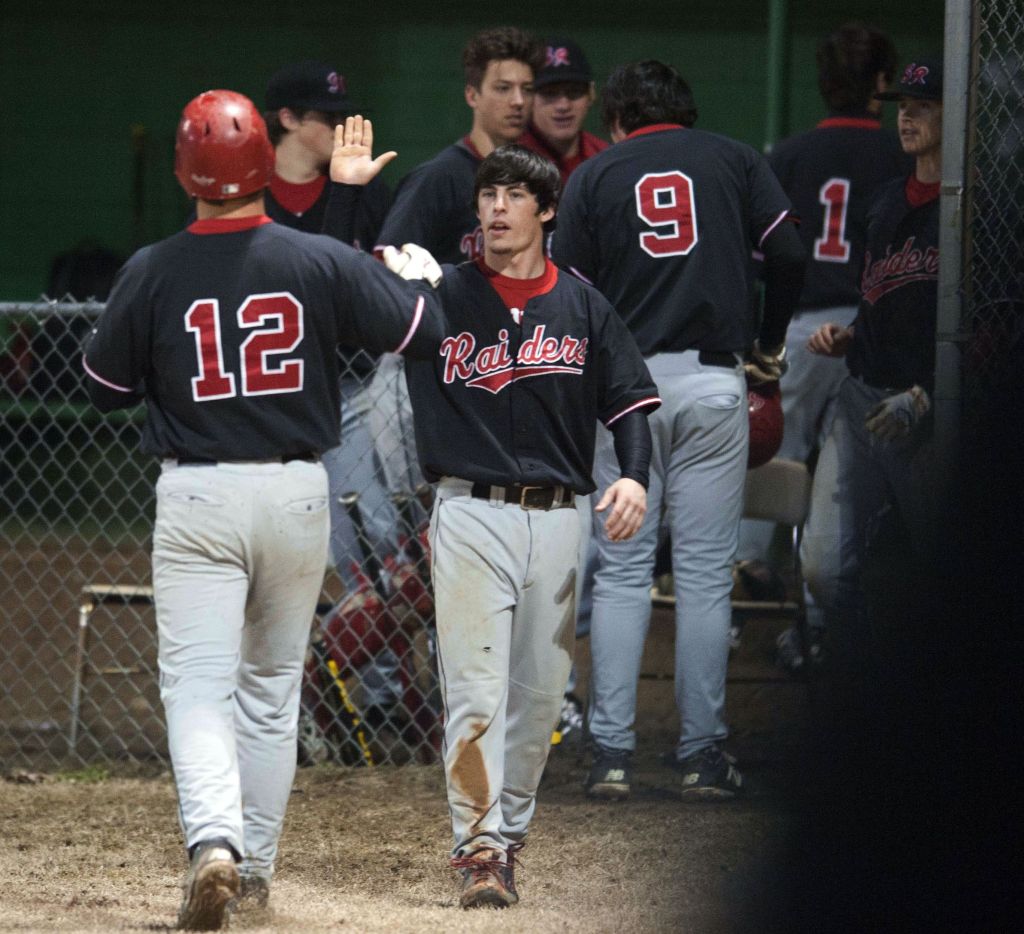 SPENCER — South Rowan lefthander Blake Johnson flirted with perfection for a while Wednesday night then happily settled for just plain domination.
The sophomore pitcher kept host North Rowan off balance all night, hurling an efficient five hitter, and leading the Raiders to a run-rule 11-0 victory in five innings. Despite a chilly night and a soggy field, Johnson (2-0) received plenty of support from his error-free defense plus a top to bottom offensive attack that pounded out 13 hits that improved the Raiders to 7-1.
“I was throwing pretty good,” Johnson stated, “I was just trying to keep it low and throw strikes. The defense played great behind me and we scored a lot of runs so you can’t ask for better than that.”
Johnson did flirt with a no hitter into the fourth by retiring the first 11 North batters he faced. An infield single to third by Cavalier catcher Jake Pritchard ended the no hit bid then Chance Mazza cranked a no-doubt double to left.
North Rowan (1-4) then loaded the bases in the bottom of the fifth with one out on consecutive singles by Carter Thomason, Spencer Loclear, and Lee Sells. But South and Johnson preserved the shutout and closed the game out in five innings when pinch runner Trey Stoner was nailed at the plate trying to score on a wild pitch. Johnson then fanned Noah Gonzalez to end the game.
North coach Aaron Rimer tipped his hat to Johnson for his performance. “We really had not seen anybody this season so far that could mix a good fastball and a curveball like he did.” he said. “It really showed tonight and he did a very good job of keeping us off balance.” At the same time, Rimer was disappointed that his team didn’t challenge the talented Raiders better. “For some reason we came out flat as could be and didn’t respond well when things started out badly in the first inning.”
As dominant as Johnson was on the mound, it was the Raider offense that set the tone for the night – early and often. Last season as a freshman, North lefty starter Brandon White baffled the South bats on more than one occasion. But last night they quickly figured White out. Tyer Fuller led off with a sharp single then Chandler Corriher beat out an infield hit. Both runners advanced on a White balk then Matt Honeycutt and Eric Stowe made it 2-0 with RBI singles. A third run came in off a throwing error and South had enough runs to win in the top of the first.
South added a single run in the third as Honeycutt boomed a triple to right center field to make it 4-0. The Raiders then exploded in the top of the fourth by parading 11 men to the plate and scoring 7 runs on 6 hits. The big blows were a two run single by Chandler Corriher then a two run double by Peyton Penninger that chased White.
“We have been working on our approach at the plate and trying to improve offensively,” South coach Thad Crismon noted,” When you are facing a good left handed pitcher like tonight you have to be disciplined and take a good approach. I thought we did a pretty good job at that.”
South’s 13-hit attack was produced by eight of the nine starters with the top of the order providing the most damage. Fuller and Corriher had 3 hits each while Corriher, Honeycutt and Penninger each drove in a pair of runs.
With the first day of spring today and sunny weather predicted, both teams will be back on the field tonight. North will host Pine Lake Prep in a non-league game while South jumps right back in to the Soutb Piedmont conference fray. They host Cox Mill today then travel to the Chargers’ field on Friday.
So how is playing three games in three days for South? “It will be fun and when the sun finally comes out it will be even more fun,” Crismon said. “We will just take it one game at a time and try to get better each time out.”