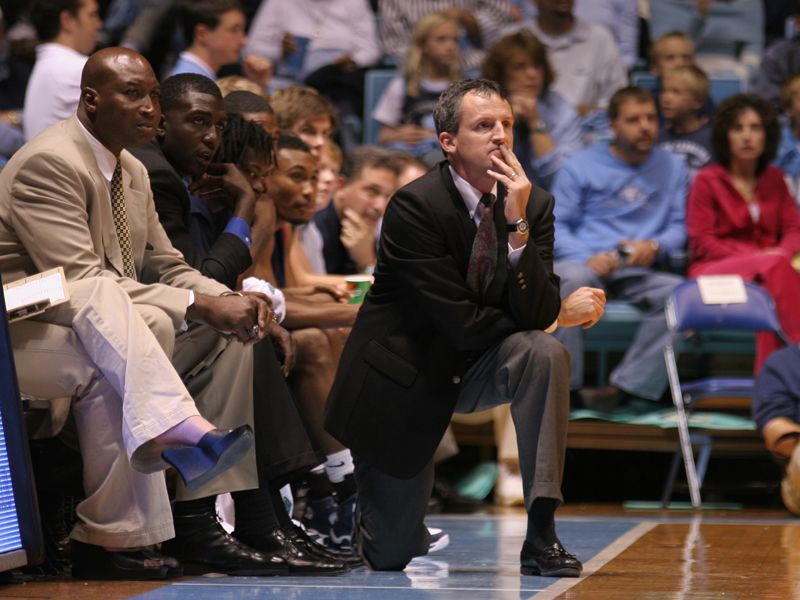 SALISBURY — Not all the March madness is on the court.
It’s become a month for coaching resignations, step-downs, force-outs and firings after disappointing seasons, and Catawba announced the resignation of men’s basketball coach Jim Baker on Tuesday morning.
“It’s like I’ve told my players a hundred times, you play the hand you’re dealt,” Baker said philosophically. “No complaints. No regrets. I wasn’t happy with the way we played this season, but right down to end, I enjoyed coaching the kids.”
Baker’s resignation wasn’t shocking. The last four seasons have been rough, rumors have flown, and Baker said he’s known for weeks that his time at a school he loved — and still loves — was drawing to a close.
Catawba president Brien Lewis said in a press release, “Coach Baker has much to be proud of during his time here, and we wish him nothing but the best. He will always be a member of the Catawba family.”
Interim AD Jeff Childress added that Baker was “a class act and represented the college well.”
To say it’s the end of an era is understating. Catawba has known just two head men’s basketball coaches in 54 years — legend Sam Moir from 1960-94, and Baker, the coach Moir hand-picked to succeed him, for the last 20 seasons.
“I wasn’t a very good player,” Baker said. “But Coach Moir loved me and wanted me to replace him.”
Baker’s won-lost record remains excellent, even after a 38-70 slate the past four seasons.
Officially, he guided the Indians to 344 wins and 236 losses. Moir’s teams won 58 percent of the time (546-399). Even with the recent struggles, Baker’s teams won 59 percent, so it’s not like he didn’t uphold a proud tradition.
“Obviously you want to win games,” Baker said. “But the priority for us always was bringing in good kids who could not only play basketball but represent the school well on the court and out in the community. Sixty-four of my 68 seniors graduated. I feel good about what we did and I feel good about how we did it — and we did it with a pretty low budget.”
Baker grew up four miles from Catawba, went to North Rowan, and was a son of Mr. North Rowan, Walt Baker, North’s AD and basketball coach for many years.
Baker’s late father tried to steer him toward business where the money was, but Baker’s heart was in coaching, and he probably was destined from birth to follow his father’s path.
Baker played four years for Moir at Catawba and graduated in 1978. He was an assistant coach at Davidson, Virginia Tech and VMI, maintaining the dream of being a Division I head coach for 15 years.
Then he was asked to return to Catawba, and did so, He assisted the offensive-minded Moir in Moir’s final season in 1993-94.
“I’d lead defensive practice for 45 minutes, and Sam would go walk,” Baker said. “Then he’d come back and say, ‘Well, Jim, if you’re through with this crap, let’s scrimmage.’”
Handed the reins prior to the 1994-95 season, Baker guided some powerful teams and Catawba became his dream job. In 1998, he was the region’s coach of the year. He was SAC Coach of the Year five times. His teams made the D-II playoffs nine times. There were nine 20-win seasons and two 19-win seasons.
Baker became known for late-charging teams, and Catawba’s SAC tourney success bordered on the supernatural. In 2004, Catawba won the SAC tournament as a No. 7 seed.
Catawba peaked under Baker with a talented, unselfish group that included Brian Graves, Antonio Houston, Donald Rutherford, Rob Fields and Dominick Reid. From 2007-10, Catawba won either the SAC regular season or SAC tournament and made four straight Southeast Regional appearances.
But graduation hit hard in 2010, and Catawba has been unable to reverse a slide. It’s been 13-15, 9-18, 9-18, and finally, 7-19 this season.
Part of the struggle has been the changing landscape of the SAC. Lincoln Memorial, Anderson and Coker were three of the SAC’s final four at this year’s tournament, and those three are recently added non-football schools where basketball is the highest-budget sport.
Baker said his program budget was a lean $28,500 this season, while Lincoln Memorial’s approaches $100,000. The SAC also voted in the fall of 2013 to remove conference restrictions on scholarships and allowing the standard Division II limit of 10. Catawba has 8.5.
“It’s going to take a lot of effort and a lot of money for things to get back where people want them to be,” Baker said.
While Baker pointed out financial challenges, including the loss of an assistant coaching position, he wasn’t looking to pass the buck for the shortcomings on the scoreboard.
This year’s team had three exceptional talents in Tyrece Little, Elon Edwards and Kijuan Arrington, but failed to put 40 minutes together with any consistency and didn’t qualify for the SAC tournament. The season ended with a jolting 110-61 loss at Lincoln Memorial.
“We had that unbelievable run a few years ago, and then we really thought we’d reloaded this time.” Baker said. “But we had some injuries, we had some issues, and then we didn’t get our full team together until after six games and 40 practices. Then we lost some overtime games, and it just didn’t happen for us.”
Now the Baker family has to make adjustments.
“Two-thirds of my oldest’s (Jamie is a Northwest Cabarrus sophomore) wardrobe is Catawba camp T-shirts,” Baker said. “Catawba is all my kids have ever known.”
He wants to continue to coach, preferably in this area where his family has put down deep roots, but he’s uncertain of what’s next. But he has a strong faith. He believes there’s a plan.
For the next few days, he’ll sit back and deal with Facebook, Twitter and email. Streams of coaches and former players have contacted him, letting him know much of an impact he had on their lives.
“That’s very appreciated,” he said. “It makes you think we did things the right way.”