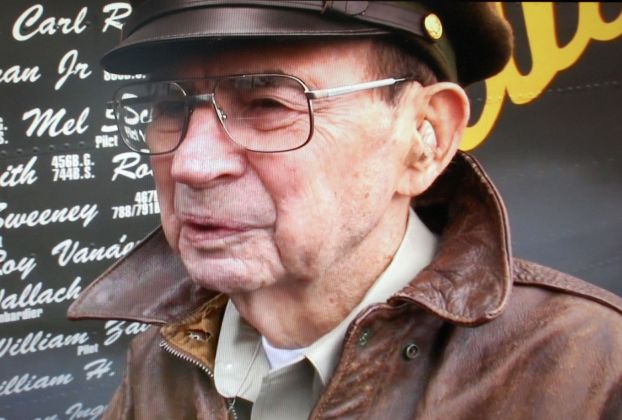 SALISBURY — It was one of those World War II missions when heroes are made.

B-24 Liberator pilot Herbert Broemer and copilot W. Marshall Smith, called “Bill” by his flying buddies, manned the point plane in a squadron making a bombing run on the Japanese-held island of Iwo Jima.

Smith, a young but veteran copilot by Jan. 27, 1945, was on his 36th bombing mission. As always, they flew the long, over-water trip out of an air base on the island of Saipan.

As the squadron delivered its payload over Iwo Jima, they met strong anti-aircraft fire from the island. A 75-millimeter Japanese shell exploded in the cockpit of Broemer and Smith.

“I don’t know if I was on that same mission,” fellow B-24 pilot D. Murray Price says today, “but I remember they got hit and got hit pretty bad.”

The explosion sent a piece of glass into Broemer’s left eye, and he lost use of his right arm.

“Bill was hit in the face,” Price says. “The left side of his face was shot off. He was out of it completely.”

The B-24 went out of control, but Broemer, using only his left arm, managed to get it straightened out. The crew lay Smith on the floor of the cabin, and the engineer took Smith’s copilot seat.

Working off a partially blinded Broemer’s instructions, the engineer operated the throttle and adjusted the settings.

The radio operator stood in the cockpit with them, watching the instruments. Somehow, the men working together, with two seriously injured crew members underfoot, guided the disabled Liberator back to Saipan.

It was a harrowing 750-mile return trip with two of the plane’s four engines shot to pieces.

Smith was a friend of Price’s from flight training school, and they were part of the same group constantly flying out of Saipan.

“He was in terrible shape,” Price says.

From that day on, Price knew only that Smith survived and was sent on to a hospital in Hawaii.

A native of Lexington, S.C., Price himself would go on to pilot or copilot 40 bombing missions in the Pacific before the war’s end.

Now 93, Price lives in Lexington, but he never could forget Smith or wonder what happened to him.

About a year ago, Jack “Lee” Jacobs of Salisbury dropped in on Price, an old business acquaintance from Jacobs’ days as a food broker.

Price told Jacobs the story of Smith and recalled that Smith often talked of Salisbury.

“He said he would gladly tell any of William Smith’s descendants about his early years as a pilot in the war,” Jacobs says. “I have tried calling a few Smiths in the phone book.”

But Jacobs had no success finding a connection to William M. Smith.

The Salisbury Post’s library held a file on “W. Marshall Smith” with two abbreviated clippings from 1945.

Both articles refer to Smith’s being seriously wounded Jan. 27 and his being visited by his sister, Blanche (Mrs. Frank) Buck of Wiley Avenue and brother G.C. (George Curtis) Smith of Mitchell Avenue.

William Marshall Smith had ended up at a hospital in Valley Forge, Pa. He already had been awarded the Air Medal with six Oak Leaf Clusters, the Distinguished Flying Cross and the Purple Heart.

“Lt. Smith received serious face and eye injuries and a fractured arm,” the story said. The outside of the Post file also had a notation written on it that said “blind.”

An article noted Smith had made his home in Gastonia for a number of years and was a graduate of Central High School there. He attended Belmont Abbey for two years before entering the Army Air Corps in June 1942.

“While in training,” the Post reported, “he made frequent visits to Salisbury and has many friends here.”

No doubt, Smith was visiting his sister and brother.

There’s nothing else on what happened to Smith after the report of his recovering in Valley Forge.

Frank and Blanche Buck would live in Salisbury until 1957, when they moved to Florida. The couple were prominent citizens. An accountant by trade, Frank Buck Sr. was onetime head of the local draft board and secretary for Coble Dairy.

Blanche Buck was a well-known member of First Presbyterian Church and served on its board of deacons. She also won several awards for her civic involvement.

G.C. Sherrill went on to become a partner in the long-established Sherrill and Smith accounting firm in Salisbury.

But what happened to William Marshall Smith remains a mystery.

D. Murray Price grew up in Lexington, S.C. After graduating from high school, he worked two or three odd jobs before taking the civil service examination and landing a job as a postal clerk.

After World War II started and he faced either being drafted or volunteering for military service, Price decided to be proactive and take the aviation cadet examination, which he passed.

He says he was like most red-blooded American boys at the time who saw romance and excitement in flying an airplane — something he had never done.

“I don’t know that I was any different from hundreds of others,” Price says.

While he was working at the post office, Price also had volunteered two to three days a month at the Army Air Corps base in Columbia.

Just seeing the planes coming and going and watching those pilots walk up and down Main Street with their wings got under Price’s skin.

“They were sharp-looking dudes,” he says. “I decided I’d rather fly over the world than walk over it.”

Price entered the Army Air Corps in August 1942, and his training took him west to California, Arizona and Nevada. That’s when he met Smith, whom he knew as “Bill.”

He thinks they probably struck up a friendship because few of the air cadets were from the South. During the training, he met one other guy from South Carolina and two from North Carolina.

Smith spoke so much about Salisbury, Price just figured that’s where he called home.

“We weren’t real close, but everyone was kind of like family,” Price recalls. “He was a heckuva nice fellow, pleasant, just a great guy.”

Price and Smith graduated in the multi-engine pilot class on Jan. 7, 1944.

Because Smith would stay as copilot for all of his missions, he left for Hawaii in February 1944, a couple of months ahead of Price, who stayed behind for additional training. In all but five of his 40 combat missions, Price flew as first pilot.

“He was such a nice guy and a good-looking guy,” Price adds. “Everybody liked Bill, and it was such a damned shame.”

During the war, the brothers who made up the bombing mission crews often resorted to gallows humor, Price says, because they had to find ways to laugh instead of cry.

The conversation at the mess hall the night Smith was wounded went something like this: If someone had to get his face shot off, why couldn’t it have been one of the ugly rascals around the table?

Price still marvels at the social and cultural aspects of the war and how it put together men from such different backgrounds.

Cook had worked in a sardine factory. Dulkowski was a tough Polish Catholic chap — the kind of guy who could sell you a piece of the Brooklyn Bridge.

Hinton was an aristocrat who liked to read the Classics — a blue blood who had been attending William and Mary. Marshall was a farm boy, and Wyatt was “The Brain,” because he had been a chemistry major at Murray State.

The Desautels kid from Vermont had been a state ping-pong champion and worked in a textile factory.

And with Price, all those guys were trusting a young postal clerk from South Carolina to get them home safe and sound. They named their Liberator “Complete Miss.”

“You lived together and you died together,” Price says.

In his 40 bombing missions — 30 out of the Marianas Islands and, after Iwo Jima was secured, 10 out of Guam — Price says his B-24 was hit by anti-aircraft fire many times.

The crew’s plane was hit on 15 consecutive missions during one uncomfortable streak. But not a single member of Price’s crew was ever physically hurt, though two men would suffer nervous breakdowns.

Price was discharged from the Army Air Corps Aug. 18, 1945. To qualify for discharge, he needed 85 points. Because of all the combat action he had seen, he had amassed 115 points.

Price left as a first lieutenant, and he received the Distinguished Flying Cross, the Air Medal with six Oak Leaf Clusters and two Battle Stars.

The first year back home in South Carolina, Price signed out a plane three or four times from a local airport to fly some friends around. But he allowed his license to expire, deciding if God got him through 1,000 hours of combat flying, “I don’t need to fly anymore.”

Price married in 1946, and he and his wife would have four children, seven grandchildren and seven great-grandchildren — all living within 100 miles of Lexington, he brags.

When Wyatt, “The Brain,” died in 2002, Price became the only survivor of his Liberator’s crew.

After their 40th mission in the Pacific, Price and his men were coming home on a troop ship of combat veterans for a 30-day leave. As they were arriving in San Francisco and passing under the Golden Gate Bridge, the men could see more than 100 people waving flags and handkerchiefs.

A brass band and dignitaries were at the port to give them a heroes’ welcome.

As the ship’s gangplank was lowered, the guys who were blind and missing limbs or still on stretchers were allowed to exit first.

Price says he suffered survivor’s remorse, for being whole.

“I had tears in my eyes and a lump in my throat and joy in my heart all at the same time,” he says.

“I remembered the guys being shot down. You didn’t feel like heroes — the heroes were guys like Bill Smith.”

SALISBURY — For several years, I have been driving by the kids’ makeshift soccer field, rubbed out of an open... read more