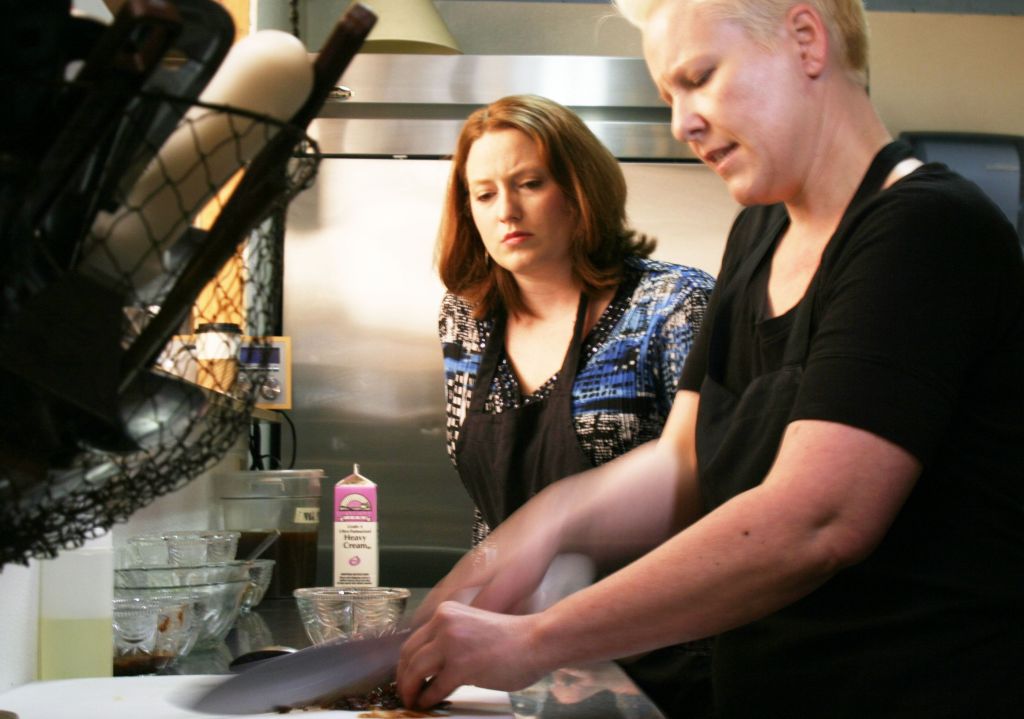 SALISBURY — After many suggestions from my friends on Facebook, I reached out to one of my favorite local restaurants, Sweet Meadow Café, and much to my excitement, they agreed to let me crash their kitchen.

Located at 118 W. Innes St. in historic downtown Salisbury, this hip bistro serves up some of the most delectable food around. Sweet Meadow Café opened in 1987 and was purchased by Heather and Scott Teeter in January 2010.

Heather and Scott lovingly tell the story about the ways in which their lives have been intertwined with Sweet Meadow for many years. One of my favorite stories happened about 15 years ago; Heather worked at Sweet Meadow Café when she was very, very pregnant with her first son, Cassady. She got stuck between several of the tables while serving lunch one afternoon. She also tells of how Cassady’s first real food was the pan-seared goat cheese salad, and he loves it to this day. The other “Teeter Tots”, Newt, 4, and Serafina, 1, are regular fixtures in the community as well, and they are growing up amongst the coolness that is Sweet Meadow.

With the purchase of the Sweet Meadow Cafe, the Teeters inherited the recipes for Sweet Meadow’s signature dishes, including the pan-seared goat cheese salad, red beans and rice, and their (to-die-for) crab cakes.

The Teeters believe in the “farm to fork” philosophy and have wonderful relationships with local farmers. Often, produce is picked in the morning, brought to Sweet Meadow’s doorstep, and beautifully served by lunch.

Their rotating menu of seasonal specials is eclectic and ranges from pumpkin ravioli with Amish blue cheese cream sauce in the fall, my personal favorite, to dishes that are vegetarian, gluten-free and vegan-friendly. Heather added that they serve lots of meat dishes too, so they “are just as bad as they are good.”

I was excited to learn that we were going to make Vegetarian Mexican Corn Chowder and that it was going to be served as the soup of the day.

What I learned was that the longest part of this entire recipe was the chopping. Because it was a corn chowder, Heather likes to keep all the ingredient textures similar and about the “same size as a grain of corn.” There was a bit of chopping involved, but I can tell you, it was so worth it.

The first thing we did was roast corn on a baking sheet sprinkled with a dash of salt, a dash of pepper, and about a teaspoon of cumin. Roasting the corn brings out its natural sweetness, said Heather. We roasted the corn on about 400 degrees for 15 minutes.

I learned very quickly that Heather does not measure her ingredients. She adds some, tilts her head curiously, and decides to add a little more here or there. This, I believe, is very brave.

While the corn roasted, we set about cutting up a loaf of crusty bread to make homemade croutons. Scott cut the bread into 1-inch cubes. Scott suggested freezing the bread a little so that it gets hard and is easier to cut without crushing it.

Heather then melted 1/2 cup canola oil and 1/2 cup of butter in microwave. When it was melted, we then added a few pinches of thyme, about 1 teaspoon of cumin, a few heavy pinches of salt and pepper and then whisked it. We drizzled the mixture over the bread cubes and stirred them, making sure all the cubes got wet.

Heather instructed me to add a few big pinches “magic green fairy dusk” — aka parsley. We spread out the cubes on a baking sheet. We then took out the corn and put in the bread cubes to bake on 400 for about 15 minutes.

So, on to the chowder! This recipe serves about 16 people.

In a huge soup pot, we melted butter (maybe a cup), added about two teaspoons of chopped garlic, 1 large diced red onion, 6 diced carrots, 1 stalk of celery, and 12 oz. of roasted Annaheim chili peppers. We stirred and let it simmer for a few minutes. The colors in the pot were gorgeous.

According to Heather, “The more colors, the better!”

Heather emphasized the mincing of the chipotles in order to allow them to “dissipate” in the chowder.

Then she added about six cups of vegetable stock, just enough to get all the veggies “swimming.”

We then added a quart of heavy cream and stirred. We brought it to a boil, reduced the heat, and simmered the chowder for approximately 15 to 20 minutes. After taste testing, Heather added some salt and pepper and another 2 cups of heavy cream, bringing it to her desired flavor.

After adjusting the chowder a few times to make sure the flavors were at their best, Heather ladled a generous portion for me to try. This was such a treat — hearty, savory and smoky (from the chipotle peppers). I took my family to Sweet Meadow Café that same night for dinner just so I could have another bowl. It tasted wonderful when we made it. It was even better that evening after all of the flavors settled!

• A few pinches of cumin

• A few pinches of dried thyme

On a baking sheet, spread corn kernels into a single layer. Sprinkle with salt, pepper, and about a teaspoon of cumin. Bake for 15 minutes on 400 degrees. Set aside.

• A few pinches of thyme

of salt and pepper

• A few pinches of parsley