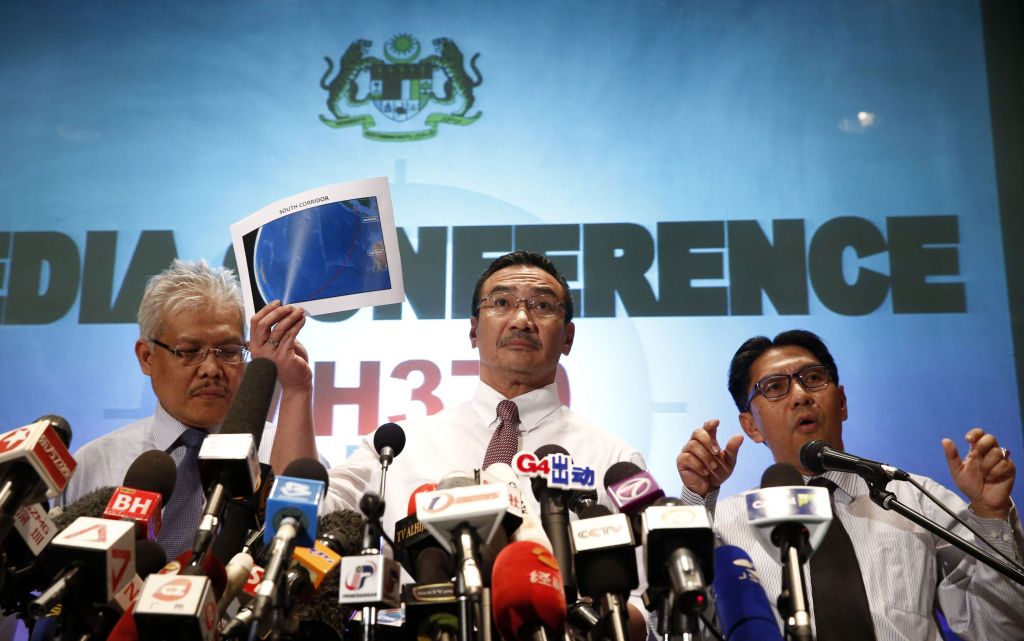 KUALA LUMPUR, Malaysia (AP) — Officials have revealed a new timeline suggesting the final voice transmission from the cockpit of the missing Malaysian plane may have occurred before any of its communications systems were disabled, adding more uncertainty about who aboard might have been to blame.
The search for Flight 370, which vanished early March 8 while flying from Kuala Lumpur to Beijing with 239 people on board, has now been expanded deep into the northern and southern hemispheres. Australian vessels scoured the southern Indian Ocean and China offered 21 of its satellites to help Malaysia in the unprecedented hunt.
With no wreckage found in one of the most puzzling aviation mysteries of all time, passengers’ relatives have been left in an agonizing limbo.
Investigators say the Boeing 777 was deliberately diverted during its overnight flight and flew off-course for hours. They haven’t ruled out hijacking, sabotage, or pilot suicide, and are checking the backgrounds of the 227 passengers and 12 crew members — as well as the ground crew — for personal problems, psychological issues or links to terrorists.
Malaysian Defense Minister Hishammuddin Hussein said Monday that finding the plane was still the main focus, and he did not rule out that it might be discovered intact.
“The fact that there was no distress signal, no ransom notes, no parties claiming responsibility, there is always hope,” Hishammuddin said at a news conference.
Malaysian Airlines CEO Ahmad Jauhari Yahya said an initial investigation indicated that the last words ground controllers heard from the plane — “All right, good night” — were spoken by the co-pilot, Fariq Abdul Hamid. Any voice other than that of Fariq or the pilot, Zaharie Ahmad Shah, would have been the clearest indication yet of something amiss in the cockpit before the flight went off-course.
Malaysian officials said earlier that those words came after one of the jetliner’s data communications systems — the Aircraft Communications Addressing and Reporting System — had been switched off, suggesting the voice from the cockpit may have been trying to deceive ground controllers.
However, Ahmad said that while the last data transmission from ACARS — which gives plane performance and maintenance information — came before that, it was still unclear at what point the system was switched off, making any implications of the timing murkier.
The new information opened the possibility that both ACARS and the plane’s transponders, which make the plane visible to civilian air traffic controllers, were turned off at about the same time. It also suggests that the message delivered from the cockpit could have preceded any of the severed communications.
Turning off a transponder is easy and, in rare instances, there may be good reason to do so in flight — for example, if it were reporting incorrect data.
The Malaysian plane does not appear to fit that scenario, said John Gadzinski, a 737 captain.
“There is a raised eyebrow, like Spock on Star Trek — you just sit there and go, ‘Why would anybody do that?”’ Gadzinski said of what he is hearing among pilots.
Other pilots in the United States cautioned against reading too much into what little is known about the actions of the Malaysia Airlines crew.
“You can’t take anything off the table until everything is on the table, and we don’t even have an aircraft,” said Boeing 737 pilot Mike Karn, president of the Coalition of Airline Pilots Associations.

Authorities have pointed to the shutdown of the transponders and the ACARS as evidence that someone with a detailed knowledge of the plane was involved. But Bob Coffman, an airline captain and former 777 pilot, said that kind of information is not hard to find in the digital age.
Authorities confiscated a flight simulator from the pilot’s home Saturday and also visited the home of the co-pilot in what Malaysian police chief Khalid Abu Bakar initially said were the first police visits to those homes.
But the government, which has come under criticism abroad for missteps and foot-dragging in releasing information, issued a statement Monday contradicting that account, saying police first visited the pilots’ homes as early as March 9, the day after the flight disappeared.
Coffman said the flight simulator could signify nothing more than the pilot’s zeal for his job.
“There are people for whom flying is all consuming,” he said, noting some pilots like to spend their off-duty hours on simulators at home, commenting on pilot blogs or playing fighter-pilot video games.
Although Malaysian authorities requested that all nations with citizens aboard the flight conduct background checks on them, it wasn’t clear how thoroughly the checks were done in Malaysia. The father of a Malaysian aviation engineer aboard the plane said police had not approached anyone in the family about his 29-year-old son, Mohamad Khairul Amri Selamat, though he added that there was no reason to suspect him.
“It is impossible for him to be involved in something like this,” said Selamat Omar, 60. “We are keeping our hopes high. I am praying hard that the plane didn’t crash and that he will be back soon.”
French investigators arrived in Kuala Lumpur to lend expertise from the two-year search for an Air France jet that crashed in the Atlantic Ocean in 2009. They said they were able to rely on distress signals in their search. But that vital tool is missing in the Malaysia Airlines mystery because the flight’s communications were deliberately silenced ahead of its disappearance, investigators say.
“It’s very different from the Air France case. The Malaysian situation is much more difficult,” said Jean Paul Troadec, a special adviser to France’s aviation accident investigation bureau.
Malaysia’s government sent diplomatic cables to all countries in the search area, seeking more planes and ships and asking for any radar data that might help.
The search initially focused on seas on either side of Peninsular Malaysia, in the South China Sea and the Strait of Malacca.
It was vastly expanded after Malaysian Prime Minister Najib Razak said over the weekend that investigators determined that a satellite picked up a faint signal from the aircraft about 71/2 hours after takeoff. The signal indicated the plane would have been somewhere on a vast arc stretching from Kazakhstan in Central Asia to the southern reaches of the Indian Ocean.
The vast scope of the search, now involving 26 countries, was underlined when a U.S. destroyer that already has helped cover 15,000 square miles (38,850 square kilometers) of water dropped out.
The Navy concluded that long-range aircraft were more efficient in looking for the plane or its debris than the USS Kidd and its helicopters, so effective Tuesday the ship was leaving the Indian Ocean search area, said Navy Cmdr. William Marks, spokesman for the 7th Fleet. Navy P-3 and P-8 surveillance aircraft remain available, and can cover 15,000 square miles (38,850 square kilometers) in a nine-hour flight.
The southern Indian Ocean is the world’s third-deepest and one of the most remote stretches of water, with little radar coverage.
Hishammuddin said Monday that searches in both the northern and southern stretches of the arc had begun, and that countries from Australia in the south, China in the north and Kazakhstan to the west had joined the hunt.
Had the plane gone northwest to Central Asia, it would have crossed over countries with busy airspace. Some experts believe it more likely would have gone south, although Malaysian authorities are not ruling out the northern corridor and are eager for radar data that might confirm or rule out that route.
The northern corridor crosses through countries including China, India and Pakistan — all of which have said they have no sign of the plane. China, where two-thirds of the passengers were from, is providing several planes and 21 satellites for the search, Premier Li Keqiang said in a statement.
Indonesia focused on Indian Ocean waters west of Sumatra, air force spokesman Rear Marshall Hadi Tjahjanto said.
Australia agreed to Malaysia’s request to take the lead in searching the southern Indian Ocean with four Orion maritime planes that would be joined by New Zealand and U.S. aircraft, Australian Prime Minister Tony Abbott said.
———
Associated Press writers Joan Lowy and Robert Burns in Washington, Chris Brummitt, Jim Gomez and Eileen Ng in Kuala Lumpur, Kristen Gelineau in Sydney, Australia, Christopher Bodeen in Beijing and Niniek Karmini in Jakarta, Indonesia, contributed to this report.