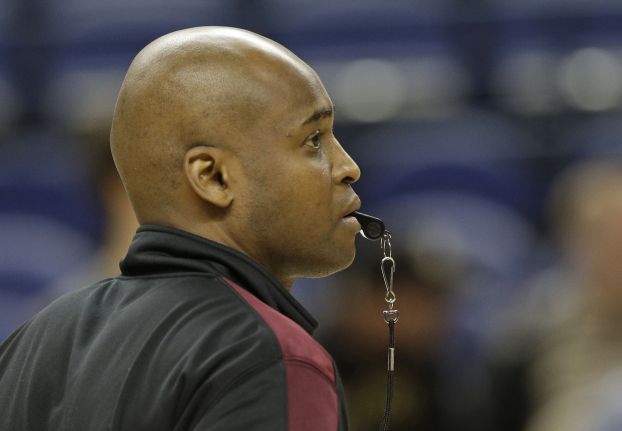 Virginia Tech has fired men’s basketball coach James Johnson.
New Virginia Tech athletic director Whit Babcock made the announcement Monday.
Johnson spent just two seasons as the Hokies coach.
Virginia Tech (9-22, 2-16) finished last in the 15-team Atlantic Coast Conference this season, it’s third last-place finish in a row.
Their season ended in a 57-53 loss to Miami in the first round of the ACC tournament on Wednesday, leaving Johnson with a record of just 6-32 against ACC competition as the head coach.
“I want to thank Coach Johnson for his dedication and hard work for our university and our basketball program over the past seven years,” Babcock said in a release. “A change of this significance affects many people and is never taken lightly, but I felt a change and a new direction was necessary for the long term, best interest of our department.”
Babcock said a national search for a successor will begin immediately.
The change ends an unusual stretch in the Hokies’ basketball history.
Johnson initially left the Hokies, where he was the associate head coach under Seth Greenberg, following the 2011-12 season to accept the same position at Clemson.
When Greenberg blamed Johnson’s departure on Clemson’s willingness to pay better, then-Virginia Tech athletic director Jim Weaver fired Greenberg and then gave Johnson his first head coaching job.
Johnson, however, took over the program in Blacksburg, Va., that had already lost highly regarded freshman Dorian Finney-Smith, who announced his decision to transfer to Florida, and then lost prized recruiting commitment Montrezl Harrell to Louisville.
That left Johnson with a roster that, at times, featured only six scholarship players.
Babcock, who replaced the retired Weaver as athletic director on Feb. 17, said at the time that while win and losses were a large part of the bottom line in assessing coaches, academics, work in the community and other factors also factored in.