Through the gift of dance, Catawba student inspires young people to pursue their dreams 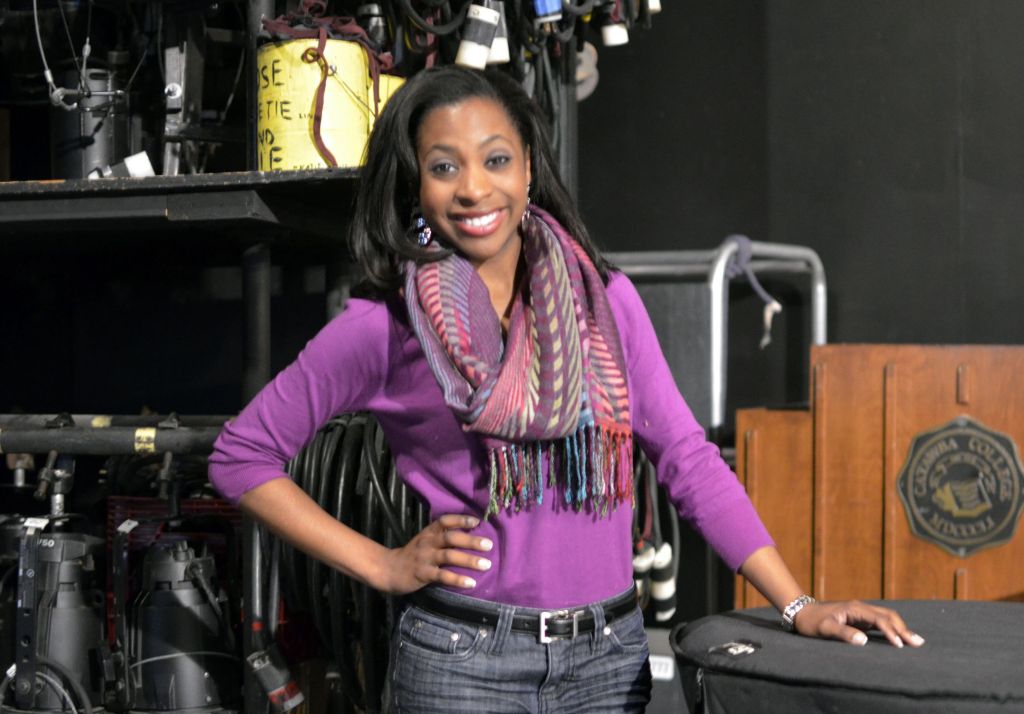 SALISBURY — TyNia Brandon says she knows what she wants out of life.

She’s got her sights set on Broadway. She wants to sing and dance.

Ask Brandon about the people she admires, and you’ll hear real joy in her voice as she talks about how the work of Jerome Robbins and Bob Fosse inspired her to learn choreography.

Ask her which roles she’d like to sing, and she’ll tell you how she wishes she could perform as Anita in “West Side Story.”

Laughing, Brandon adds that it’s impossible – Anita’s character is Puerto Rican, not African American – but she still loves the role.

In the meantime, Brandon says she’s going to keep auditioning, keep working hard and do all she can to make her dream come true.

It’s what she’s always done, even as a small child.

“The family would come over, and I’d be ready to stand on the table and sing!” TyNia said.

Her mother, Sharon H. Brandon, tells the story of TyNia, age 3, standing up to sing at a gathering.

When she sees her daughter perform on stage today, “it makes me really, really proud,” Sharon said.

What sets Brandon apart from others who love music and dance, and who dream of a Broadway career, is the fact she’s already accomplished a lot.

The 21-year-old Catawba College senior is looking ahead to graduation in December, with a major in musical theatre and a minor in dance.

In the meantime, she was crowned Miss Mecklenburg County on March 1, and will go on to compete in the Miss North Carolina pageant in June.

But there’s more that set’s Brandon apart than the crown she wears at public appearances.

Those who know TyNia Brandon praise the work she’s doing to pass on her talents, her creativity and her positive energy to young people.

About four years ago, Dennis Reed asked her to help him reach out to kids through the arts.

Reed first met Brandon in his role as youth minister of music at Friendship Missionary Baptist Church in Charlotte.

Brandon started taking dance lessons at age 8 at Precision Dance Center in Charlotte. She went on to perform as a liturgical dancer at her church.

Reed saw in her the potential to be a good role model for the young people he works with through Inspire the Fire, a nonprofit that provides arts education to at-risk kids and teens.

“In my time knowing TyNia Brandon, she’s always been a bright light,” Reed said in a phone interview.

Brandon said students choose the areas they want to be involved in – spoken word, music, acting, dance and more.

The goal is to expose children to the arts in a way that might not happen in public schools plagued by budget cuts.

Reed said The Experience already offered popular classes in hip-hop dance, “but I felt like it was very important for us to be well-rounded, to teach other styles,” he said.

When Brandon got involved with Inspire the Fire, she introduced other classic and contemporary dance styles.

“It was so funny, because at first … they were all saying, ‘We don’t want to learn ballet, we want to learn the fun stuff!’” Brandon said.

That soon changed, and this past summer, Brandon said, she taught 25 students in the contemporary class alone.

So much so that, when Inspire the Fire participants appeared on the 2012 season of “America’s Got Talent,” some of the kids Brandon had taught got to perform on national television.

What Brandon said impressed her the most was that those young people acted like professionals – “they didn’t change, and when they went back to school, they didn’t act any different,” she said. “They still work hard.”

Brandon is also working hard. For her pageant platform this year, she’s helping to promote Inspire the Fire.

Arts education can help students express themselves creatively, Brandon said, but at the same time, the arts are underfunded and under-appreciated.

“That’s the first thing that they take out of public schools, as if it’s not important anymore,” Brandon said.

“Learning how the body works, how to move and being able to look at yourself and analyze what you’re doing,” Brandon said.

“We want to inspire and motivate them to do something that we know they’re capable of, but others might not know they are capable of,” Brandon said.

“She is setting the standard,” Reed said. “Young girls, young women in our organization see her and know that they can achieve that, too.”

After years of taking dance lessons at Precision Dance Center in Charlotte, Brandon now works with the studio.

On Saturday mornings, she teaches classes for the youngest children, ages 3 to 6.

Tenitra Oates, owner and director of Precision Dance Center, said she met Brandon when Oates was choreographing a show.

“There was something special there that caught my eye,” Oates said.

From the age of 7, Brandon went on to become a competitive dance student, then a soloist.

After graduating from Butler High and being awarded a scholarship to Catawba College, Oates said Brandon wanted to continue being involved.

That’s how she started teaching, a calling that Brandon said is “so close to my heart.”

“With teaching, you can see the process that a child goes through,” Brandon said.

“And that’s what I’ve really enjoyed, watching children be transformed, learning a skill they never knew before,” Brandon said.

Oates has also been a teacher and mentor to Brandon.

“I like to call her my mini-me, because she’s done a lot of things I’ve done in the past,” Oates said.

That includes being named Miss Mecklenburg County. Oates won the pageant crown in 1995.

But before 2012, Brandon said she’d never thought about competing in pageants.

Oates saw potential for her student to succeed, and encouraged Brandon to compete.

Oates said the Miss America pageant system not only offers the chance to win scholarship awards, but also to get experience interviewing, promoting herself and networking.

“You really develop lifelong friendships, and you learn lifelong lessons, being a part of the Miss America organization,” Oates said.

Brandon said she wanted to win not only for the experience she’d get, but so that by winning she could help give back to her family which had supported her through college.

“My very first pageant I went for was Miss Mecklenburg County 2012,” Brandon said. “I was 19 years old at the time.”

She tried again for Miss Lake Norman 2012, and was first runner-up.

The following January, she won Miss Queen City, and went on to be third runner-up for Miss North Carolina in 2013.

As Miss Mecklenburg County, Brandon visits schools and talks not only about pageant competition, but about how students can excel.

Oates said Brandon’s pageant experience is also an inspiration to the children she teaches.

“They’re now excited. They want to be like Miss TyNia when they get older,” Oates said.

“It’s been a win-win situation for me, for her to be able to come in and talk about her experiences,” Oates said.

In separate interviews, both Oates and Reed compared TyNia Brandon to a shining light.

“She’s really a beacon of light in the studio, an inspiration and role model to those young students,” Oates said.

What’s more, Oates said, Brandon “is the triple threat. She can sing like no one I know. She has the ability to dance, she learns quickly and she’s also acting quite a bit at Catawba.”

“I really think she can be successful on Broadway, she just needs the right doors opened for her,” Oates said.

As she counts the months to graduation, Brandon remains involved in her community back home in Charlotte.

On March 29, Brandon said, there’ll be a performance to celebrate Inspire the Fire’s work with the CMS Takeover – a series of mini-workshops in Charlotte-Mecklenburg Schools.

In addition, she still sings at church, and she’s in an upcoming performance of “The Fantasticks” at Catawba.

Combine that with schoolwork and pageant appearances, and it makes for a very busy schedule.

“I try to keep everything organized,” Brandon said. “I have learned to master Excel spreadsheets so I know where I have to be, at what time.”

Sharon, her mother, is “my rock to lean on,” TyNia said. “When everything comes crashing down, she’s there.”

In a phone interview, Tyrone said his daughter’s singing had led her to the career path she wants to follow.

“The way she carries herself, with style and grace, it seems a lot of people really look up to her,” he said. “She’s been a very good inspiration to the kids in the schools.”

This past week, during her spring break from Catawba College, she visited schools in Mecklenburg County to talk to students. Tyrone said his daughter is thriving because of the work she’s doing to inspire others.

In the meantime, Brandon said she’s continuing to audition for every show she has time for.

And she’s still going to continue teaching and working with Inspire the Fire. “Any opportunity I have to help a child, I will definitely take it,” Brandon said.

“For TyNia, the possibilities are endless,” said Dennis Reed. “She is a born leader, and it’s evident that she is a born winner. Every challenge she has gone through has helped make her stronger.”

That passion and perseverance will help inspire a new generation of young leaders.