NCAA Tournament: Duke stays close to home as No. 3 seed 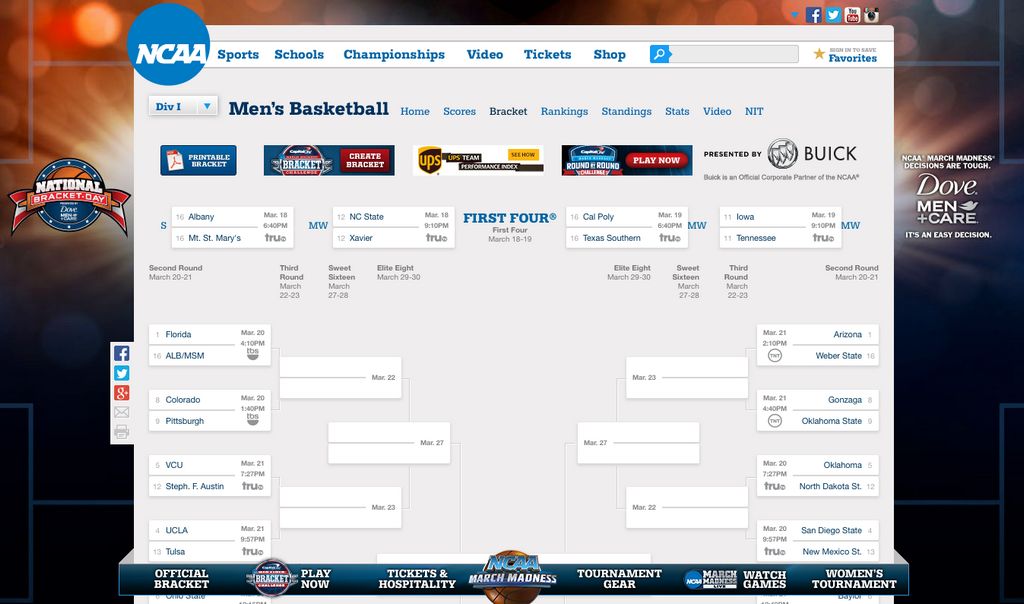 Mercer earned its first berth in the NCAA tournament since 1985 with a win over Florida Gulf Coast in the Atlantic Sun tournament championship game.

Duke, led by standout Jabari Parker, was third in the ACC during the regular season. The Blue Devils were a No. 2 seed in last year’s NCAA tournament, losing to eventual national champion Louisville in the regional final.

North Carolina will face surprise Big East champion Providence in its opening game of the NCAA tournament in San Antonio.

The Friars (23-11), seeded 11th in the East, stunned Creighton 65-58 on Saturday to earn the Big East’s automatic berth. The championship is the first for Providence since 1994 and it’s also the program’s first NCAA trip since 2004.

The Tar Heels (23-9), a No. 6 seed, have had a wild season. Despite playing all season without top scorer P.J. Hairston due to NCAA violations, they beat the top four teams from the preseason Top 25 — Kentucky, Michigan State, Louisville and Duke — while also losing to Belmont and UAB.

They started 0-3 in the ACC before going on a 12-game winning streak led by all-Atlantic Coast Conference performer Marcus Paige, but lost at Duke in their regular-season finale then fell behind by 20 points before rallying late in an ACC tournament quarterfinal loss to Pittsburgh.

“We have had some outstanding wins this year, both in and out of league play, over teams that received some very high seeds in the field, so we know we are capable,” UNC coach Roy Williams said in a statement Sunday night. “But we must play better than we have over the last two weeks if we want to reach our big-time dreams.”

The teams play Friday, their first meeting since 1979 and only their fourth ever.

No. 1 Virginia faces No. 16 Coastal Carolina

RALEIGH, (AP) — Virginia earned the No. 1 seed in the East Region after winning the Atlantic Coast Conference regular season and tournament championships, and will face No. 16 Coastal Carolina in the first round on Friday.

The Cavaliers (28-6) have won 16 of their past 17 games and beat Duke 72-63 on Sunday to claim the ACC tournament title for the first time since 1976. Virginia leads the nation in scoring defense.

Malcolm Brogdon, a 6-foot-5 sophomore guard, leads the Cavaliers with 12.6 points per game.

Coastal Carolina (21-12) earned its first trip to the tournament in 21 years by beating Winthrop 76-61 in the Big South Championship last weekend. The Chanticleers’ veteran coach Cliff Ellis has also led South Alabama, Clemson and Auburn to the NCAA tournament.