Bike ride part of tribute to ‘Heroes Behind the Badge’ 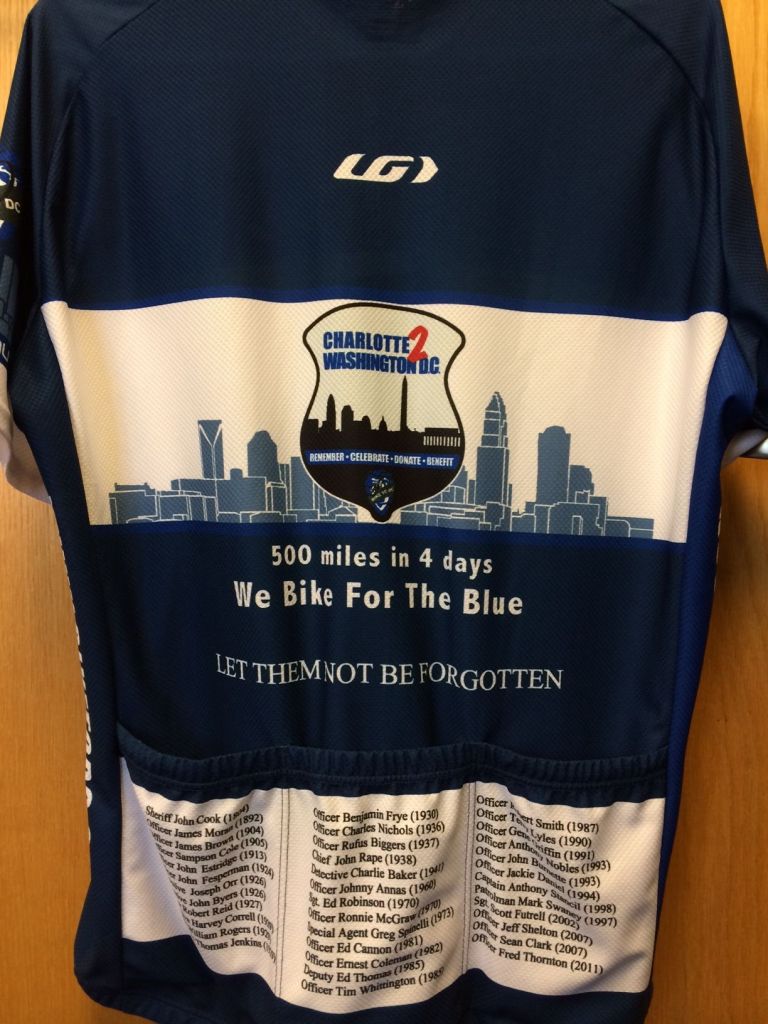 After completing my term of service with the U.S. Army at Ft. Bragg, where I was assigned as an parachute infantryman in Charlie Co. 2/505 Parachute Infantry Regiment, I started college at Rowan-Cabarrus Community College. Soon after beginning college courses I enrolled in Basic Law Enforcement Training, also at RCCC. I was hired to work as a police officer with the Salisbury Police Department.

Now, 16 years later as a police officer, I have seen the best and the worst in people. I no longer work in Salisbury, but I still live there. I began working for the Mooresville police department eight years ago.

During my time as a police officer, I have continued my education, and am now attending classes at N.C. A&T State University in Greensboro and my faith in God has grown. It has not always been this way though. Trials and tribulations during my career have tested my faith in humanity and God. Although I believed the Lord gave his son Jesus Christ to die for us, I still had spiritual doubts.

During the last year, I felt something inside of me wanting to come out. What was I holding back? What was I feeling? Then it hit me, it was a feeling of good, a feeling to not only say what I support, but do things to prove my faith and trust in God. I had to figure out what to do with these new feelings and how I was going to share them.

I have taken part in the Ride and Run to Remember at the National Law Enforcement Officer Memorial in Washington, D.C. I first attended this October run with Maj. Richard Anderson, also a police officer with the Mooresville Police Department.

The next year, my family attended the run with me. What a great feeling to take part in a great event, with my wife and children, in the nation’s capital.

I have put together a special screening of Modern City Entertainment and the fund’s second documentary, “Heroes Behind the Badge: Sacrifice and Survival” to be held April 22 at the Charles Mack Citizen Center in Mooresville. Doors will open at 6:30 p.m. Police departments from the area are invited to set up tribute tables to honor injured and fallen officers from our communities. Tickets are $10 per person and are available online at eventbrite.com.

If you cannot attend but would like to make a donation, you can do so by going through eventbrite.com or going to First Community Bank in downtown Mooresville. All proceeds will be given to both the NLEOMF and to the North Carolina Chapter of Concerns of Police Survivors.

Putting this event together was not enough for me. I will also be joining approximately 100 other officers in May for the annual “Law Enforcement Bike to D.C.”. We will cycle 500 miles in four days to the NLEOM. We will attend the candlelight vigil on Tuesday, May 13, on the Law Enforcement Memorial grounds. This is an emotional event at which survivors of officers killed in the line of duty attend in remembrance, and newly inscribed names on the memorials wall are recognized.

To participate in the ride, I must raise a minimum of $700 to cover expenses along the way such as food, hotel and vans to bring us back to Charlotte on May 14. I have set a goal to raise $1,500. The extra funds raised will go to the Charlotte-Mecklenburg FOP Foundation, which “provides financial assistance to families of slain officers, officers who become incapacitated due to sudden illness or injury, and officers affected by catastrophic circumstances which could leave them and their families without financial security,” according to the ride’s website, http://bike2dc.com/images/howyoucanhelp.htm, you can also donate by visiting this link. Please help by donating and adding my name as the cyclist you are donating to, or if you know another officer who is riding please donate to them.

Law enforcement is a noble profession and a great responsibility. As police officers, we not only protect people, but we are charged with taking individuals freedoms away to make our communities a safer place to live and work. The charge we are given is a heavy weight to bear and unfortunately this means that officers are hurt or killed protecting people we may not even know. Police officers must have the courage to overcome their own personal fears of death or injury when called upon to do so. Those that have given everything should be remembered. It is only right to remember those heroes that have paid the ultimate price because they wear the badge. This ride to D.C. and screening of the documentary are just a small way in which I can salute the fallen officers.

For more information about either of these events, contact Officer Aaron Moore at 704-239-7713 or email amoore@ci.mooresville.nc.us.