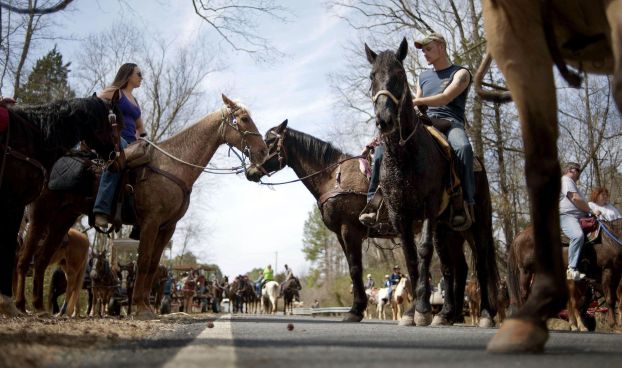 ROCKWELL — Wayne Coburn, the wagonmaster, snapped the reins of his Tennessee walkers and led the whole group out Saturday morning, as he has done for almost 30 years.
Well into the afternoon, the Spring Wagon Train tugged, pulled, bumped and clippety-clopped its way over rolling country roads of eastern Rowan County and northern Cabarrus County.
The people in the rubber-wheeled wagons or on horseback represented all manner of occupations: truck driver, landscaper, businesswoman, nurse, beautician, assembly-line worker, mechanic, pharmacy clerk, mule trainer, heavy equipment operator, park ranger and plenty more.
But the wagon train demonstrated quickly what they have in common: a deep love for horses. After a long winter, the East Rowan Saddle Club’s Spring Wagon Train also gave them a chance to reconnect, socialize and take in — at their own pace — things you never see from cars.
Connie Reece, a veteran of these wagon trains, said it’s eye-opening — the beauty in our own back yard.
“If you just slow down long enough,” her husband and wagon driver Ed Reece added.
In the rhythm of a wagon train — Saturday’s trip went 18 miles — the participants appreciated the farm ponds, old barns, rusty roofs, creeks running parallel to the roads and hay bales dotting the hillsides.
They come close to curious bulls, cows, goats and horses in pastures. They laughed at frantic dogs and cherished cool breezes. On trips such as this you might see wild turkeys and deer.
As she passed each home, Connie Reece said she wondered what story went with it. You do a lot of wondering on a wagon train, she said.
ggg

The riders are as likely to wear ballcaps as cowboy hats, and they come in all ages, shapes and sizes, as do their horses and mules.
“This is a dying thing right here,” Ed Reece said of wagon trains in general, though many are still held throughout North Carolina in the spring and fall.
“I hate to say it, but you see less and less people getting into it.”
The East Rowan Saddle Club has been conducting spring and fall wagon trains for 50 years. Saturday’s edition attracted seven rubber-wheeled wagons and more than 50 riders on horseback (and a few on mules).
The Reece wagon is pretty typical. It is built for comfort and safety. Ed Reece installed the bucket and bench seats from a Ford Astro minivan.
He has four-way flashers, a CD/radio player, side mirrors, a center foot brake and a triangular reflector sign in back. Connie packed tuna and egg salad sandwiches, drinks in a cooler, potato chips and candy.
She also had blankets and jackets.
The chuck wagon lunch break on Vineyard Road offered hot dogs and other treats for those who didn’t bring their own picnics. The little trailer with a slanted roof and drop-down counter was pulled into place by a pickup.
As always, when they started out Saturday, the wagons and riders on horseback tried to stay together, but pretty soon their line stretched out, maybe for a mile.
“You’re always waiting on people,” said Reece, who kept his wagon right behind Coburn’s all day. “We try to keep bunched up, but you know how people are, they get talking.”
A couple of breaks on the side of the road in both morning and afternoon gave everyone a chance to catch up and take care of business, if needed.
If they had to use the bathroom, the boys went into the woods on one side of the road and the girls, the other.
“The bathroom is the second oak on the left-hand side when we stop,” Reece advised a male occupant in his wagon.
You see some interesting things on a wagon train.
Slider, a border collie, balanced on the back of Vegas with his master Ed Tucker in the saddle in front of him.
Hershey, the 6-year-old dog of Kenny and Phyllis Swinson of Rockwell, confidently walked up to the carcass of a dead rabbit in the road, picked it up and ran back to the Swinsons with her new treat.
“She was going to bring home a souvenir today,” Kenny Swinson said. Hershey liked to spend much of the trip walking alongside the Swinson’s wagon, pulled by horses Hank and Peggy.
The back of the Swinson’s wagon carried a sign that said “Manure Happens.”
“Occasionally,” Kenny clarified.
In Rockwell, Kenny Swinson deals with cars all week, and Phyllis has a beauty shop.
“I think that’s why I like it so well,” Kenny said of participating in local wagon trains. “It’s about as far away from cars as you can get.”
The same kind of thing could be said for Donna Starnes, wife of East Rowan Saddle Club President Richard Starnes.
She works on a Concord assembly line making Yamaha parts.
“This is relaxing after a hard, stressful work week,” she said, riding her horse, Misty.
Richard Starnes has a back-breaking job during the week in commercial floor covering. In 10 years of rodeos, he also rode bareback and saddle broncs.
The saddle club has long been Starnes’ diversion, and he made sure the Spring Wagon Ride included a lot of extras this year such as a Saturday night dance, a mule-jumping contest, a poker run during the ride and Friday night bingo.
“We try to promote a family atmosphere,” he said.
Dimples Holbrook rode with her sister, Mary Coburn, in the Coburn’s wagon. At one point for exercise, Dimples, Mary and Connie Reece walked some of the trek.
Holbrook said she loved the friendship and fellowship of the Spring Wagon Train.
“We’re all crazy,” she added. “The dance tonight — it’s great.”
Ashley Kirk rode her horse Hollywood Saturday. She played music on a radio the whole way, and her 4-month-old pup, Skeeter, rode with her, strapped into the saddle.
“It’s beautiful,” Kirk said of the day. “I love being on my horse.”
ggg

Meredith Harwell, who runs her own title insurance company in Mooresvile, has been breaking and training horses a long time.
“The best way to spend a Saturday,” she said of the wagon train and being with horses in general. “I enjoy it every minute I can on the weekends.”
Harwell placed her saddlebred Rusty directly behind Reece’s wagon for much of the trip, just to slow him down.
“He has two speeds, fast and faster,” she explained.
Little Man and Jack haven’t been worked hard since last Easter. “They’re a little antsy,” Tonya Tucker said as her husband, Vaudrey “Putt-Putt” Tucker worked on their harnesses.
The saddle club held an auction and raised $1,300 for the Tucker family. The Tuckers lost almost everything when a January fire destroyed their house in Kannapolis.
They hope to move a doublewide in from Georgia, and the $1,300 will cover the transportation cost.
Tucker’s nickname comes from the way he tools around in his wheelchair.
The Tuckers, and his father, Vaudry Sr., love the spring trains.
“Life slows down when you give yourself time to enjoy it,” Vaudry Jr. says.
Ronnie Brinson and his 10-year-old granddaughter, Raven Moss of Faith, made Saturday’ ride together on horseback. They arrived on the Saddle Club’s eight-acre spread Friday night and slept over.
On both camping nights, many people build campfires.
“It gets everything off your mind,” Brinson said of the day on the wagon train. “It’s relaxing, and you have to have a love for horses.”
ggg

Kim and Justin Webb have had their girls, Gracie, 10, and Kaelin, 7, riding since they could sit in the saddle with Kim.
Kim has owned horses all her life and is an experienced trainer.
Kaelin was secure in her saddle with the help of some well-placed Velcro. The girls already participate in rodeos, but rides such as the Spring Wagon Train are a perfect outdoor activity for the whole family.
“It’s just our getaway,” Justin Webb says.
Johnny Guinn and his new quarterhorse, Hank, were sizing each other up before the ride. “We’ll know more about it today,” Guinn said of how he expected Hank to do with the wagon train. “He’s a good pet. I can’t swear to much more.”
Hank did great. “To appreciate this ride, you have to ride in it,” Guinn said later.
Pat Smith, a Rowan County beautician, rode Blue Bell, a horse she rescued. Smith said she loved being out with nature Saturday and seeing all the other horses, cowboys and cowgirls.
It was good therapy for her and Blue Bell, she said.
Smith rode with Mount Ulla’s Brian and Ellen Simmons, and their son, Devin.
“It soothes the soul,” Ellen said.
The Spring Wagon Train of the East Rowan Saddle Club is one of the bigger local ones. Many of the same riders also participate in the wagon train held in April by the West Stanly Saddle Club in Oakboro.
ggg

The Spring Wagon Trains have managed to avoid any major accidents over the past half century. Cars and trucks passing the train Saturday used plenty of caution and showed respect to the horses and riders.
“Of course, when people aren’t paying attention — that’s when most accidents happen,” Ed Reece said. “… “We try to keep people (drivers of vehicles) moving all the time.”
The Reeces have eight grandchildren and seven of them already are riding horses. Ed often puts the little grandkids in between his legs in the wagon to give them a chance of learning to use the reins.
As a truck driver, Reece fights traffic all day in his runs in and around Charlotte. So steering his horse-drawn wagons along the back roads of Rowan, Cabarrus and Stanly counties provides a great balance.
At times Saturday, he handed his wagon’s reins over to Nicole Brenneman, a close friend of the family’s. Meanwhile, Connie Reece sat in the back, asking others to imagine what it must have been like for the settlers going west in covered wagons.
“We’ve talked about that before,” she said. “But there we go, a-wondering again.”

A final afternoon filled with obstacles