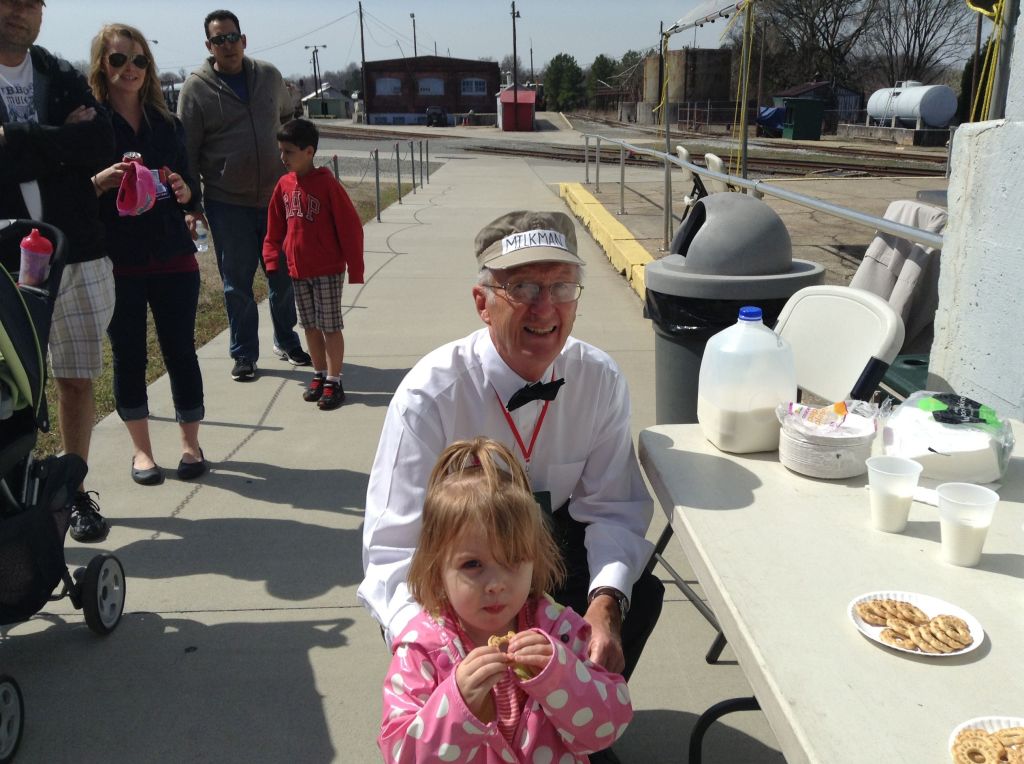 A day of unlimited train rides and much more brought out large crowds on Saturday for the first of a long line of spring events at the North Carolina Transportation Museum in Spencer. Publicity and Marketing Director Mark Brown said, “We have something going on every weekend till the end of May, both onsite and at other venues.”
Saturday’s weather played a big part in the nice turnout, but Interim Director Kevin Cherry said, “We can schedule trains, but we can’t do much with scheduling the weather. It has been an all-around fun day. There is nothing better than seeing kids having a good time. They don’t even know that they might be learning something too.” Cherry is also the North Carolina Deputy Secretary of the Department of Cultural Resources.
Activities surrounded two trains running at intervals from 10 am till 3:30 pm. Attached to the museum’s regular passenger train was the newly repainted Clinchfield No. 100 rail car. On the other track, the Lehigh Valley No. 126 steam engine pulled a train of old cabooses. The always popular turntable, built in 1924, offered rides also.
Special tours were given of the restoration of the museum’s DC-3. Volunteers have been working on the plane about once a month and will soon increase that frequency during the summer. Walter Turner took visitors on a tour of the work area while other volunteers provided descriptions of the ongoing work. The plane was built as a World War ll military plane, but never went into service. Piedmont Airlines bought the plane and converted it into passenger service. It was retired and later found in a junkyard, then was restored and remained at the Life and Science Museum in Durham for 25 years until acquired by the transportation museum. Volunteer Charlie Hall, a former Piedmont employee from Kernersville, comes to the museum each month to help out. Hall said, “I have ridden on this plane and I have fueled it. I look forward to seeing it in good shape again.”
Visitors had a chance at panning for gold on a water sluice provided by Reed Gold Mine. Greg Pell and Samran Combs of Winston Salem saw an ad in their paper. Pell said, “We have wanted to visit the museum and the gold panning attracted us. We are rock hounds also.” Just about that time, with a little help from Larry Neal of Spencer, manager of Reed Gold Mine, Samran was able to find a small piece of gold in her pan. Quickly, the next group panning found a small flake of gold too. Neal, working along with Aaron Kepley of Rockwell and Amber Covington from Rockingham, kept busy helping folks get the hang of panning. Neal added, “It isn’t often that we get two pieces of gold that quick.” Reed Gold Mine will offer panning from April 1st to October 31st. The dirt used for panning is from Little Meadow Creek, the same site that Conrad Reed found his 17 pound nugget in 1799.
Popular and new this year was the “Whistle Machine” owned by the Watauga Valley Railroad Historical Society and Museum from Johnson City, Tennessee. The trailer has various train whistles from as early as 1900, and all are operational. There is a clanging bell for kids to ring while they listen to the different sounds of railway history. Carter Lane of Trinity rang the bell while covering his ears and then ran from the sounds of the whistles back to his grandmother, Tonya Spratt of Stewart, Virginia. Spratt said, “We saw the Spring Kick Off announcement and decided coming here would be a great way to spend some time together. Carter loves the big trains.”
The Hunt and Kuhn families had a big reunion at the Spring Kick Off. Rab and Zaynah Hunt from Durham brought sons, Aiden and Langston, and all were touring the museum with Donna Kuhn of Shelby, grandmother to the boys. Kuhn said, “We have 12 family members here in all. Langston always wants to ride a train. This is going to be his first ride.”
Some young train and transportation enthusiasts had a snack in mind. Lillie Weeks of Sanford led her mom, Caley and dad, Ryan, and little brother Karsten toward Rich Miller, the Melville Dairy Milkman. Miller had cookies and milk for the kids. The Melville Divco milk truck was also on display.
Other activities included a day long presentation of speakers on various aspects of the historic Clinchfield railroad. Other popular activities, displays and demonstrations included the Rowan Aeromodelers, kid’s crafts, the Wright Flyer, the luxurious Doris and Loretto rail cars, and Paul Brown’s antique fire trucks.
Upcoming events for the N.C. Transportation Museum include a big diesel Streamliner event from May 29th to June 1st. Cherry said, “We already have 19 engines committed from all over the country and are hoping for 21.” Streamliners were all built from the 1930’s to the 1950’s.
The Easter Bunny train is returning on Saturday, April 19, Brown said, “We will have a steam engine again pulling the caboose train.”
Good things are happening at the museum. For more information, go to www.nctrans.org