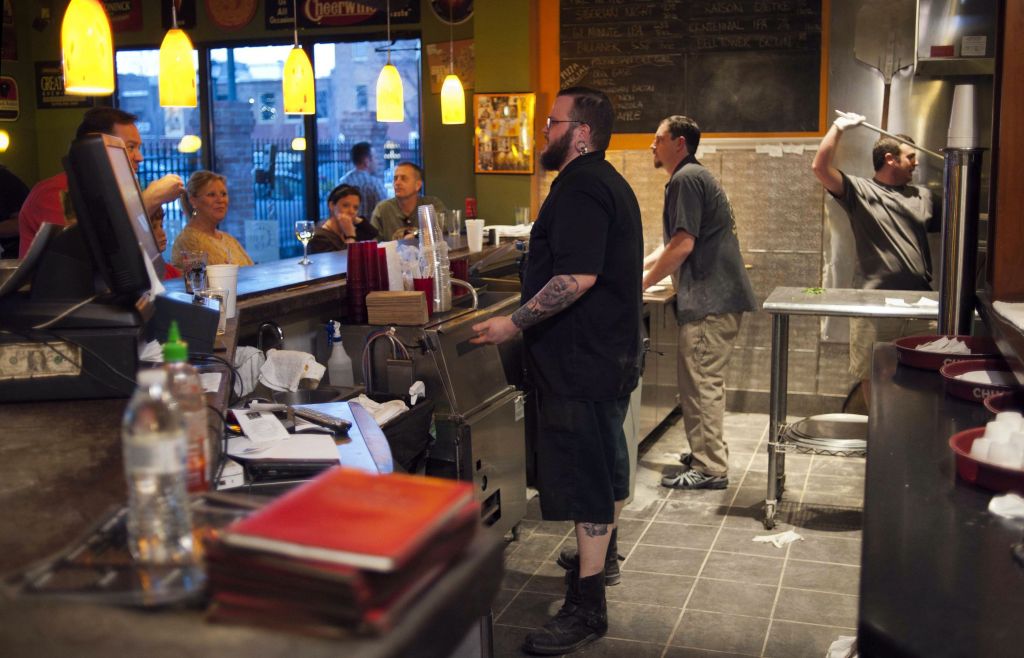 SALISBURY — The Salty Caper in downtown Salisbury is going to appear on an episode of Travel Channel’s show “Food Paradise.”
Film crews arrived at the restaurant at 155 S. Lee St. around 10 a.m. Saturday and were shooting as employees served up pizza and poured beer until late evening.
Although the crew’s supervising producer said he could not be named because of the show’s policy on production publicity, he said it takes “a 12-hour day to (film) a segment of the episode.”
The producer said venues like the Salty Caper are targeted to appear on “Food Paradise” through the work conducted by the show’s research team.
“We have story producers. We have associate producers. We read every publication out there, and we have sources all over the place,” the producer said. “We look up global things and all kinds of different awards.”
The goal of filming is to capture the entire atmosphere, he said.
“For Travel Channel, it’s selling the food and the destination,” the producer said.
An eight-man crew constantly intermingled with customers and staff to get the best shots during the restaurant’s dinner rush.
“Right now, we’re doing all Carolina — North and South,” the producer said.
Working feverishly to get pizza out to hungry customers, Salty Caper employee Mike Mauldin said he has been working at the restaurant for five years and hasn’t had an experience like Saturday’s film crew coming in.
“We learned about a month ago that (a Travel Channel crew) was going to be here. Other than tidying up a little, we really aren’t doing anything we normally wouldn’t do,” Mauldin said. “It’s pretty exciting, though.”
Mauldin said he doesn’t know when the show will air, but he “most definitely” will be tuning in.
Salty Caper’s food warrants a show like “Food Paradise” coming to take a look, Mauldin said.
“I’m making the food, so of course it is great,” Mauldin said. “They are here for the whole atmosphere. I guess that is what got us a spot on the show.”
Sitting at Salty Caper’s bar, Jane Hartsell said she is a once-a-week patron at the restaurant.
“Everybody is just like they are every other day. Nothing is different,” Hartsell said. “(Crew members) were very professional. This place definitely justifies having this experience.”