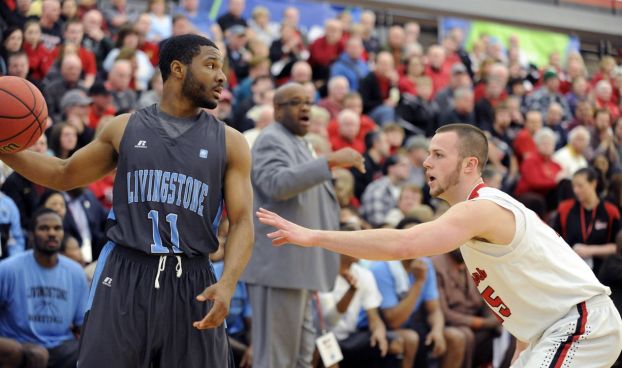 EAST STROUDSBURG, Pa. — Livingstone’s senior backcourt of Mark “AJ” Thomas and Jody Hill went out with a bang on Saturday, but the Blue Bears still lost 99-98 at East Strousburg in the first round of the Atlantic Regional.
Thomas and Hill combined for 65 points, with CIAA Player of the Year Thomas registering 36 and All-CIAA running mate Hill getting 29 against the second-ranked team in Division II.
Hill drilled five 3-pointers, some of them from very deep. Thomas knocked down four 3s and went 10-for-14 at the foul line for coach James Stinson’s CIAA champs.
When Livingstone appeared to be on the ropes, down 12 with 10:48 remaining, Hill produced a long-range spree that lifted his teammates back into the game. Thomas had his own flurry late in the game, personally wiping out almost all of a 10-point deficit against the regional’s top seed.
The eighth-seeded Blue Bears (21-8) trailed 99-89 when Eric Dubose found Thomas for a 3-point look with 2:08 remaining that cut the Blue Bears’s deficit to seven points.
After Dubose rebounded an East Strousburg miss, Thomas was fouled on a 3-point attempt and cashed in all the three free throws with 1:20 left to make it a four-point game.
Livingstone forced a turnover, and Thomas buried another 3-pointer with 47 seconds on the clock.
With 15 seconds left and leading by one, East Stroudsburg star Whis Grant drove for a layup, but the basket was wiped out by offensive goaltending.
Livingstone got a timeout with 8 seconds left, but Thomas missed a jumper with 3 ticks left, and Zechariah Runkle secured the rebound for the Warriors (29-1) to end the struggle.
East Stroudsburg led 48-46 at halftime.
Livingstone got 10 points from Dubose and 10 from Emarri Bailey. Eric Mayo had seven points and 10 rebounds. Mayo and Anthony Welch blocked two shots each.
Grant made five 3-pointers and scored 29 for East Stroudsburg. Freshman Rasheed Moore scored 18, and Will Brown came off the bench for 16. Runkle pulled down 15 rebounds. Matt Tobin had 11 points and 11 assists. East Stroudsburg won a regional game for the first time since 1990.
Livingstone was outrebounded 54-44. Livingstone shot 45 percent, while East Stroudsburg shot 41.5 percent.

GREENSBORO — It’s been a season of firsts for No. 6 Virginia. The Cavaliers are savoring their latest one by... read more