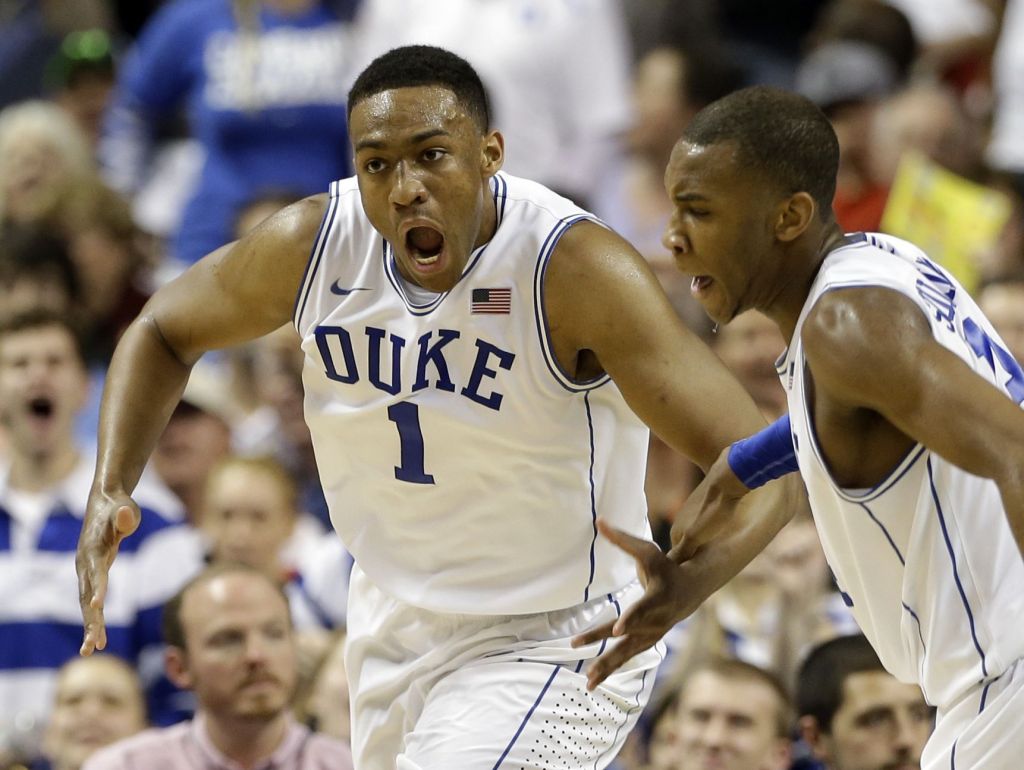 GREENSBORO — Jabari Parker and T.J. Warren kept trading baskets in the kind of shootout expected from the Atlantic Coast Conference’s top two scorers.
Because No. 7 Duke finally figured out how to slow Warren when it counted, the Blue Devils are playing for an ACC championship.
Parker scored 20 points and the Blue Devils beat Warren and North Carolina State 75-67 on Saturday in an ACC tournament semifinal.
Rasheed Sulaimon added 16 points for the third-seeded Blue Devils (26-7) while Rodney Hood had 14 points and keyed the defensive effort against Warren, the ACC player of the year.
Warren led the league with an average of 24.9 points while Parker was second at 19.2 points per game.
In this one, Warren scored 21 points but was just 4 of 13 after halftime while facing a barrage of double teams.
“Rodney did a good job on him just to keep him to 21,” coach Mike Krzyzewski said. “You can overcoach, and we overcoached our preparation. He was doing what we asked him to do, and it wasn’t working, and he said, ‘Coach, let me just play him my normal way.’ That was better.”
Duke earned its 31st championship game appearance and first since 2011.
The Blue Devils will play No. 6 Virginia on Sunday. Duke’s 69-65 win in January stood as the Cavaliers’ lone conference loss until Maryland beat them last week.
The seventh-seeded Wolfpack (21-13), playing their third game in three days, shot just 36 percent in the second half — after hitting 67 percent in the opening half — and were denied their first title game berth since 2007.
“N.C. State was fighting for their lives,” Sulaimon said.
Lennard Freeman had 13 points and Anthony “Cat” Barber finished with 12 for N.C. State, which for much of the day looked capable of pulling off a second straight resume-enhancing upset after knocking off No. 11 Syracuse in the quarterfinals.
“I hope they take a look at our team and see how much better we are than we were at the beginning,” N.C. State coach Mark Gottfried said. “If you win at Pitt, beat Syracuse and beat Duke, hell, you’re about a Final Four team then. I think we showed that we certainly belong in the field of 68.”
The Wolfpack might have gotten one more upset win, had it not been for Duke’s 20-7 run in the second half that was fueled by three N.C. State turnovers and a spate of missed shots.
“I’m not going to force it to get past two people,” said Barber, who said he was double-teamed as well. “They just did a great job of defending. … They just kept their composure throughout the game.”
Parker scored six points during the burst that pushed the Blue Devils’ lead into double figures for the first time.
A botched lob to N.C. State big man Jordan Vandenberg led to an open court the other way for Parker, and his authoritative dunk over a sidestepping Barber made it 49-45 with 15 minutes left. Quinn Cook ended the run with a 3 that made it 61-49 with about 91/2 minutes remaining.
“We got a lot of easy baskets from our defense, and once we got into a rhythm, our shots started falling down and we got rolling,” Sulaimon said.
N.C. State never could string together a game-threatening run after that, and the Wolfpack’s best chance down the stretch came when they closed to 67-59 on Freeman’s jumper with about 3 minutes left.
Hood missed the front end of a one-and-one but the rebound went to Parker — who finished with a momentum-shifting dunk to put Duke back up by 10.
Cook had 14 points for the Blue Devils, who gave N.C. State its most lopsided loss of the season in the teams’ only previous meeting — a 95-60 thumping at Cameron Indoor Stadium in which Duke seemed content to let Warren score and clamp down on everyone else.
At least early in this one, though, the Blue Devils once again couldn’t stop anyone.
Duke — which got only one defensive stop in the final 5 minutes of a one-point quarterfinal victory over Clemson about 15 hours earlier — was just as porous against the Wolfpack.
N.C. State hit 13 of 15 shots over an 11-minute stretch and scored on 15 of 16 possessions, with the only empty trip in that span coming when Warren missed the front end of a one-and-one.
“First half, neither team could stop one another,” Krzyzewski said. “In the second half, we just played better defense.”
This one also had all the intensity expected of a Tobacco Road rivalry: During one whistle-free sequence, Barber went skidding across the floor after a collision with Parker, who then stormed downcourt and put up a jumper through hard contact from Freeman.
— drawing howls from both sets of fans.