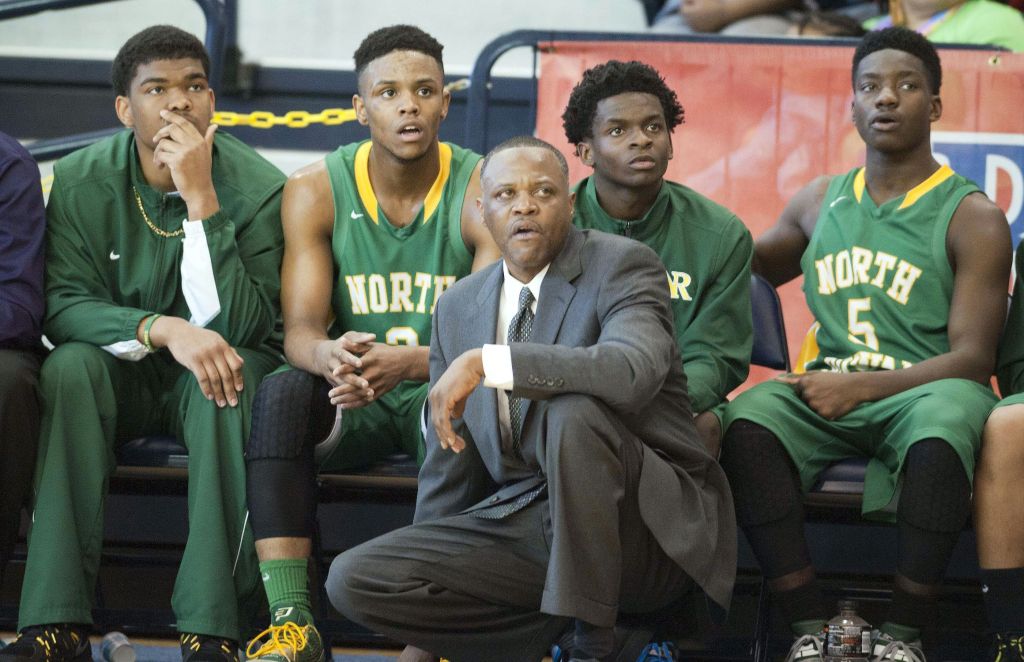 SPENCER — Practice officially started for North Rowan and Kinston on Oct. 30.
After 135-day journeys, filled with ups and downs, but mostly ups, their paths intersect today in Raleigh’s historic Reynolds Coliseum.
North Rowan’s Cavaliers (21-5) and Kinston’s Vikings (25-4) will meet at 2:30 p.m. for the 2A state championship at a venue where the first 13 ACC tournaments were held. It’s a red-on-red arena where the Wolfpack’s David Thompson showed fans the heights to which small-town North Carolina basketball players could fly.
North Rowan clashed with Thompson’s Crest Chargers back in 1971 at Catawba’s Goodman Gym in the days of the old Western North Carolina High School Activities Association. There’s a lesson to be learned from that tournament game even now. The Cavaliers, who had a strong team and had broken Boyden’s 38-game winning streak earlier, threw all they had at Thompson and slowed him down, but Thompson’s teammates killed them. Crest won 65-51.
North faces a soaring talent today in 6-foot-8 Brandon Ingram, a junior who is ranked among the nation’s best small forwards by ESPN and who is being recruited avidly by ACC schools, That’s not to suggest that Ingram is Thompson, just that he’s awfully good.
North coach Andrew Mitchell is well aware of Ingram, but he’s also aware that Kinston’s “cast,” as Mitchell refers to the supporting players surrounding around a star, is solid. Juniors Darnell Dunn (6-4), Mykel Hart (6-5) and senior guard Andrew Lopez are capable of huge games if North focuses everything on Ingram.
Ingram’s stats are excellent but not staggering — 19.8 points per game and 9.0 rebounds per game. Those are relatively modest figures compared to Shelby’s Clemson-bound Gabe DeVoe, who North survived on the road in the third round. DeVoe averages 34 points and poured in 39 against North. But the Cavaliers held Shelby’s “cast” to 31 and lived to play another day.
The stat that is eye-catching regarding Ingram is he shoots 53 percent from the field. That’s deadly accuracy for a high school player, and Ingram is shooting a sizzling 62 percent in the playoffs.
The stat sheet reveals that in the four games Kinston lost this season, Ingram shot below 43 percent — 3-for-12, 8-for-19, 10-for-25 and 6-for-16. He’s going to get 20 or more, but North has to make him work for all of them and take a lot of shots to get his average.
Coach Perry Tyndall’s Kinston team averages 58 points, which isn’t scary, but the Vikings’ 50-percent shooting as a team is impressive. North may not have anyone shooting 50 percent.
North can get up and down and averages a flashy 70 points per game, but this is likely to be another defensive-minded grinder with the scoreboard failing to escape the 50s. North scored 58 in its tight regional wins against East Rutherford and Smoky Mountain.
North allows 59 points per game.
North has an advantage in that its nerves and will have been tested frequently in down-to-the-wire games. While Kinston has won its last 10 games by double digits, it’s been well-documented that North was an eyelash from losing as early as the second round. North has won four straight that could’ve gone either way. You can look at that two ways. Either North has been really fortunate — or North has players who can make plays with games on the line. Probably it’s the latter. North has three guys in Michael Connor, Michael Bowman and Jalen Sanders who are genuine stars, and they’ve all shown they can make something positive happen in the toughest circumstances.
Kenyon Tatum, Dalton Nelson and Josh Handy also will be important today. North may need good or great games from its first six to prevail. Alexis Archie (if he’s able to go), Shareef Walker and Joe Scott also could be called on for key minutes.
Kinston had been an amazing force in eastern basketball, Kinston, which gave the world Cornbread Maxwell in the 1970, Charles Shackleford in the 1980s and Jerry Stackhouse in the 1990s, won 2A titles in 2010, 2012 and 2013, and the Vikings also captured the 3A crown in 2008 before moving down a classification.
North Rowan will be trying to win the third state title in school history. The Cavaliers won 2A in 1986 with a 29-2 record and won 1A in 2011 with a final slate of 27-5.
North is 2-for-2 in state championship games. The Cavaliers won their 13th conference championship this season and their 11th conference tournament.
Key points in the season?
The first turning point was an ugly loss to Mooresville on Dec. 12, The Cavs went solo in that one, but it was a necessary loss. It was a defeat that reminded them that they needed each other and that they weren’t as good as they thought they were. It was time to listen to coaches and get back to work.
The other key moment came on Feb. 21 at Lexington on the road for the CCC tournament final with a No. 1 seed at stake. Lexington had beaten North once on that floor, but North destroyed the talented Yellow Jackets thoroughly in the rematch. It was obvious that night the Cavs had the stuff to make a charge.
About 15 hours after they dismantled Lexington, the Cavaliers were back in the gym practicing for a run they’ve earned with sweat as much as talent.
North has won 11 straight. Kinston has won its last 14. Neither has lost since January. It should be fun.
Finally, two numbers need to be mentioned. Bowman, a senior, has 989 career points. The milestone won’t be on his mind today because his focus will be on finding a way to win his final game, but fans should be aware of it. It’s special. Only 10 Cavs in 56 years of hoops have reached 1,000. Connor is one of them.
The other number is Mitchell’s outstanding record coaching girls and boys basketball in Rowan County for a relatively short time. In two seasons with the Salisbury girls, he was 58-3 and he’s 100-18 in four seasons with North’s boys. That’s 158-21, which is winning 88.3 percent of the time.
Mitchell is 3-for-3 in state championship games and looking to climb one more mountain.