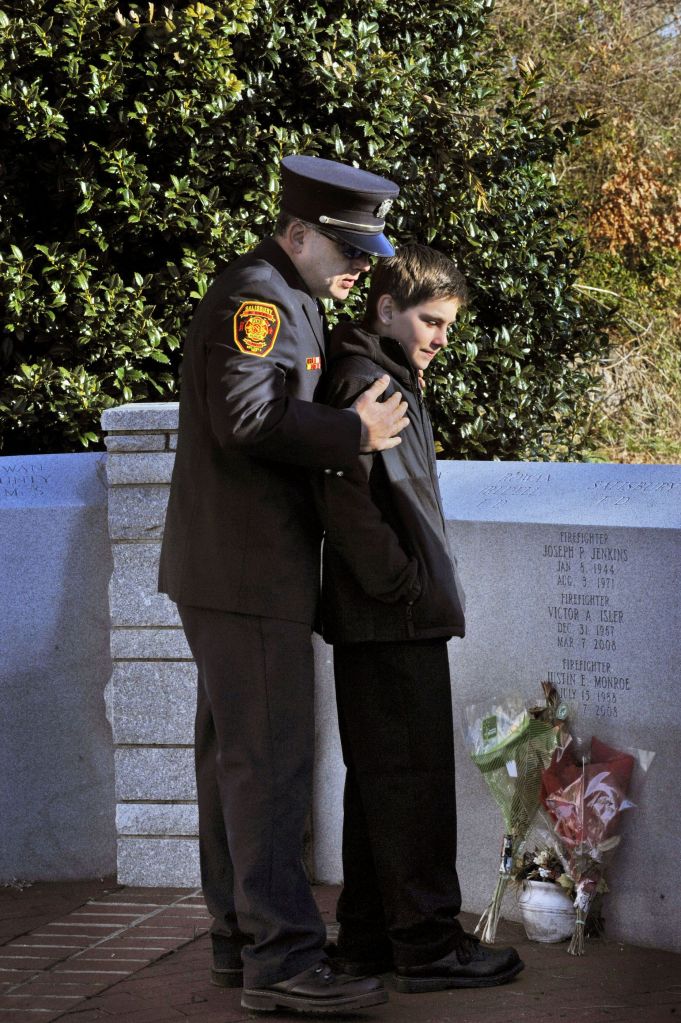 It’s been six years since Salisbury firefighters Victor “Vic” Isler and Justin Monroe died while battling a fire at Salisbury Millwork. For members of their family, friends and their fellow firefighters, the pain of their loss is no less intense.
Isler and Monroe were remembered during a Friday morning memorial service at the Firemen’s Memorial in Chestnut Hill Cemetery.
There were a few tears, but mostly it was a time for the firefighters and members of the Monroe and Isler families to reflect on the sacrifices their loved ones made and those that emergency responders continue to make.
Isler, 40, and Monroe, 19, were the first Salisbury firefighters since 1971 killed in the line of duty. Monroe and Isler became trapped inside the mill along with Capt. Rick Barkley, who was burned while in the building that day. A rescue crew was able to get to Barkley while a fire captain pulled Isler out. Monroe’s body was recovered later.
Monroe, who became a junior firefighter at age 14, was a member of the Salisbury City Fire Department, a volunteer with the Spencer Fire Department and a lieutenant with Millers Ferry Fire Department.
Isler had already been an accomplished firefighter in New York, where he’d also been a medic. After the events of Sept. 11, he wanted to rejoin, but was beyond the age limit to participate. Undaunted, Isler moved to North Carolina where he attended rookie school at Rowan-Cabarrus Community College.
Every day is hard for the families left behind, but they say it’s important for them to pay tribute to Isler and Monroe and honor those who continue in service.
The memorial was originally scheduled to take place March 7 — the anniversary of the fatal fire — but it was postponed due to weather. Some people showed up anyway despite the freezing cold and rain. Fire Chief Bob Parnell said about 25 firefighters gathered that day.
He said the men prayed together, consoled one another and spent time remembering the two who were like family to them.
Parnell said he could imagine Isler and Monroe looking down from heaven, thinking the men were foolish to meet in the bitter cold, but he said it was an example of the “best way we can honor them with vigor and passion.”
He said the two are still in the hearts of fellow firefighters. Parnell said being a firefighter is not for the faint of heart. Firefighters, as well as other responders, rush into situations when most people would run out. Some firefighters have even performed under unexpected circumstances, like the time Monroe delivered a baby.
“I don’t know if he knew where babies came from,” Parnell said with a smile.
The audience, which included Lisa Monroe, Justin’s mother, all laughed.
Lisa Monroe said it was kind of bittersweet being at the ceremony among the men and women her son served alongside.
“I thank everybody that came to support both families,” she said, wiping away tears.
Last year was the first time she attended the ceremony without her husband, Eddie, who died in 2012. She attended the ceremony this year with other family members. As she turned to greet strangers and friends alike, her eyes locked onto 6-year-old Nicholas Damato, son of firefighter Christopher Damato.
The elder Damato was Isler’s best friend. He moved to Salisbury after creating relationships with the people he’d met while attending various tributes and memorial services for his childhood friend.
Lisa Monroe gave the energetic boy a hug and commented on how big he’d gotten. Nicholas was born just 24 hours after Victor’s death. Damato and his wife, Kelly, gave their son the middle name Victor as way to honor his memory.
“He’s my brother, my family,” Damato said.
He added it was important to attend to honor both his friend and Justin Monroe.
His oldest son, also named Christopher, recalled going on fishing trips with “Uncle Victor.” Sometimes they didn’t catch what they intended, but the trips were always fun, the 13-year-old said.
Fishing and hunting are what family friend Wayne Rainey says he remembers about Justin Monroe. The teen enjoyed a good hunting and fishing trip. Rainey and his wife, Ann, say they attend the service every year.
“I think it’s a real good thing, but it’s sad to be here,” Rainey said.
He said a loss like this isn’t something that can just be placed aside.
“Everything you say or do, reminds you of him,” Rainey said.
Michael said he and his brother, Vic, were among those who responded following the terrorist attacks at the World Trade Center.
Through the years, Michael Isler returned for memorial services similar to this one and made connections with the firefighting community. A few years ago, he moved his family to North Carolina.
He said he and his family make sure they attend the service. It’s a reminder of the men and women who are putting their lives on the line, he said.
Michael Isler said his brother always loved the fire service.
“I was always a cop and he was always a firefighter,” he said.
“He was doing what he loved to do,” Isler added.
When others had gone inside for refreshments and coffee, Damato and his son, Christopher, took a moment when all was quiet to stand together at the memorial wall. Flowers had been placed at the base of the stone wall just below the names of Victor Isler and Justin Monroe.
Damato placed his hands on his son’s shoulders as the two read over the names as if committing the etchings to memory.
Contact reporter Shavonne Potts at 704-797-4253.