A final afternoon filled with obstacles 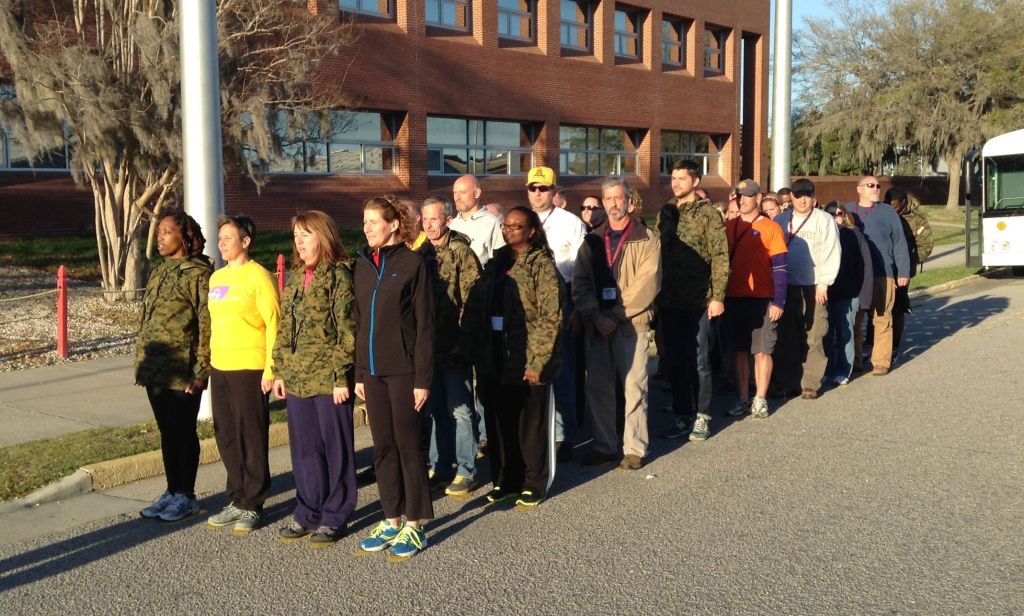 Editor’s note: David Freeze of Rowan County and several educators completed a week at Parris Island for a hands-on introduction to Marine boot camp. He filed this report Friday.

I will resume this column with activities of Thursday afternoon. The morning had been very busy, almost a day’s worth of activities alone that were already described in Friday’s column.
After lunch, we headed to a theater near Page Field, an old air base now used for the Crucible training. We saw a video detailing the 54-hour final test, where new recruits use the skills learned over the past 12 weeks. A recruit platoon leaves the main base on a 5-mile hike, employs teamwork and marksmanship amid sleep deprivation and hunger. Recruits get only eight hours of sleep and 21/2 meals over the 54 hours, before returning by a 9-mile hike. Once they return, recruits get unlimited food, including ice cream.
Following the video, the educator platoon visited some of the obstacles used in training for the Crucible. The first obstacle included a linear series of tires suspended by rope, offering a chance to swing from one to the other until reaching the end. The next obstacle involved various teamwork exercises using group thinking based on certain guidelines.
Our final obstacle was a four-story rappel tower. This was the highlight of the trip for many, and nearly everyone rappelled off the tower at least once. Some of the support Marines for the educator workshop also took a turn. We had a few minor mishaps, but none that couldn’t be quickly overcome. Climbing the steps to reach the top of the tower allows plenty of time for apprehension.
Waiting for those ahead of you in line, especially when they are having trouble, can add more. But eventually comes the moment that the participant is asked to keep his or her legs straight and just lean back. Leaning back over the wall from that height takes a little courage at first, as does trusting the experts who are guiding every step.
Our drill instructor told us that no one had ever fallen from the tower. Some probably thought it could still happen that day.
Many in the group were excited about a trip to the base exchange, and that is where we headed next. I was interested to see what was sold inside, but came out of the store thinking something much different than when I entered. The base exchange store seemed to have just about everything needed, but one section stood out. Immediately upon entering, you see a huge T-shirt section. I walked around and observed the many styles and slogans of U.S. Marines shirts. I realized that I couldn’t buy one. It just wouldn’t be right. I didn’t deserve it. To me, it seemed like it was only proper for a Marine or his family to wear such an honorable shirt.
The feeling was only enhanced when I walked into the uniform section, a place where current Marines actually buy their uniform parts. Nobody else can buy these uniforms, and nobody should be able to. The brave men and women who earned the uniform have set themselves on a lofty plateau.
One of the educators and I discussed just how our lives would have been different had we been able to serve. That is a question for much thoughtful consideration.
The educator platoon then headed for our final event of the evening. Many of the parents and families on hand for graduation were eating together at the Family Day Dinner. It was a chance for the families of the young recruits to meet their drill instructors plus other support personnel and officers who work throughout the base. There was at least one active Marine at each table, and both Chief of Staff Col. Grabowski and Gen. Reynolds briefly and eloquently addressed the crowd.
Richard Taylor and I ate at a table with Master Sgt. Lanham. It was our pleasure to enjoy a very pleasant conversation with him, although I had talked with him multiple times during the week. Many of us met Reynolds on the way out. We have learned a little about her rise to her current position as she has shared thoughts about her own service. She is a very gifted public speaker and it was wonderful to have so many opportunities to hear her talk. Besides that, don’t forget that I said that she led the motivational run for the graduating recruits early that same morning.
This was our last full day at Parris Island. It has been a tremendous opportunity to see the Marine Corps up close. It makes me realize even more how much all Americans owe to the brave men and women of our armed services.
In Sunday’s edition, I will tell about our final time on the base, including the graduation ceremonies for 381 new Marines. I will also recap lessons learned and give a few final thoughts concerning one of the best and most rewarding weeks of my life.