Rider transit in Cabarrus will have new hybrid buses 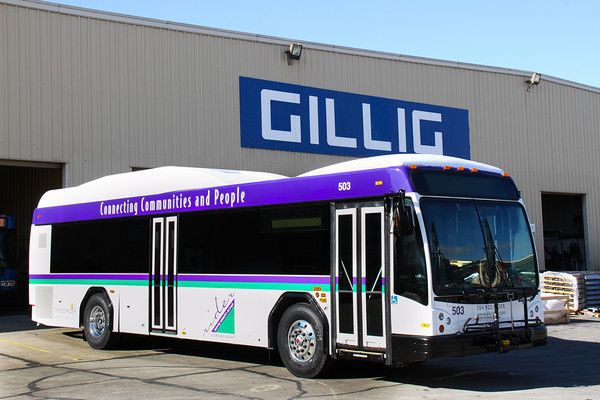 The Rider transit service in Concord and Kannapolis will have eight new diesel-electric hybrid buses in service by late April. The new buses will reduce emissions and save money on fuel and maintenance.
Manufacturers indicate that emissions could be reduced by 25 percent to 35 percent, compared to conventional diesel-powered buses, according to L.J. Weslowski, Rider transit manager. Since the fleet uses biodiesel, that will also help reduce emissions.
“The more stop-and-go traffic, the more efficient the hybrid is because it is using the battery system more,” he says.
The amount of fuel savings varies, Weslowski says, depending on whether the operating environment is urban or rural. “It ranges from 8-10 percent up to 40 percent. We’re looking forward to getting all eight buses out on the road, giving them six months to run and then determining their average fuel consumption, compared to the six months before we used the hybrids.”
Weslowski anticipates a fuel savings of about $40,000-$50,000 per year. “If the fuel costs were to increase like they have over the last five years, then the savings will be greater.”
The Rider system has a total of 10 32-passenger buses in its fleet. The hybrids will replace diesel buses that were purchased in 2004. Two conventional buses, purchased in 2008, will continue to operate. The first hybrid bus will be in operation this week. Others will follow at 7- to 10-day intervals.
The $4.9 million cost of the new hybrid buses was paid for mostly with federal funds. In fact, nearly $4.15 million came from federal sources. An additional $140,000 came from the state, and the remaining $709,660 came from the cities of Concord and Kannapolis.
Another benefit from using hybrids is reduced maintenance. “Part of the battery regeneration comes from the braking system,” Weslowski says, “so there’s a reduction in the amount of brake pad wear.”
That reduction also means less brake dust gets into the environment. The dust — small particulate matter — can create serious health problems, including heart and lung diseases.
The hybrid’s engine is smaller so it’s less expensive to replace. In addition, a hybrid cooling system does not use the hydraulic fluid and big fans associated with a traditional radiator system. “We have an all-electric cooling fan system that has individual mini-fans that operate only when they are needed,” he says. “It makes for a quieter ride for the passengers and a quieter ride as we go though the community.”
As ridership has increased to more than 440,000 passengers a year, the demand for more bus shelters has also increased. “When I started with the city three years ago, we had 10 bus shelters,” Weslowski says. “We ordered 10 more with solar lighting and most of those have been installed over the last year.”
An additional 40 solar-powered shelters will arrive in the early summer. The transit system expects to install 30-35 of the new shelters, leaving a small inventory to be used later.
The cost of the solar component has come down significantly in the past 10 years and the technology has gotten better, according to Weslowski.
“There is a significant cost savings that comes from not having to install the infrastructure for lights that are tied into the electrical grid,” he says. “In some cases, cost aside, conventional hard wiring wouldn’t be a viable option in some locations, and the solar option helps address both of these challenges while providing a better passenger experience.”