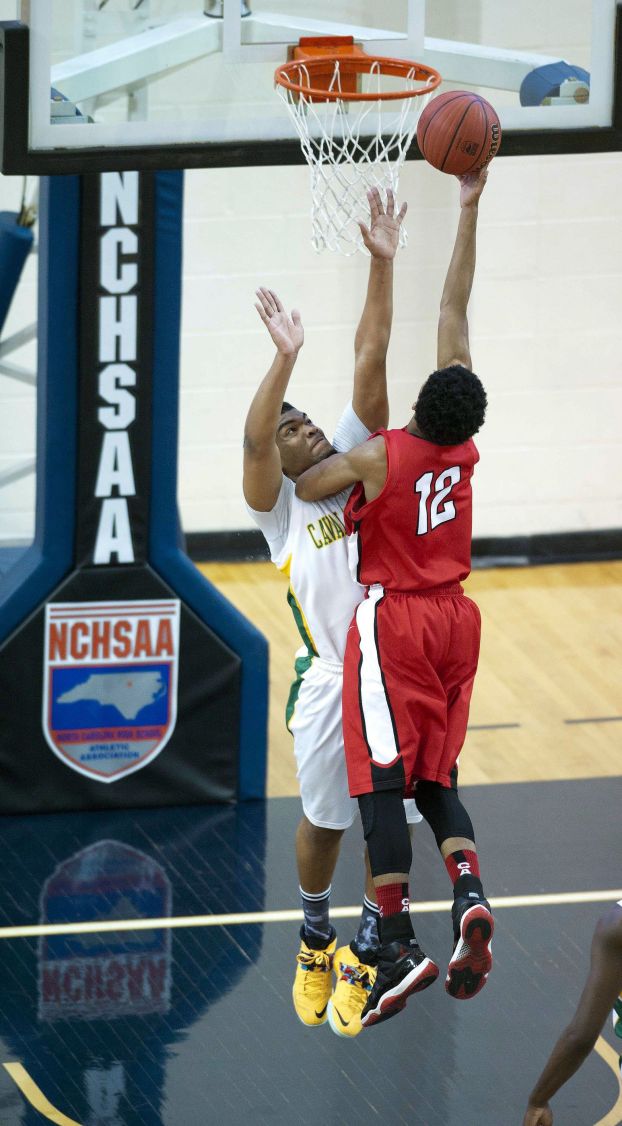 GREENSBORO — North Rowan only led for 22 seconds of Saturday’s 2A West Regional semifinal against East Rutherford.
But the Cavaliers made them count.
North scored four points in a final 22-second blur to pull ahead and stun a powerful East side, 58-55, to stay alive in the state playoffs.
“We always believed that we had a chance,” an exhausted North coach Andrew Mitchell said afterwards.
“I’m not just saying that,” as he put his arms around do-everything trio Michael Connor, Jalen Sanders and Michael Bowman. “These three guys give me great confidence. I know at some point they are going to pick it up and do the right thing.
“It’s better to lead late than never.”
And North couldn’t have waited any longer to fight all the way back after a slow start.
Kenyon Tatum cut the deficit to one at 55-54 on a putback with 41 seconds remaining. Needing to stop the clock, North fouled, sending Travis Waldroup-Rodriguez — an 86 percent free throw shooter — to the line.
He missed the front-end of a 1-and-1, setting up the Cavs’ go-ahead basket.
Bowman brought the ball up the court and saw he had room to work 1-on-1. He dribbled right, spun around a defender and hit a floater to give North its first lead of the game, 56-55.
“I looked down and everybody went to the baseline,” he explained. “Once I saw that, I told myself ‘hey, big-time players step up, so I got to do what I do.’ I got to the rack, got the spin and looked at the basket and knew that was going in.”
East brought it back up the floor looking to answer when Sanders made the biggest play of a stellar performance, stealing a pass near midcourt and beating the defense to the rim to push the lead out to three.
“I saw No. 13 [Waldroup-Rodriguez] coming down the court and he was out of control,” he replayed. “I saw him leave his feet and I knew he was trying to get it back into No. 12’s [Devonte Boykins] hands. So I just jumped in front of the pass.”
East fired up two good looks from beyond the arc in the final seconds but neither fell as North celebrated another improbable, come-from-behind victory.
“Sometimes you go up 15 or 16 points and you end up losing. So I would rather be behind the whole game and take the lead in the last 20 seconds,” Mitchell said. “We’ve always believed. I know it sounds kind of cliché but God has been really good to us. We’ve been through some stings this year, even in the playoffs, and had some obstacles that we couldn’t handle by ourselves.”
The thrilling ending was a complete juxtaposition of an ugly start for the Cavaliers, who had more turnovers (four) than made field goals (two) in a six-point first quarter.
East shut down the high-scoring Cavs, holding them to 25 percent shooting (6-of-24) in the first half and jumped out to a 26-19 lead the break.
North got into serious foul trouble in the early going with 12 total fouls as Sanders and Bowman each picked up three quick fouls.
“We didn’t do anything special,” East head coach Brad LeVine said afterwards. “We just played really hard defense.”
But coming out the break, North finally found its stroke, led by senior slasher Michael Connor.
“Coach asked me at halftime if I wanted this to be my last high school game — I told him no,” he said. “I had to go out there and step up.”
After blowing up in the second half against Salisbury, East Lincoln and Shelby already this postseason, everyone braced for another second-half outburst.
Despite being held scoreless in the first half, Connor came out on a mission, converting a three-point play less than a minute in for his first points. He followed with a fastbreak layup to give the Cavalier bench some life.
“I just have to thank my teammates. They tend to let me shoot the ball,” he said. “In the first half, I couldn’t hit anything. Coach told me to be patient and let it come to me and not force it.”
Connor finished with a dozen points in an explosive third-quarter as North cut the deficit down to three (40-37) going to the fourth.
The Cavs kept it close behind their ‘Big Three’ until finally pulling ahead in the final 22 seconds.
“I have to thank God,” Connor explained. “Even though I had a bad first half, I told myself that ‘God is good. He may not come when you want him to come, but He will come. And He came with 20 seconds left.”
Connor recorded a game-high 22 points, while Sanders added 16 points, eight rebounds and three steals. Bowman finished with a double-double (11 points, 10 boards) with three steals of his own as the trio combined for 49 of North’s 58 points.
The Cavaliers’ gauntlet of a playoff bracket continues today in the regional final against unbeaten Smoky Mountain.
“They move the ball, they’re fast and play hard. When their fans scream, it sounds like a shotgun just went off,” Mitchell said. “It’s going to be intense and loud. We’re excited and looking forward to it. They’re undefeated and I understand why.”
Tip-off is slated for 2 p.m. from UNC Greensboro’s Fleming Gym.
EAST RUTHERFORD (55) — Boykins 18, Camp 12, Waldroup-Rodriguez 12, Jackson 5, McEntyre 4, Dawkins 4, Bristol, Carson.
NORTH ROWAN (58) — Connor 22, Sanders 16, Bowman 11, Tatum 6, Handy 3, Nelson, Archie, Walker, Scott.
E. Rutherford 12 14 14 15 — 55
N. Rowan 6 13 18 21 — 58