A day of celebration in China Grove 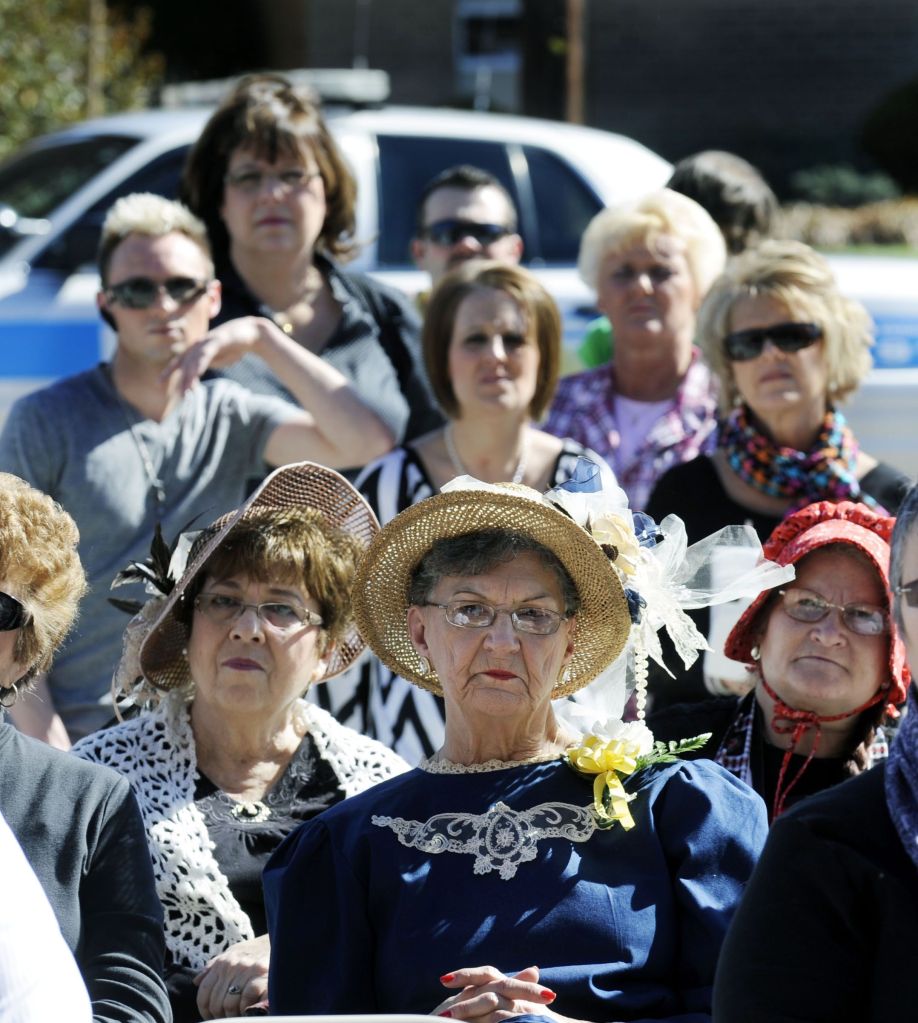 “Tie a yellow ribbon ’round the chinaberry tree,
China Grove is the town for me …”

By Susan Shinn
For the Salisbury Post
CHINA GROVE — With the sun shining brightly Saturday afternoon, flags snapped smartly and yellow ribbons fluttered in the breeze.
It was a great day to be in China Grove. It was a day of celebrations: the town’s 125th anniversary, the fire department’s 90th anniversary, the historical society’s 25th anniversary, and Encore on Main’s 10th anniversary.
Some 200 people attended opening ceremonies at the fire department, with more gathering to tour the roller mill, stroll downtown and take wagon rides. Gary’s Barbecue sponsored the rides, and owner Gary Ritchie was spotted cruising up and down Main Street as the horses clip-clopped along. Two chocolate brown Percherons from the Lazy 5 Ranch pulled a wagon that could easily hold a couple dozen folks.
South Rowan High School contributed a color guard, and Boy Scouts from Troop 375 of First United Methodist Church just up the street led the Pledge of Allegiance. The Carson High School Chorus, led by Megan Wyatt, sang a beautiful rendition of “America the Beautiful,” preceded by senior Kylie Kluttz with the National Anthem.
“The God who helped build this town is still building today,” said the Rev. Keith Copeland, who gave the invocation. “I pray we mark this moment, but we do not stop here.”
In his prayer, Copeland, interim pastor at St. Mark’s Lutheran Church, right across the street from the fire department, asked for blessings during the celebration. “Bless us that we may be a blessing for the next 125 years.”
Politicians were on hand to bring greetings and congratulations — and to politick. Rep. Carl Ford read a resolution from the N.C. General Assembly. Mayor Don Bringle read congratulatory notes from Rep. Gene McLaurin and Salisbury Mayor Paul Woodson. Fred Steen, legislative liaison for Gov. Pat McCrory, read a proclamation from the governor. Speakers were flanked by the national, state and China Grove Centennial flags.
Fire Chief Jeff Gledhill presented firefighters with service awards, and former chief Clyde Richards spoke briefly about the department’s history.
Mayor Pro Tem Lee Withers congratulated the staff of Embellish Boutique, which won the window display contest. Owner Lisa Deal has been in business on the square for the past eight months.
“We’ve just had a great experience,” she said.
Clint Abernathy sang a fine a cappella rendition of “Tie a Yellow Ribbon ’Round the Chinaberry Tree,” written by Tom and Carole Brooke for the town’s centennial in 1989.
Then the crowd was invited over to the roller mill for tours. The traditional music band MGMs played on the front porch, which was festooned with yellow ribbons.
Nearby, Becky Withers waited with her four granddaughters to ride on the wagon. She and her husband, Roger, have lived in China Grove as long as they’ve been married: 43 years.
“We just love it,” Withers said. “We just never wanted to leave. We wanted our children to grow up in a small town.”
The festivities wound down with a community wiener roast coordinated by Alan Goodman of Goodman Farm Supply. Barbara Doby presented Bringle with an “official wienie roast stick” made by Goodman. She told him he could put two hot dogs on it — it had two skewers — but then Bringle realized later he could load it up with three or four if he stacked them horizontally. He was happy about that.
It was a great day to be in China Grove.
Freelance writer Susan Shinn lives in Salisbury. She grew up in China Grove.