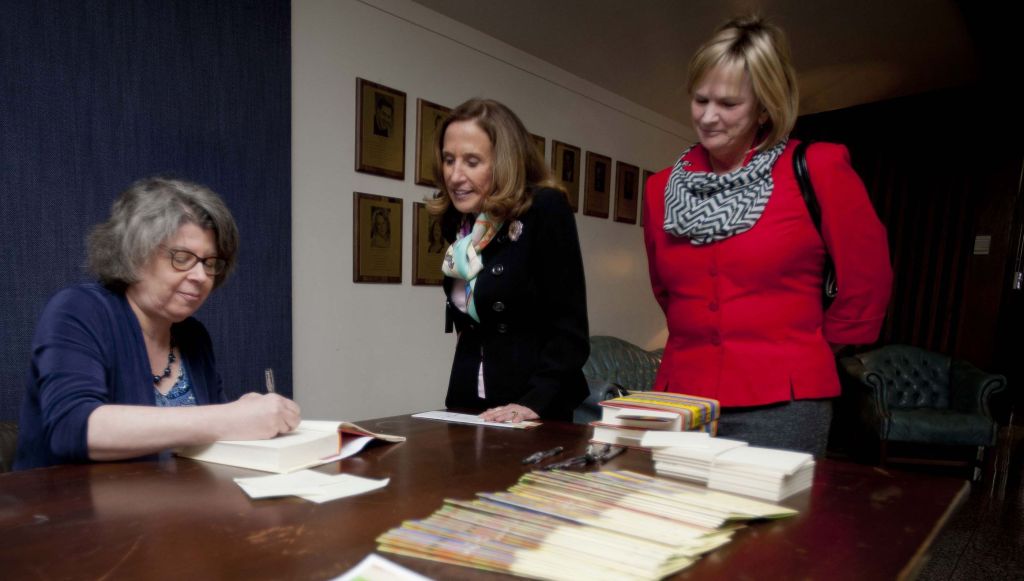 SALISBURY — Author and Catawba Professor Dr. Kurt Corriher said in his introduction of Meg Wolizer at the Brady Author’s Symposium reminded him of the late writer Tim McLaurin. The two couldn’t be more different — Wolitzer is a lifelong New Yorker, McLaurin was a backwoods character from North Carolina.
Corriher said he finally figured it out. Neither author is afraid of anything. Wolitzer, he said, is not afraid of naked honesty, sincerity or opening the lid of the soul to show we are not alone.
Wolitzer liked that, but she said, “I am afraid of so many things. But I’m not afraid of writing.” Her most recent book is “The Interestings” and she talked about that and more at the annual Catawba College event.
She said the worst question she gets is, “Would I have heard of you?” She names her novels; there’s no sign of recognition, and they say, “Oh, I only read thrillers.” The audience laughed.
“In a more just world you would have heard of me,” Wolitzer answers.
She believes writing, in the beginning, should be for pleasure only. She grew up in a small town on Long Island in New York and every Friday night, her family went to eat Chinese food, went to Baskin Robbins for ice cream and then went to the library. Because her mother was an author, the children were allowed to take as many books from the library as they wanted. “I felt very powerful with that huge stack of books. I wasn’t very discriminating, though.”
Her author mother did not discourage her writing, even as a child. Wolitzer told of a woman who asked her what to do about the woman’s daughter, who wanted to be a playwright. She wanted to know how to convince her to do something else, to discourage her from writing. Wolitzer asked if she was any good at it. The mother said she was. Wolitzer responded, “The world will whittle your daughter down, a mother should never do that.”
Wolitzer’s mother sold her first book while Wolitzer was in kindergarten. “It was the time of the woman’s movement and that gave her courage,” Wolitzer said. Wolitzer remembers going to school and seeing her mother in a bathrobe and fuzzy slippers, then coming home after school and seeing her mother in a bathrobe and fuzzy slippers. She was writing all day.
A writer just has to do it. Everyone has bad days. “You make a life as a writer day-by-day or hour-by-hour. It’s doable.”
“I think the desire for a story is hard-wired into us,” Wolitzer said. When kids were shown pictures of amoebas, they began to tell stories: This is the Mommy and that one looks sad.
Now there are true and untrue stories — with a recent shift to true stories, Wolitzer believes, because there’s so much anxiety now. People like to know what’s going on around them. That explains the popularity of such books as “The Kite Runner,” which takes place in Afghanistan. Fiction can create a culture of empathy, Wolitzer said. “And we need more of that.”
The author Mary Gordon, one of Wolitzer’s favorites, advises people to write about what’s important — to you. “How do you find that? Think about those books you don’t put down. That writer wrote about something important.”
“You have so little time as a writer to grab the reader” but Wolitzer doesn’t like a neat hook. She looks for a voice, a sensibility, a way in the world. “The books you put back on the shelf don’t have that voice.”
Wolitzer, much like the character of Jules in “The Interestings” is funny, but she doesn’t set out to write funny. “You feel set up for a joke sometimes.” Things can be funny, and that enriches the book, makes it feel like a slice of life. “In this country, people want writers to be serious in the book and funny in person.” People who write funny are afraid they won’t be taken seriously.
Wolitzer talked about the cover of her book, with her name in bold type and a series of brightly colored stripes across the cover. “You know, you see books and you see a lot of women in water, girls in fields. It’s hard to picture a man carrying a book with a cover of a girl in a field of wheat.”
Wolitzer’s cover is more ambiguous, neither masculine nor feminine. Cover art has become an issue for authors. Male authors sell more books, but the majority of fiction readers are women. The whole issue of how literary fiction by women is treated vs. that of men deeply interests Wolitzer.
But the coolest thing is the new “The Interestings” tote bags with the cover design, coinciding with the release of the paperback. “How about ‘A Farewell to Arms’ on a fanny pack? I think not.”
Wolitzer did, indeed, go to an artsy summer camp in 1974. She lived in the suburbs and the people she met there were all from the city, just like the group in “The Interestings.” They lived in teepees designed by a famous architect. “It changed my life. … It’s the time of life when you find your cohort. That often happens in adolescence, which is a time of firsts.
“While I was there, I came to life. I was into acting, but not very good. I used this fake actor voice,” she said, imitating the tone. At camp, Wolitzer was so happy she’d lie awake at night, “vibrating with happiness.” She met her best friend, who looks just like the character Ash at that camp. But that’s as far as it goes. “I don’t believe in writing about people you know. I don’t want to hurt them, and you have to take risks.”
Her newest risk in a young adult novel, “Belzhar” (a play on “The Bell Jar” by Sylvia Plath) that takes place at a therapeutic boarding school and is sure to be full of interesting characters.