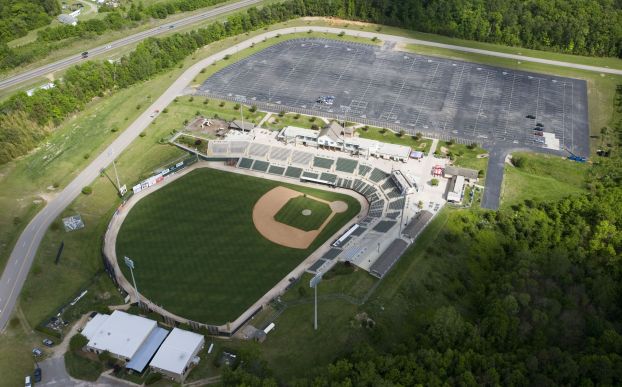 CHINA GROVE — At its annual planning retreat at Pity’s Sake Lodge, the Kannapolis City Council began a conversation that could culminate in a new baseball stadium for the downtown.
City Manager Mike Legg told council that the current stadium was constructed in 1995 through a partnership with Rowan County. In August 2011, the city gained sole ownership. When the lease was signed between the city and Smith Family Baseball, which owns the Kannapolis Intimidators, it was agreed that a dialogue would begin within a few years regarding the future of the relationship between the two entities.
The time has come to start that dialogue, Legg said. In the next year, city council will consider three options: do nothing, upgrade the current stadium, or move the stadium.
The current location at I-85 and Lane Street has advantages and disadvantages, Legg noted. “It’s at the outer reaches of our market. It’s an aging stadium with significant issues. If the team’s going to be more profitable, then they’re more likely to participate in any solutions we have.”
That being said, the team owners are businesspeople who have to make tough decisions if faced the possibility of no growth, Legg said.
Legg called the relocation a radical step. But he and city leaders agree that a new stadium would mean more than baseball. It would be an entertainment complex, he said, and it would be a tool for economic development in revitalizing the downtown. Legg said that either renovations or construction on a new stadium must be undertaken within the next four to five years.
Scott Mingonet with Kimley-Horne and Associates presented a site feasibility study, with several options for the location of a stadium at the old Post Office site. The 7-acre property sits at the corner of Dale Earnhardt Boulevard and Vance Street. It is city-owned property.
“There are options,” Mingonet said. “You have great bones. You’ve got great structure in downtown.”
The stadium would serve as an anchor to downtown, with the N.C. Research Campus serving as the other bookend. The stadium could feature a concourse entry, with the field built about 15 feet below, taking advantage of the slope of the site.
The stadium could seat between 3,500 to 4,000 people — about twice that for concerts. The property could include a mix of retail space, multifamily housing, and even serve as a new location for the North Carolina Music Hall of Fame.
“There’s enough mixed-use potential for it to be a 24/7, 365 (days a year) facility,” Mingonet said.
Echoing Legg’s earlier comments, Mingonet said the ballpark wouldn’t be just a ballpark — it could be used for opera simulcasts, concerts, weddings, Scout camping, galas and more. “Correctly designed, they become a community catalyst.”
Although council members expressed concern about stadium parking — or lack thereof, Mingonet said the new baseball stadium in Charlotte was built without a single parking place. He said that there was parking available all over downtown. Having fans park and walk is another way to draw folks through the downtown, he noted.
There was no action taken on the stadium, but Legg noted a possible relocation would be a multiyear project, with feasibility and economic studies conducted at the outset.
Although no price tag whatsoever was discussed, a stadium that size would cost no more than $25 million, Legg said. Council members batted around ideas on how they would pay for a new stadium. As the first item on the agenda Thursday morning, council discussed its 10-year financial plan and Capital Improvement Program (CIP). Eric Davis, the city’s finance director, told council that the city is in good financial shape, with a recently improved bond rating of AA-minus. That improved rating means the city can save money on loans when it undertakes projects.
Legg noted that some $9 million was already appropriated for stadium property. “So right on the surface, we have 35-40 percent we can already account for without a whole lot of impact (to the CIP).”
Additionally, Davis said, there is $2 million slated for stadium repairs. “We’re kind of at a crossroads. There are ways we can work hard to find a way to get it done.”
Councilman Ryan Dayvault characterized such a project as one of the “big ideas you have to start with” to address the question from constituents to council: “What are you going to do with the downtown?”
Such a move would also create a buzz and generate more ticket sales — something each entity wants — with a projected 120,000 visitors per year coming downtown to games.
Those numbers appealed to council.
“What else can we do to bring in 120,000 people to the downtown?” Councilman Doug Wilson asked.

FRAMINGHAM, Mass. (AP) Staples will close up to 225 stores in North America by the end of next year as... read more