Gaul to run for Carson-Newman 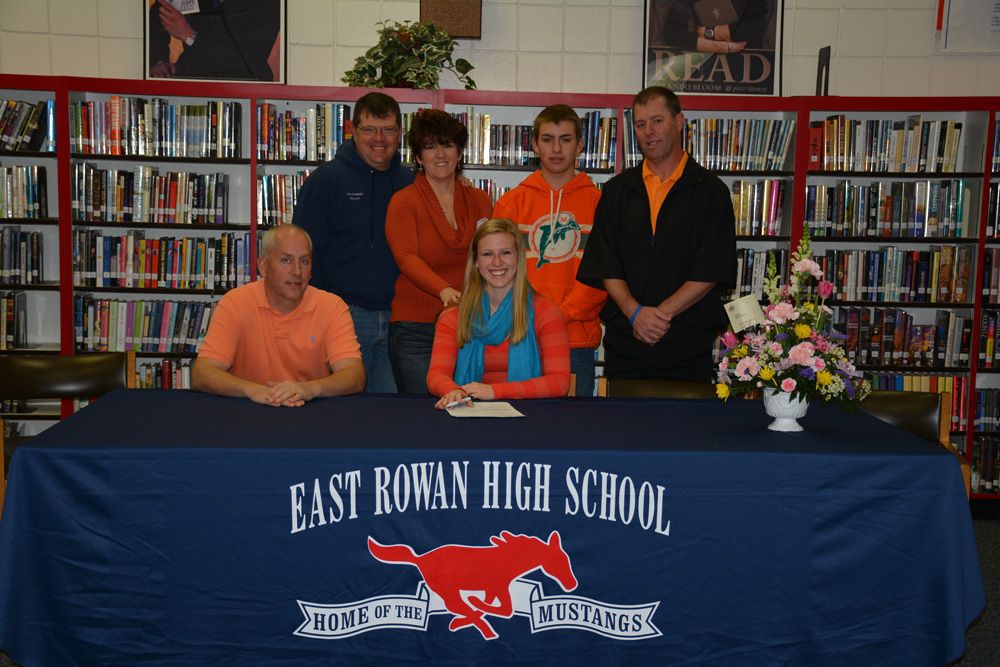 GRANITE QUARRY — East Rowan senior Tori Gaul has competed in five different sports at the varsity level, and that’s only counting indoor and outdoor track once.
“I’ve done about everything — tennis, swimming, track, cross country and softball, you name it,” Gaul said with a chuckle. “But I really wasn’t very good at tennis.”
OK, tennis didn’t go all that smoothly when she was a freshman at Mount Pleasant. Still, that long list of sports gives you an idea how good an athlete Gaul is.
She’ll focus on two sports at Carson-Newman. She signed with the Eagles’ cross country program recently and since the Eagles have a track and field team, she’ll also try that. She thinks steeplechase, a 3K event, which combines endurance with athletic jumps, might be right up her alley.
Gaul wasn’t college material in cross country until she transferred to East prior to her junior season.
She’d been running times in the 24s at Mount Pleasant, but East coach Jon Heidrick helped her mental approach and boosted her desire to compete at a high level. It also helped that Gaul had a talented teammate in Faith Blume. Gaul has chased Blume across a lot of finish lines.
“Faith always wants to win, and that’s been good for me,” Gaul said. “We’ve been able to compete with each other and really push each other and still be teammates and friends.”
Heidrick was the key factor as Gaul’s cross country times started dropping.
“Coach Heidrick was the most influential person as far as me signing a cross country scholarship,” Gaul said. “Cross country hadn’t good for me at Mount Pleasant, but when I got to East, I decided to try it again. Coach Heidrick was always very positive, and that’s why my times improved so much. I cut three minutes as a junior.”
Gaul has been very busy the last calendar year.
She’s known best for softball, as she was the starting catcher for the Mustangs last spring. Besides playing a challenging defensive position, Gaul produced clutch hits in the postseason, including two triples.
“I’ve played softball since I was 8, and it’s been a big part of my life, but last year was the most success I’ve had,” Gaul said. “I think I improved a lot by working extra hours after practice with (assistant) Brian Poole and (pitcher) Sydney Poole. I never expected to be all-conference or all-county or anything like that, so it was an amazing year.”
Gaul isn’t competing in softball this spring. She’ll run track as preparation for Carson-Newman. She’s competing for East’s outdoor track squad for the first time and likely will be on the 4×400 relay team and in the hurdles.
Gaul has speed as well as stamina and competed in indoor track as a junior, running 300s and 1600s.
Last fall, Gaul ran her final season of cross country. She was all-county and All-SPC as a senior and ran a personal best of 20:55 in the 3A Midwest Regional at Charlotte’s McAlpine Park where she was four places and eight seconds behind Blume.
“There were several Division II schools that had some interest, and Carson-Newman really wasn’t on my list of college choices at first,” Gaul said. “But they emailed me and wanted me to visit, and when I got there, I loved it.”
While Gaul is doing track now, she’s also just coming off another sport.
She swam with teammates Emma Ritchie, Hailey Bartleson and Brooke Waller on East’s 200 freestyle relay team that competed in the 3A state championships.
Gaul apparently can be good at just about anything she sets her mind to — on land or water.
Gaul is impressed with Carson-Newman’s cross country coach, Tony Parilla. He was a 1996 Olympian and a perennial NCAA champion in the 800 meters when he competed for Tennessee.
Gaul, who is in top 10 percent of her class at East, wants to go into the medical field. Specifically, she wants to be a plastic surgeon. She did her senior project presentation on plastic surgery.
“Carson-Newman has a very good medical program, and that was important to me,” Gaul said. “The ultimate goal is to become a plastic surgeon and have my own practice. They do make a lot of money, but mostly I’d like to be able to help people that need cosmetic surgery — like burn victims. I’d volunteer to help people. I’d like to make a difference.”