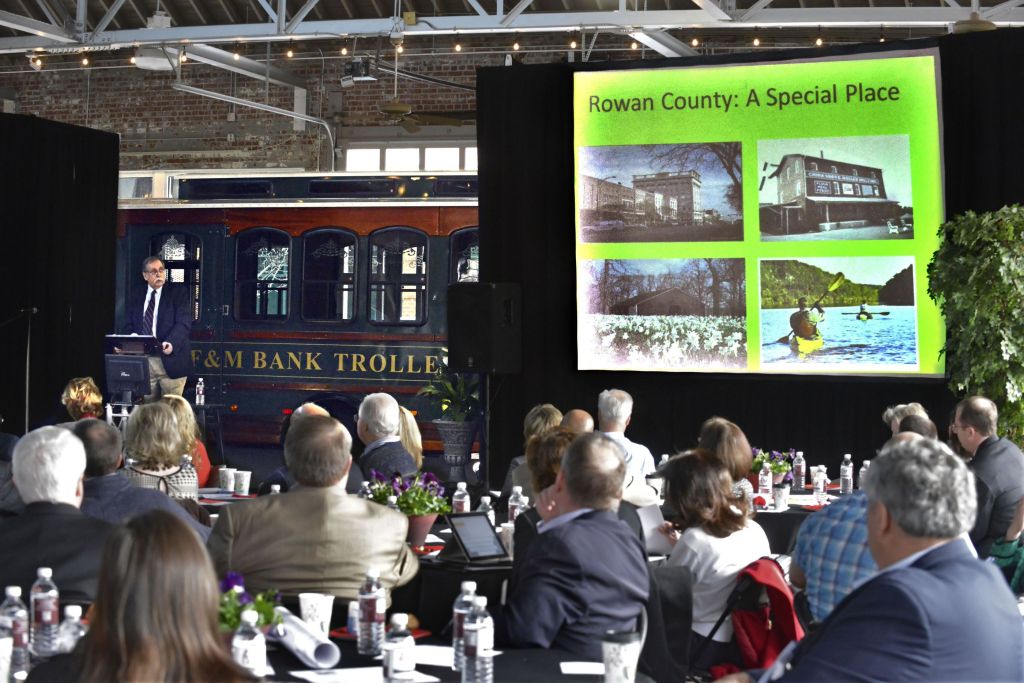 SALISBURY — To lure jobs and investment, community leaders once focused on what they didn’t have.
“It was all about smokestack chasing,” Ed McMahon said at Thursday’s Rowan County forum.
That model does not work today, McMahon said. Now, economic development works best when leaders and residents come together to identify assets they already have and enhance them, coming up with a shared vision that incorporates character, environment and economics, he said.
“Cooperation is pretty darn important,” said McMahon, an attorney, land use planner and senior resident fellow at the Urban Land Institute in Washington, D.C.
More than 200 people from across Rowan cooperated all day at the “Building Successful Communities” event at the F&M Trolley Barn. During small group work sessions, they came up with 110 community assets, 102 ideas to start working on and 64 things the community should stop doing.
Participants will vote electronically next week on the top assets and initiatives for attracting new jobs and investment to Rowan. The Gateway Building partners — Chamber of Commerce, Economic Development Commission, Convention & Visitors Bureau, Downtown Salisbury Inc. and the LandTrust for Central North Carolina — organized the event and will hold future meetings to continue the visioning process.
Rowan is already special, McMahon said.
“You have the opportunity to go from good to great,” he said. “If I come back here in five years, this will be a very different place.”
Many communities in America spend too much time fighting and not enough time talking about what they want to cherish, preserve and protect for their children and grandchildren, which usually ends up being the same things, McMahon said.
“I hope the county and county seat will work more closely together and all towns will work together to make a whole that is bigger than its parts,” he said.
During a break, McMahon said he was aware of the longstanding feud between Salisbury and Rowan County. His advice: elected officials from both camps should eat breakfast together once a month, for as long as it takes to work out their differences and find common ground.
“Communities that embrace the future will prosper,” he said. “Those that do not will decline.”
The top economic development strategy for infrastructure used to be widening roads. Today, a community’s most important investment in infrastructure is education, McMahon said
Investing in downtown is also crucial, he said, displaying the cover of a magazine for industrial park developers.
“When site searching the South, make sure you inspect a community’s downtown first,” it read.
Even industrial park developers want to check out the downtown before choosing a city, McMahon said.
“They know if you don’t have a healthy downtown, you don’t have a healthy town,” he said.
McMahon provided many examples of cities large and small that turned an existing asset into an economic engine, reaping rewards many times greater than the initial investment — cities that have turned abandoned textile mills into thriving mixed use developments or built a $20 million walking trail along a river that led to $1 billion in private investment.
Paducah, Ky., turned flood walls into art galleries and sold houses for $1 to artists who promised to restore them, creating $150 million in new investment.
Greenville, S.C., removed a highway that ran over Reedy Falls and restored the waterway, spurring millions of dollars in investment and creating one of the most vibrant downtowns in the South.
Even rural Potter County, Pa., used a hidden asset to turn the small community into a destination. Leaders discovered that at night, the county is the darkest place in the eastern United States.
They created the country’s No. 1 dark skies park, which lures thousands of astronomers every year and with them, new businesses, restaurants and inns.
“Focus on what you already have instead of what you don’t have,” McMahon said.
The collaborative process that can lead to a new future for Rowan County should be driven by community vision, not market forces, he said.
Tourism will play a vital role, McMahon said, and creating a sense of place with gateways, public art and land preservation is not just about beautification but economics.
“The image of a community is fundamentally important to its economic well-being,” he said.
Tourists wants to visit places that are different, unique and unusual. He urged people to protect Rowan’s rural landscapes and keep the county’s farming and agricultural traditions strong.
Preserving historic buildings, neighborhoods and landscapes is like saving a community’s “heart and soul,” McMahon said.
“These are the places that physically connect us to the past,” he said. “These are the places that tell us who we are and where we came from.”
And there’s a bonus that comes with preservation, McMahon said. The more a community does to enhance its uniqueness, the more people want to go there.
He warned that pessimists will try to stand in the way of vision and progress but encouraged participants to continue moving forward.
“No is a powerful word in America,” McMahon said. “But I will tell you a more powerful word — yes.”
Contact reporter Emily Ford at 704-797-4264.