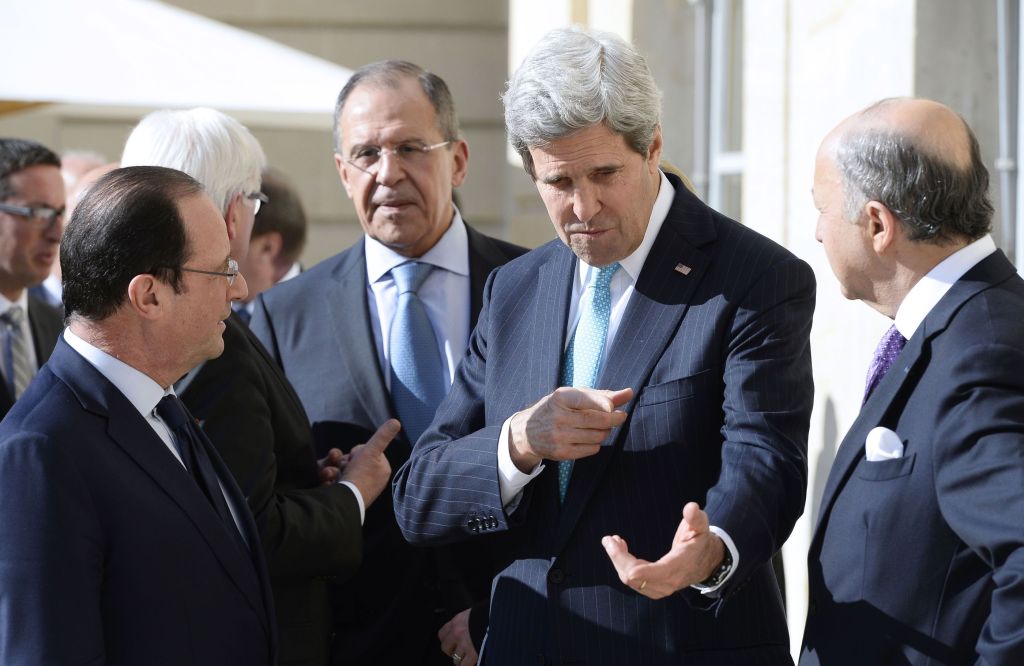 PARIS (AP) — The United States and Western diplomats failed to bring Russian and Ukrainian foreign ministers together Wednesday for face-to-face talks on the confrontation in Crimea, even as U.S. Secretary of State John Kerry voiced optimism that an exit strategy was possible. “I’d rather be where we are today than where we were yesterday,” he said.
The flurry of diplomatic activity came as NATO punished Russia by suspending military cooperation, and the European Union extended $15 billion in aid to Ukraine, matching the amount the country’s fugitive president accepted from Moscow to turn his back on an EU trade accord.
After an intense round of diplomacy with Russian Foreign Minister Sergey Lavrov and several European counterparts in Paris, Kerry said the meetings were “very constructive, without promising something that is not defined yet, without raising hopes that are inappropriate to raise.”
“I want to be realistic. This is hard, tough stuff, and a very serious moment,” Kerry said. “I personally feel that I have something concrete to take back and talk to President Obama about,” he added, without specifying what that was.
Speaking separately after what he called “a very long day” of discussions on Ukraine, Lavrov said the sides agreed to continue talks in coming days “about how we can help in efforts to normalize the situation and overcome the crisis.”
Still, there was no direct meeting between Lavrov and his Ukrainian counterpart, Andriy Deshchytsia, though the Ukrainian foreign minister said Kerry asked him to delay his flight home in hopes of getting the two to sit down together.
In an interview with The Associated Press, Deshchytsia said he had hoped to brief Lavrov on a Ukrainian plan to offer Crimea more autonomy while still claiming it within the country’s borders. Any vote taken toward autonomy would require international observers to replace armed groups in order to work, he said.
“Our position is to use all the peaceful means, all the diplomatic ways to settle the issue without victims and tragedy — and without taking territory away,” Deshchytsia said. “We don’t want war with Russia.”
But Lavrov was not ready to meet.
Leaving the French Foreign Ministry, he was asked by reporters if he had met with his Ukrainian counterpart. “Who is it?” Lavrov answered. “I didn’t see anybody.”
At a news conference at the U.S. ambassador’s residence, Kerry played down the failure, saying there had been “zero expectation” of that, though U.S. officials said that is still the goal.
Kerry also repeated the West’s demand that Russia pull its forces from the Crimean Peninsula, saying “Russia’s violation of Ukraine’s sovereignty and territorial integrity has actually united the world in support of the Ukrainian people.”
On the ground in Ukraine, meanwhile, volatility reigned. A special U.N. envoy visiting Crimea came under threat by armed men who forced him to leave the region. And hundreds of demonstrators — many chanting “Russia! Russia!” — stormed a government building in eastern Ukraine, spreading concern that turmoil could engulf other Russian-dominated parts of Ukraine.
Ukraine’s prime minister told the AP in his first interview since taking office that he still feared Russian President Vladimir Putin might attempt more land grabs: “Mr. President,” Arseniy Yatsenyuk said, “stop this mess.”
But most of the bargaining chips belonged to Russia, whose troops are fanned out across Crimea and control most of its strategic facilities.
Lavrov, speaking in Spain before meeting with Kerry, warned against Western support of what Moscow views as a coup in Ukraine, saying that could encourage government takeovers elsewhere.
“We must understand that a bad example is infectious,” he said.
While Russia expressed openness to international mediation, a major sticking point has been Moscow’s refusal to recognize Ukraine’s new leaders much less sit down at the table with them.
NATO tried to apply pressure on Moscow in its own talks with Russia in Brussels.
The alliance’s secretary-general, Anders Fogh Rasmussen, said ambassadors for the 28 member states decided after a meeting with their Russian counterpart to suspend plans for a joint mission as well as all civilian and military meetings.
Rasmussen said that because of Russia’s military action in the Crimean Peninsula, “the entire range of NATO-Russia cooperation (is) under review.” Rasmussen said NATO will continue to meet with Moscow at the political level but insisted that halting all other cooperation “sends a very clear message to Russia.”
One key piece of leverage that the West has over nearly bankrupt Ukraine: hard cash. The three months of protests that triggered Ukraine’s crisis erupted when President Viktor Yanukovych accepted $15 billion in aid from Putin in exchange for dropping an economic partnership deal with the EU. On Wednesday, the EU matched the aid — which the Russians withdrew after Yanukovych’s downfall — and the U.S. topped that up with an additional $1 billion.
Meanwhile, Ukraine’s former prime minister — the heroine of Ukraine’s 2004-2005 Orange Revolution and Yanukovych’s arch-enemy — called on the West to force Russia to withdraw troops from Crimea.
Yulia Tymoshenko, who was released from prison two weeks ago, said any negotiations about Ukraine’s future should be conducted directly between the U.S., the EU and Russia — and insisted no compromises should be made to appease Moscow.
“We believe that the aggressor must leave without any conditions,” Tymoshenko told the AP in an interview.
The EU on Wednesday also froze the assets of 18 people held responsible for misappropriating state funds in Ukraine, echoing similar action in Switzerland and Austria.
Russia has suggested that it will meet any sanctions imposed by Western governments with a tough response, and Putin has warned that those measures could incur serious “mutual damage.”