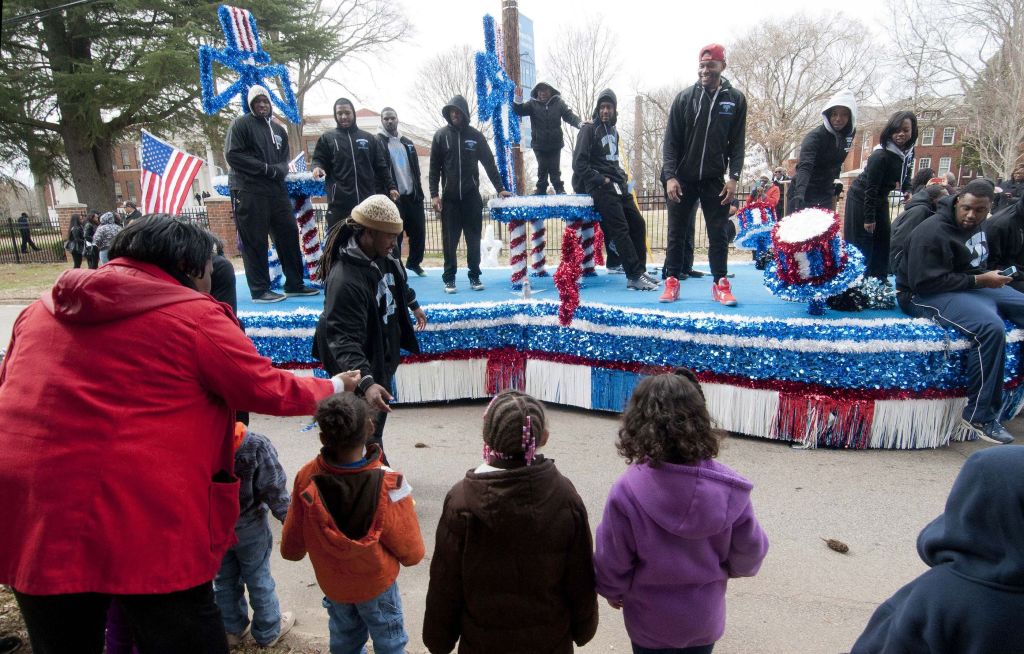 Pride was a consistent theme among those who lined Monroe Street near Livingstone College to cheer on the CIAA men’s basketball champions Wednesday.
They cheered as a parade featuring the Livingstone Blue Bears, their coach, the athletic director, the pep band, cheerleaders, school officials, area law enforcement and even the mayor moved down the street.
The parade began at Soldiers Memorial AME Zion Church on North Church Street and moved through downtown to the Livingstone campus. Afterward, there was a celebration and barbecue inside Trent Gymnasium.
As students gathered outside the school’s gates waiting for the parade to arrive, a campus security car drove up and down the street, leading bystanders in cheers.
“Who ya with?” the officer would yell over the loud speaker.
“L.C.!” the crowd responded.
The Blue Bears defeated Winston-Salem State University 83-68 Saturday to clench the CIAA tournament championship at Time Warner Cable Arena in Charlotte. It was Livingstone’s first victory in the CIAA tournament championship game.
The final victory came after the Blue Bears beat St. Augustine’s University on Thursday and Fayetteville State University on Friday night.
Freshman Tiffani Edwards said she was excited to see the team win the championship.
“It feels great to know our basketball team worked so hard for this,” she said.
“They’re always at the gym, even late at night,” said Brianna Aradrey, also a freshman.
“Even on break, they’re practicing,” Edwards added.
The girls said the atmosphere on campus since the win has been “fun” and “happy.”
“We have a lot of school pride,” Aradrey said.
Livingstone students, staff and alumni showed great pride in the Blue Bears — not just in their prowess on the court, but in their academic aptitude as well. The team had the highest grade-point average of the 12 men’s CIAA teams.
“It’s a big achievement,” said Tony Cooper, lead academic advisor with TRIO Student Support Center.
Not only did the basketball players win the tournament, but they also have academic skills that will last “beyond the tournament,” he said.
William Coleman, an alum of the college, came out for the parade. He came to Livingstone on a basketball scholarship in the ’80s.
“I’ve waited 30 years for this,” he said. “I’m ecstatic.”
He said the men’s basketball players are scholars and athletes.
“They’re going to be leaders when they leave here,” he said.
Last year, the men’s team made it to the CIAA finals but lost to Bowie State University. In 2011, they lost in the finals to Shaw University.
Raymond Phillips, a junior studying criminal justice, said he’s proud of the Blue Bears.
“We’re taking strides to accomplish what we need to accomplish and we are growing as a family,” he said.