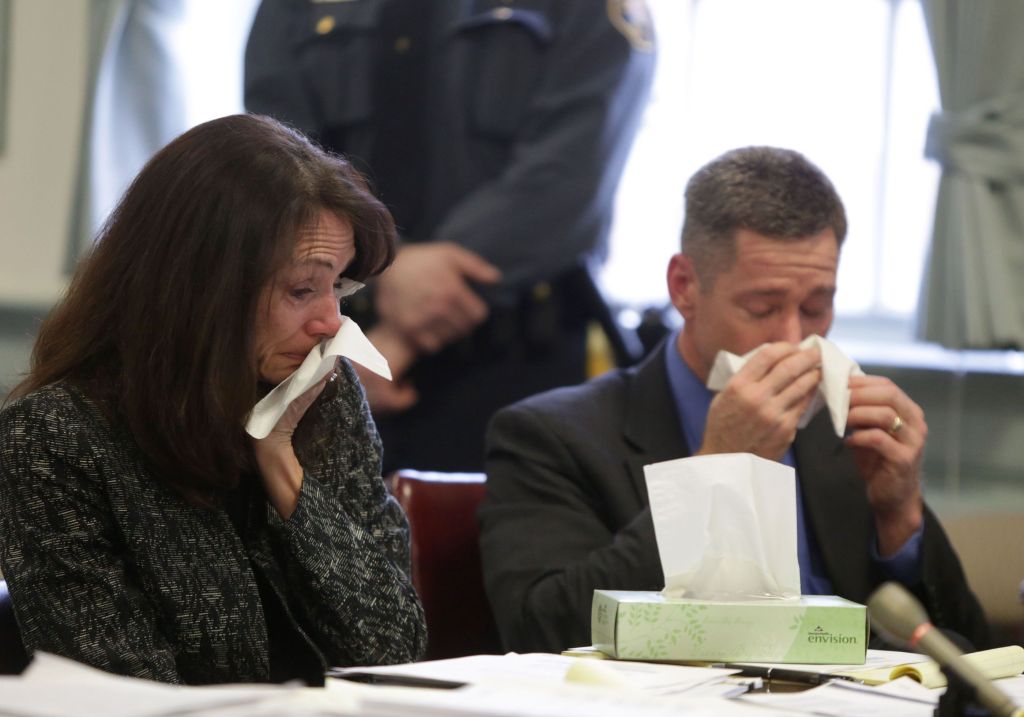 MORRISTOWN, N.J. (AP) — A northern New Jersey honor student who has sued to get her parents to support her after she moved out of their home had her initial request denied Tuesday by a judge who cautioned that the case could lead to a “potentially slippery slope” of claims by teenagers against their parents.
Rachel Canning had sought immediate relief in the form of $650 in weekly child support and the payment of the remainder of her tuition at Morris Catholic High School, as well as attorney’s fees.
State Superior Court Judge Peter Bogaard denied those motions but ordered the parties to return to court on April 22, when they will present evidence and testimony on the over-arching question of whether the Cannings are obligated to financially support their daughter. Rachel Canning, a high school senior, has already been accepted by at least one college and is seeking to have her parents pay some or all of her tuition, attorney Tanya Helfand told Bogaard Tuesday.
Dressed in her school uniform and with several friends in the gallery, Rachel Canning didn’t speak to reporters after the hearing.
Bogaard sounded skeptical of some of the claims in the lawsuit, saying it could lead to teens “thumbing their noses” at their parents, leaving home and then asking for financial support.
“Are we going to open the gates for 12-year-olds to sue for an Xbox? For 13-year-olds to sue for an iPhone?” he asked. “We should be mindful of a potentially slippery slope.”
Court documents show frequent causes of parent-teenage tension — boyfriends and alcohol — taken to an extreme. In the filings, there are accusations and denials, but one thing is clear: the girl left home Oct. 30, two days before she turned 18 after a tumultuous stretch during which her parents separated and reconciled and the teen began getting into uncharacteristic trouble at school.
In court filings, Canning’s parents, retired Lincoln Park police Chief Sean Canning and his wife, Elizabeth, said their daughter voluntarily left home because she didn’t want to abide by reasonable household rules, such as being respectful, keeping a curfew, doing a few chores and ending a relationship with a boyfriend her parents say is a bad influence. They say that shortly before she turned 18, she told her parents that she would be an adult and could do whatever she wanted.
She said her parents are abusive, contributed to an eating disorder she developed and pushed her to get a basketball scholarship. They say they were supportive, helped her through the eating disorder and paid for her to go to a private school where she would not get as much playing time in basketball as she would have at a public school.
Helfand told Bogaard in court Tuesday that Rachel Canning learned her behavior from her parents, particularly her mother, with whom she has a difficult relationship.
“These people who call themselves loving parents paint the most disgusting portrait of their daughter” in the court filings, she said. “They are pointing the finger to avoid their parental responsibilities.”
A cheerleader and lacrosse player who hopes to become a biomedical engineer, Canning wants the judge to declare that she’s non-emancipated and dependent as a student on her parents for support
Attorney Laurie Rush-Masuret, representing the Canning parents, called Rachel Canning’s claims “outrageous” and said that by leaving — and by the fact that she is 18 — Rachel Canning “emancipated herself” and shouldn’t count on her parents’ support.
“There is no abuse. There is no neglect,” she said. “They are not unfit parents. She could come home tonight.”
Rachel Canning has been living in Rockaway Township with the family of her best friend. The friend’s father, former Morris County Freeholder John Inglesino, is paying for the lawsuit.